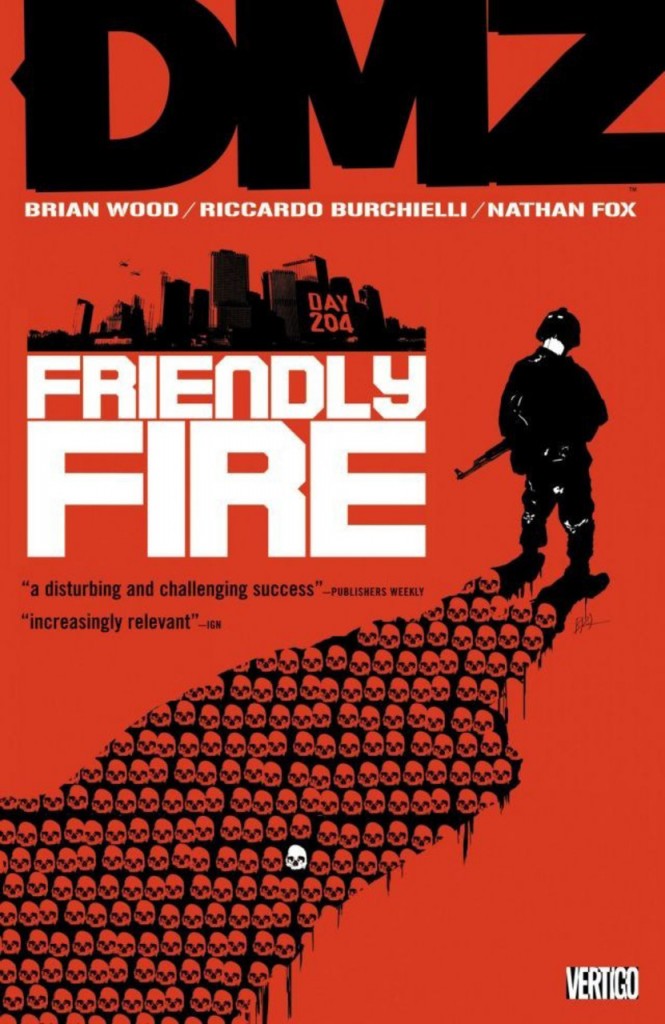 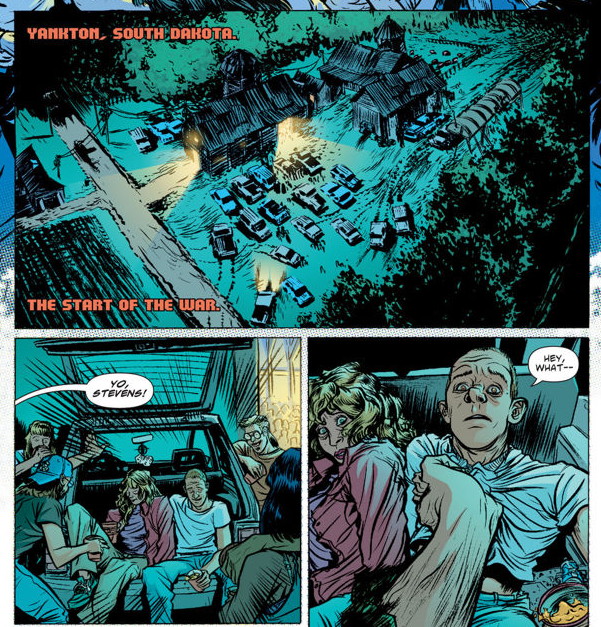 Public Works was a distinct step up for DMZ with writer Brian Wood finding his inspiration in real world headlines. From that point situations transposed from Afghanistan and Iraq found their way into the title and Friendly Fire focuses on a soldier on trial for an atrocity.

Wood leads us in cleverly, revealing Private Stevens is in jail and that the eyes of the world are on the USA, but the reason he’s there isn’t revealed until a thorough portrait of the man has been constructed. Stevens is an uncomplicated and almost nerdy backwoods boy, a victim in his home town given the ultimatum of joining the army or serving time. Thrown immediately into conflict without training he’s emotionally incapable of handling the constant barbarity he experiences, and when the war changes from armed conflict to urban guerilla tactics there’s the added pressure of fear as a constant companion. For most it’s not a question of whether they’d snap, but when.

The sections where Stevens relates his story are illustrated in a manic, claustrophobic style by Nathan Fox, who’s studied Paul Pope. The art accentuates the horror of his day to day life, persecuted on all sides. Also involved is a Sgt Nunez, an unforgiving man who revels in violence, convinced he’s fighting for a cause. Viktor Kalvachev draws his segments of the story, and there’s particularly effective colouring from Jeromy Cox, rendering some scenes in black, white and red, a trick used in Sin City. Roth also talks to survivors, and military brass whose view is of expediency.

There’s a military tribunal, a verdict and consequences leading to a shocking coda. Roth interviews everyone and still doesn’t arrive at a conclusion, so neither does Wood. Is the conversation the point? And does anyone ever learn? Friendly Fire is the best of DMZ to date, and a series highlight overall. The remainder of the book is drawn by Riccardo Burchielli, excellent as always, and the next volume The Hidden War is a change of pace. They both collected along with Public Works in the hardback DMZ Deluxe Edition book two.