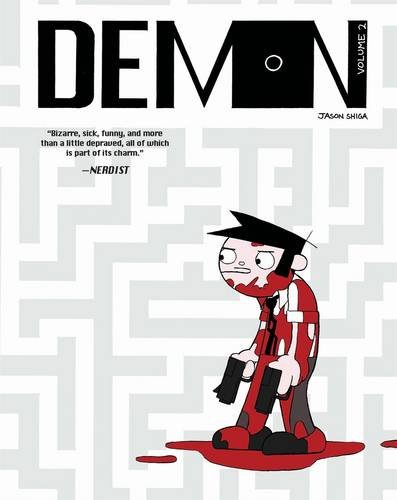 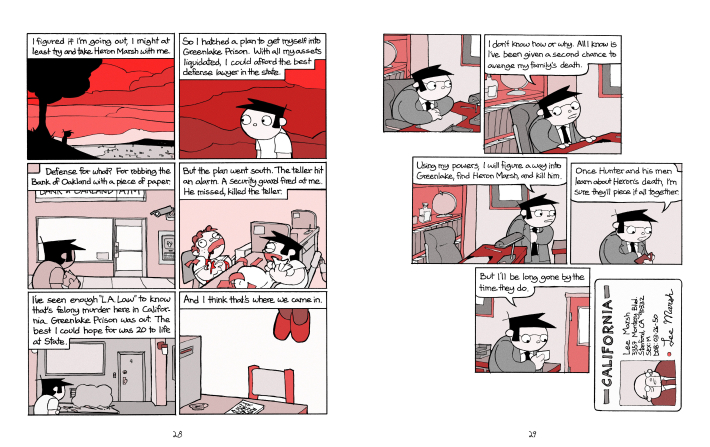 Beyond the opening volume it becomes very difficult to discuss Demon without giving away aspects of the plot deliberately supplied as mystery until late in that first volume. If you’d prefer not to know, don’t read beyond the second paragraph.

Jason Shiga’s economical art style again serves him well in covering a lot of ground while still able to slow down the pacing when needed. It’s almost pictograms in places, lacking much in the way of backgrounds unless absolutely necessary, and throw in the often blank faces and its astounding there’s any emotional pull at all, but there is. As much as anything it’s horror at what Jimmy has become.

The book is titled Demon for a reason. At its most superficial it’s the face value provided as Shiga explained what was happening, but it’s equally applicable to Jimmy and how he now views the world. Initially this is as one large experimental playground. After several suicide attempts failed, Jimmy figured out that every time he died, his consciousness transferred to the nearest body, concluding this is because he’s possessed by a demon. Shiga came up with a very clever method of setting up this puzzle in volume one, and here Jimmy works with the parameters of transference. Of necessity this involves a large corpse count, and Jimmy’s seemingly unable to appreciate the irony of what he’s doing as having the eventual purpose of confronting the drunk driver that killed his wife and child.

Jimmy able to switch bodies instantaneously is wonderfully conveyed by Shiga, and the realities affecting this have a precision reminiscent of the ability to kill from a distance used in Death Note. It’s all part of the puzzles Shiga likes to set, presumably deriving as much joy from conceiving the solutions as we do from gasping at their audacity. While Jimmy’s figured out what he can do, so have the authorities, who are determined that Jimmy will work for them. Shiga underlines the tenacity of the agent in charge by naming him Hunter.

The first volume of Demon was a thrill ride, and here the consequences are higher and play out in startling fashion. Once again Shiga hooks with the plot and can reel us in for volume 3.