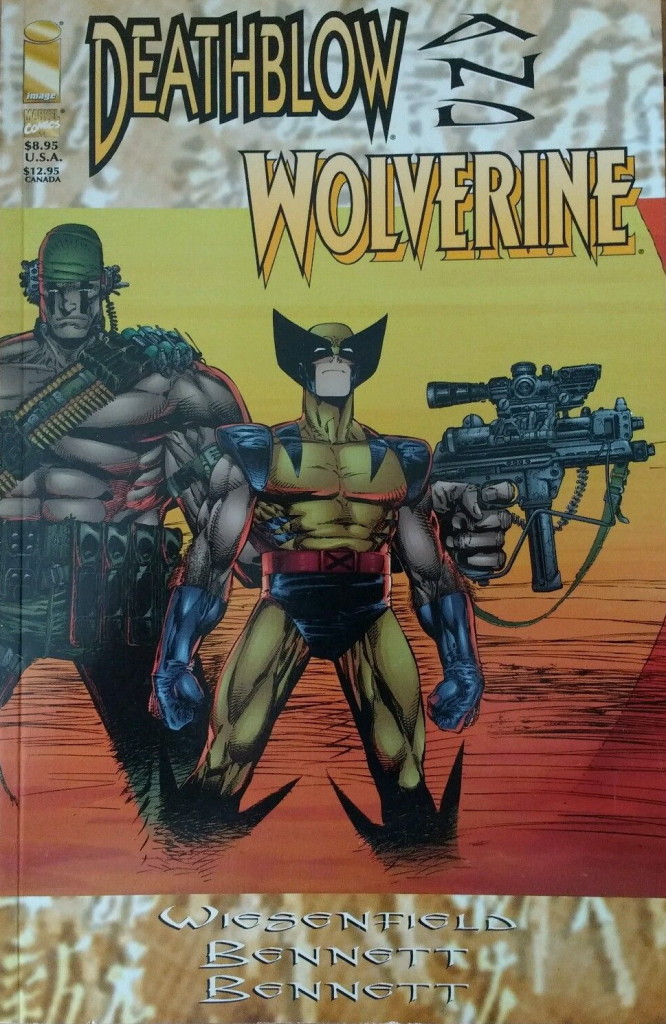 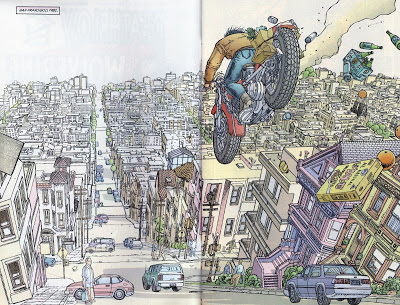 This very slim book proves two common adages. The first is that you can’t judge it by its cover, which is decidedly average and off-putting, and the second is that quantity is no indicator of quality. At at just over sixty pages this says what needs to be said and waves goodbye. Given the complicated trajectory of Deathblow’s ownership from Image to Wildstorm to DC and Wolverine being a Marvel character it’s unlikely this will be reprinted any time soon, and that’s a pity. The good news is that used copies aren’t extortionately priced.

Take a look at that sample image. Aron Wiesenfeld, credited with breakdowns, has knocked himself out with that detail. It approaches Geof Darrow-like obsession, and this isn’t just the single page to sucker the reader in, he and finisher Richard Bennett continue in that manner throughout. The next page features the most lovingly rendered pavement you’ll ever see, complete with cracks, joins and a service hatch. Cars, motorbikes, weaponry, architecture and scenery are equally carefully rendered. A Chinese legend is drawn as if by P. Craig Russell, and when some ninjas appear in the final pages Wiesenfeld piles them up in Frank Miller fashion. The final few pages are rushed in comparison, although, still serviceable, possibly the result of the original editor finally losing patience as deadline after deadline was blown.

Wiesenfeld’s also responsible for the story, which kicks off in 1982 with a domestically contented Wolverine living with a Chinese girlfriend in San Francisco. The joy doesn’t last as the first of the ninjas crashes through a window, resulting in Wolverine with two arrows in his back leaping down to the street directly in front of steroid infused mercenary Deathblow. Beyond the occasional “unngga”, “snort” and “oww” there’s barely a word over the following thirteen pages, which instead concentrate on some superbly choreographed action.

The plot avoids the two heroes battling over a misunderstanding, but it’s no coincidence Deathblow was outside Wolverine’s house. There’s good use of Wolverine’s senses and of Deathblow’s combat expertise as the circumstances escalate to world-threatening events based on what was presumed to be an old Chinese myth. Everything leads up to a well-concealed pay-off, if one that’s slightly illogical.

It’s a simple story, exceptionally well told. Wiesenfeld later decided comics weren’t for him after all, and now earns his living as a painter. 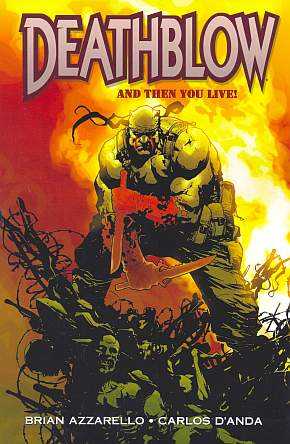