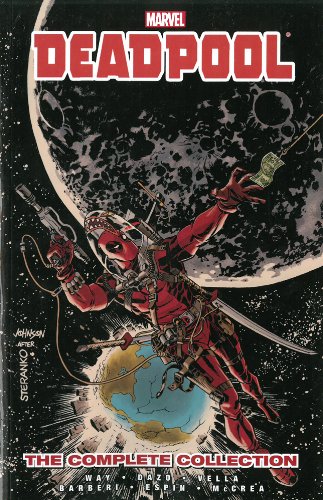 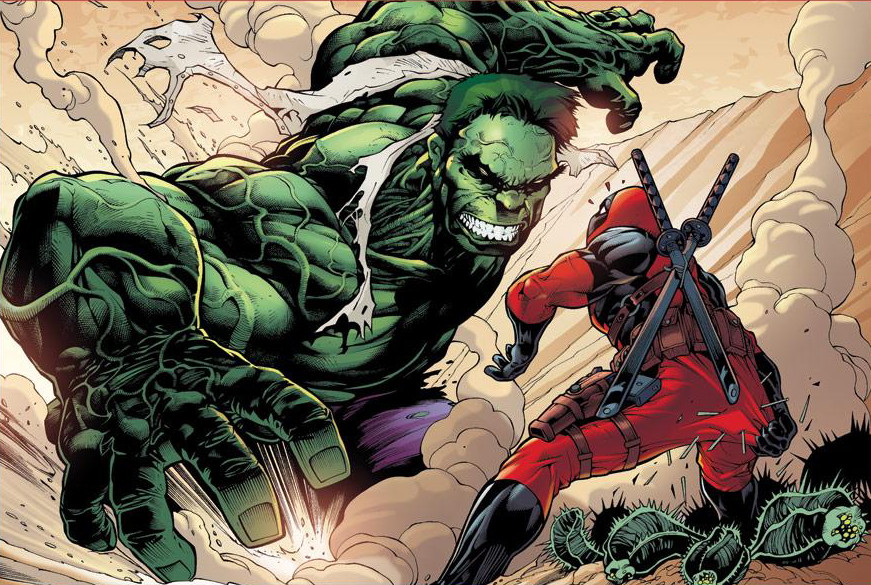 The material in this bulky aggregation of what was previously five trade paperbacks showcases the astonishing variety that Daniel Way brought to Deadpool. We begin with Deadpool investigating someone who’s framing him and conclude with ‘Deadpool the Musical’. Between that there’s Deadpool in space, Deadpool attempting suicide, Deadpool institutionalised, Deadpool impersonating the Queen of Britain, and Deadpool up against his evil twin. It’s a lot of Deadpool, and a fair quantity, particularly in the final third of the book, is a lot of fun.

As has been the case throughout the series, the artwork is variable, although there’s little that’s poor here. Bong Dazo frustrates to begin with, but his stunning layouts, penchant for comedic detail and wildly distorted exaggerations come into their own when Deadpool takes on the Hulk. It doesn’t work all the way through as a story, but Dazo’s Hulk is the wildest since Ed McGuinness.

Most of the artwork is by Carlo Barberi, who’s solid in a cartoon style, but is shown up when Salva Espin takes a similar approach and delivers better looking pages. John McCrea’s comedic technique is exactly right for ‘Deadpool the Musical’, but the idea falls flat, and Sheldon Vella’s opening slot works well, but his return has a hurried quality.

Way’s plots are consistently inventive, if not always delivering the fun you’d hope for. That applies to ‘Space Oddity’ where Deadpool sows his manic form of confusion across the Universe, back ending into dealing with a substantial danger, as he so often does. The better plots here are on a smaller scale, with Deadpool institutionalised the best on offer. It’s a little lighter on the gags, although there are plenty present: “Half these guys I dropped with a falafel cart that I modded with a sweet-ass thirty-cal minigun. And they don’t even have falafel carts in Pakistan. I had to have one flown in.” The reason for the change of approach is Way presenting a psychoanalysis of Deadpool, or the nearest we’re ever going to get, and it draws us in.

Also good is Deadpool pitted against his evil counterpart, not least as it answers the question that’s surely bugged Deadpool fans for a long time. As he frequently loses a limb, then regenerates, what would happen if his lost parts were united? Conveniently, there’s a fridge containing a full set located here.

As well as the Hulk playing a pivotal role, Captain America drops by again, first convinced that Deadpool needs to be removed from society, and later wondering if an even more extreme solution is required.

This is a value for money collection, but for those who’d prefer, the content can be located individually as Space Oddity, Operation Annihilation, Institutionalized and Evil Deadpool.