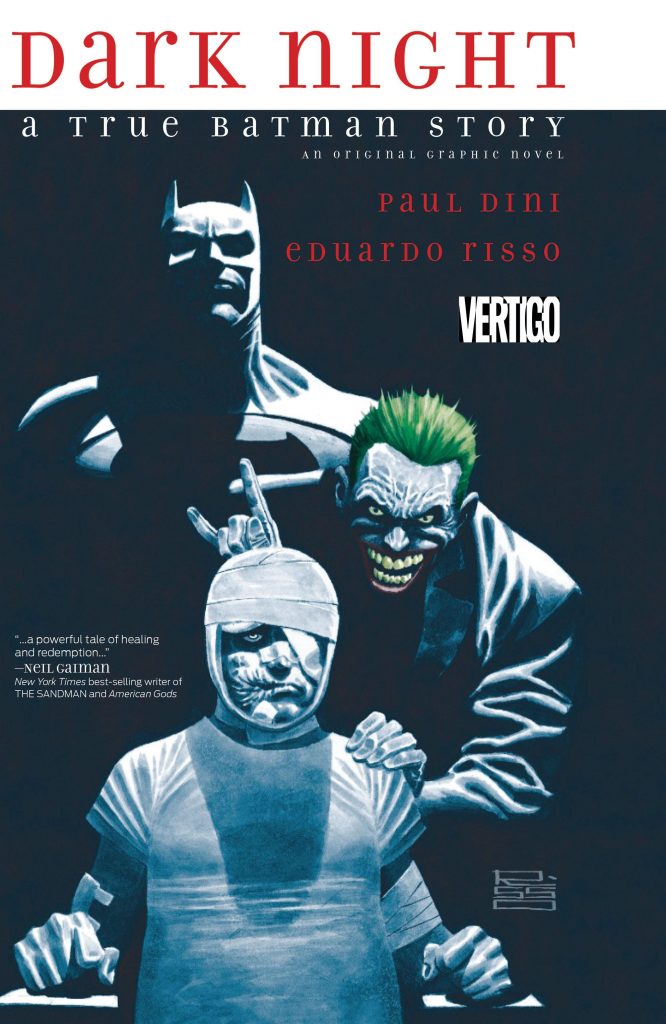 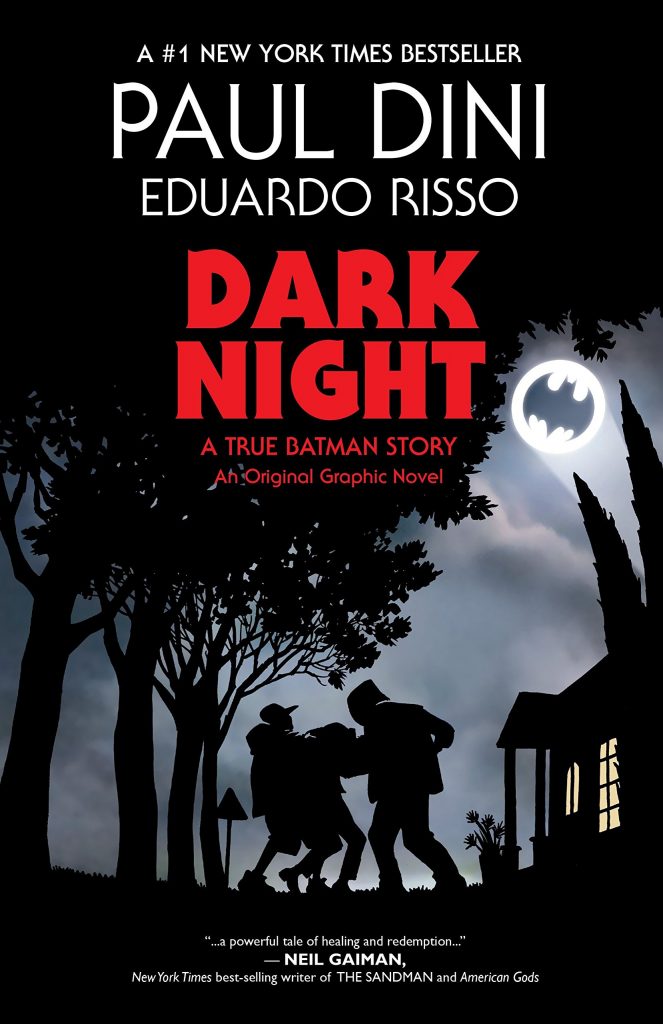 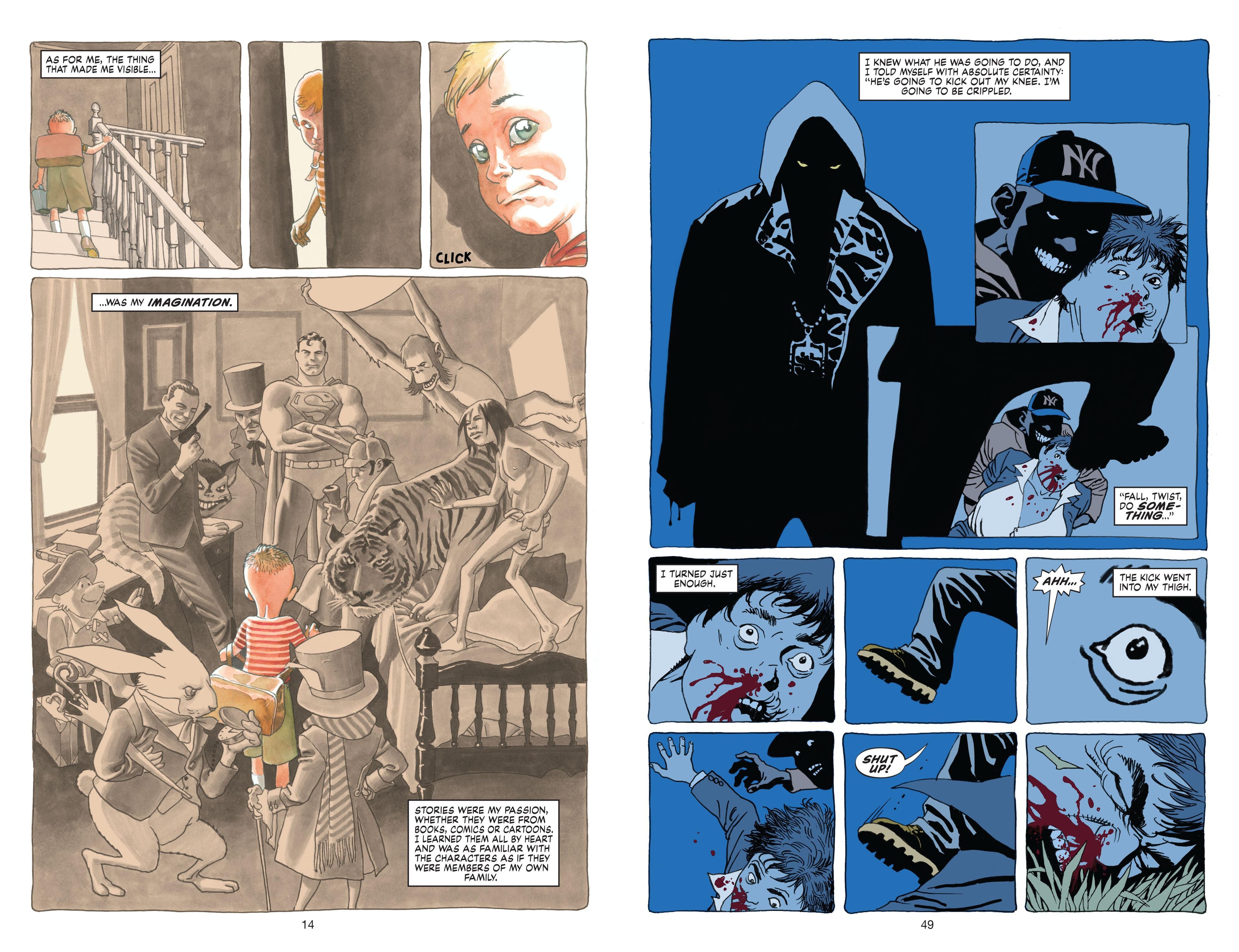 Paul Dini’s relationship with Batman is more complex than we might imagine from knowing he writes Batman comics and was key to several Batman animated series. Dark Night opens with the horror of severe personal injury to create a sense of anticipation, before dropping back to Dini’s withdrawn infancy and how his relationship with Batman developed, running parallel with therapy sessions. The heyday of the animated Batman show is marked by an almost non-existent relationship with an actress, which leads to the night Dini was mugged, feared for his life and eventually required considerable surgery to reconstruct his face.

He’s set this up. We know it’s going to happen, but the severity is shocking, a comic style brutal beating applied to real events. Muggings happen a lot. People aren’t generally killed, so the news isn’t interested. If the news isn’t interested an over-stretched police department aren’t motivated. Dini’s attack occurred in Los Angeles, but duplicated throughout the USA and beyond, yet there are considerable consequences for the victim. Scars are both physical and emotional, and unless we know someone who’s been mugged and have seen their long road to wellbeing Dark Night offers an insight perhaps not otherwise considered. Dini lays out his experience honestly, but beyond the attack, which is the culmination of a prolonged period of coping on the surface, yet not beneath.

If Dini’s confessional style occasionally makes the jaw drop, so do Eduardo Risso’s pages. Almost all his work for the USA has been a densely shadowed noir realism, and that works well enough for several scenes, especially when he draws Batman. As that approach would be inappropriate for much of the rest of the story, Risso gives us what’s only been glimpsed before in the odd panel here and there. He’s an excellent cartoonist, one of the sample pages delivering assorted fiction icons each in their own style, but merging impressively. However, his use of several styles comes a little unstuck as it reveals his painting isn’t as strong as his line art, with Dini’s head oddly cubed in some panels, but his slightly distorted versions of Batman’s villains are nice.

Batman plays several roles beginning as idealised wish-fulfilment figure, and ending as the personification of self-guilt. There’s a fair bit of that. Recovering from injuries permits plenty of reflection about previous selfishness, filtered through Dini’s romantic history, an old-fashioned word that applies due to the fantasy of his expectations. There is no great epiphany to end, just a gradual road to normality and the eventual consignment of his experience to an occasional bad memory. Dini acknowledges a positive in that no matter how painful the mugging and subsequent weeks were, it led to choices that have improved his life. Perhaps some more reflection on Dini struggling to write Batman again in the wake of the attack would have been appropriate, and for a confessional piece some elements are unclear. Is Dini’s editor deliberately pushy because he knows what’s best or is he portrayed that way because there’s some resentment on Dini’s part? Is his therapist provocatively drawn because there’s some underlying attraction? She’d probably have some comments about her portrayal. Finally, Dini knows his way round a story, and while good narrative reasons exist for him to be guiding us through his own story, it also leads to a disconnect at powerful moments, moments when captions would have been more effective.

The best autobiographical material offers experiences or insights most people don’t have. On that basis Dark Night scores as an honest and engrossing read, but it’s flawed.