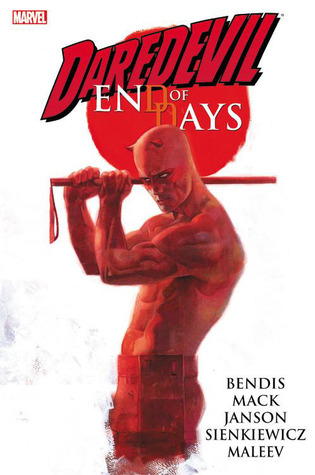 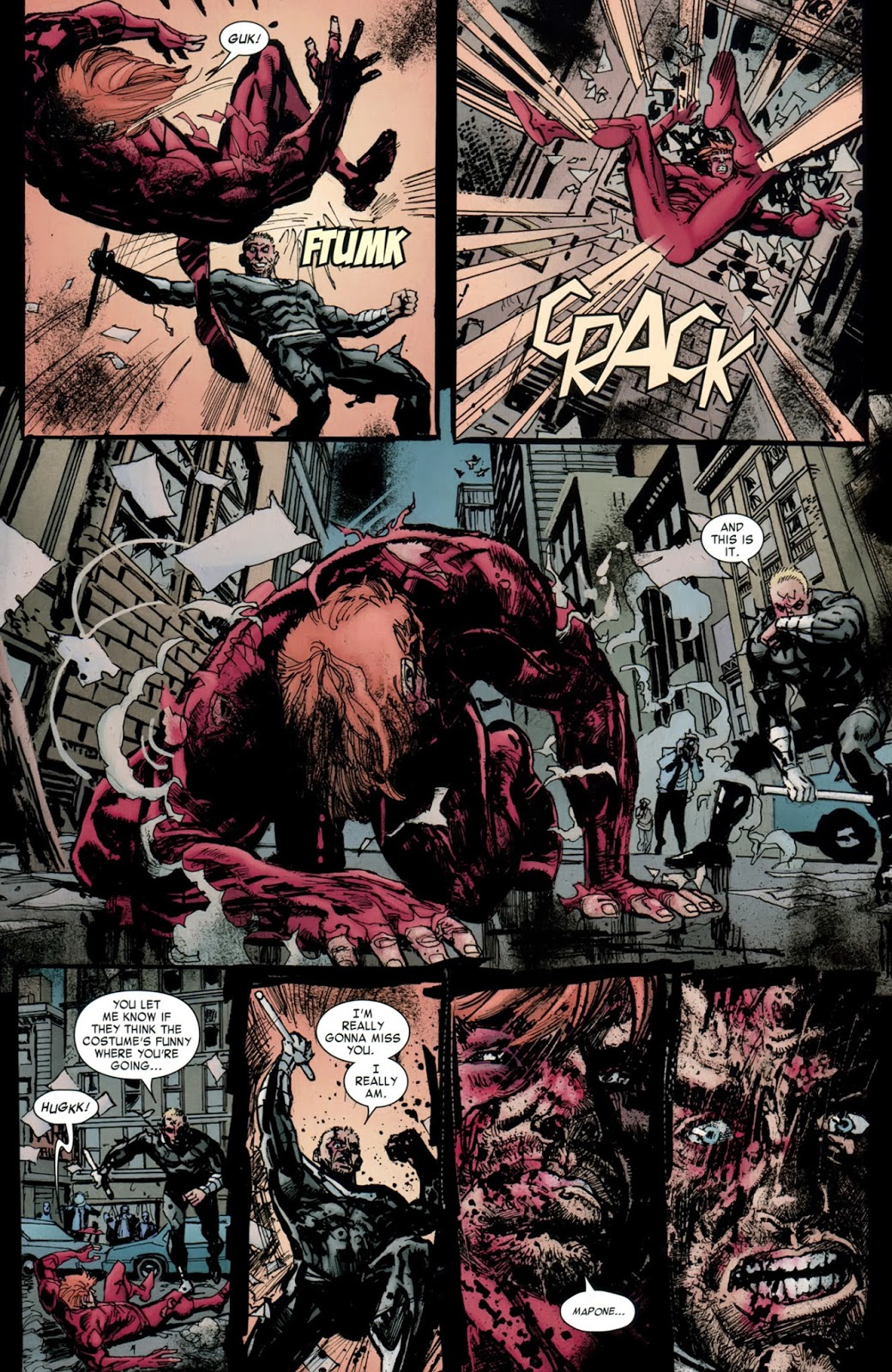 Staring in the late 1990s Marvel published a whole selection of graphic novels relating a possible version of their characters’ final days. They took one hell of a time to get around to Daredevil. If Frank Miller wasn’t available, then the best man for the job was Brian Michael Bendis, writer of the character’s second most iconic run, and he undertakes the task partnered with David Mack, who also contributes what in effect is pin-up portraiture.

There is no mystery about Daredevil’s actual death. It occurs in the opening pages with Matt Murdock battered to death by Bullseye after a brutal battle depicted in gratuitously bloody fashion by the art team of Klaus Janson and Bill Sienkiewicz. Brutality is a theme of the book, and colourist Matt Hollingsworth uses a lot of red despite Daredevil’s costume being largely surplus to requirement.

Before his death Daredevil had been unseen for five years following another very bloody incident. It’s left to investigative reporter Ben Urich to piece together what’s missing, including the cryptic word “Mapone”, the last uttered by Daredevil. Bendis and Mack’s source is obvious (and acknowledged), and armed with the single word Urich begins circulating around those who knew Daredevil in the past. Bendis and Mack are very thorough. They don’t quite conceal what becomes the big revelation ending the penultimate chapter well enough, but as it’s not really the point of the piece, End of Days survives this. The associates Urich meets are well characterised, and because some time has passed since Daredevil was active some have progressed upward from their previous levels, and that’s well handled also. Bendis and Mack are, however, perpetrating a con here. This isn’t so much the end of Daredevil, but an investigation of Daredevil’s legacy leading to the birth of Daredevil. They take a different approach, but it would appear that The Dark Knight Returns and its themes of redemption and resurrection very much influenced End of Days. Bendis has always been good with a sort of clipped underscore as Urich’s voice, and it works again here: “End of the day… Hell’s Kitchen just stood there and watched him die.”

Much of the acclaim for the tone has to land upon the artwork. Both as a penciller and an inker Janson has a gritty moodiness to his art, and that’s only accentuated by working with Sienkiewicz, who tempers his own distinctive style to present Janson at his best. Their pages drip atmosphere, and there’s some playful homaging on Janson’s part (and that of the writers). As every creator involved has worked on a memorable Daredevil story standing the test of time, it’s very much a case getting to old gang back together again. Despite his prominence on the cover, however, Alex Maleev’s contribution is only two pin-up illustrations overlaid with dialogue captions.

This isn’t the best Daredevil story Bendis has written, but it touches all bases, throws back very nicely to a previous collaboration between Bendis and Mack, and the advice is not to become fixated on the puzzle, but head with the flow.