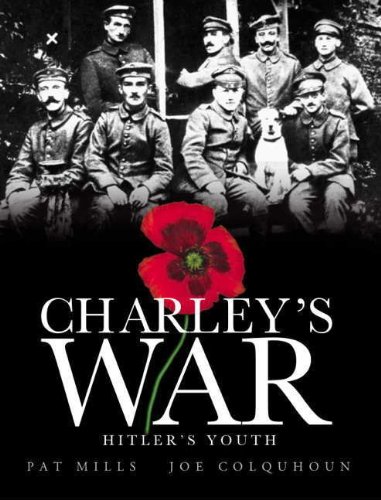 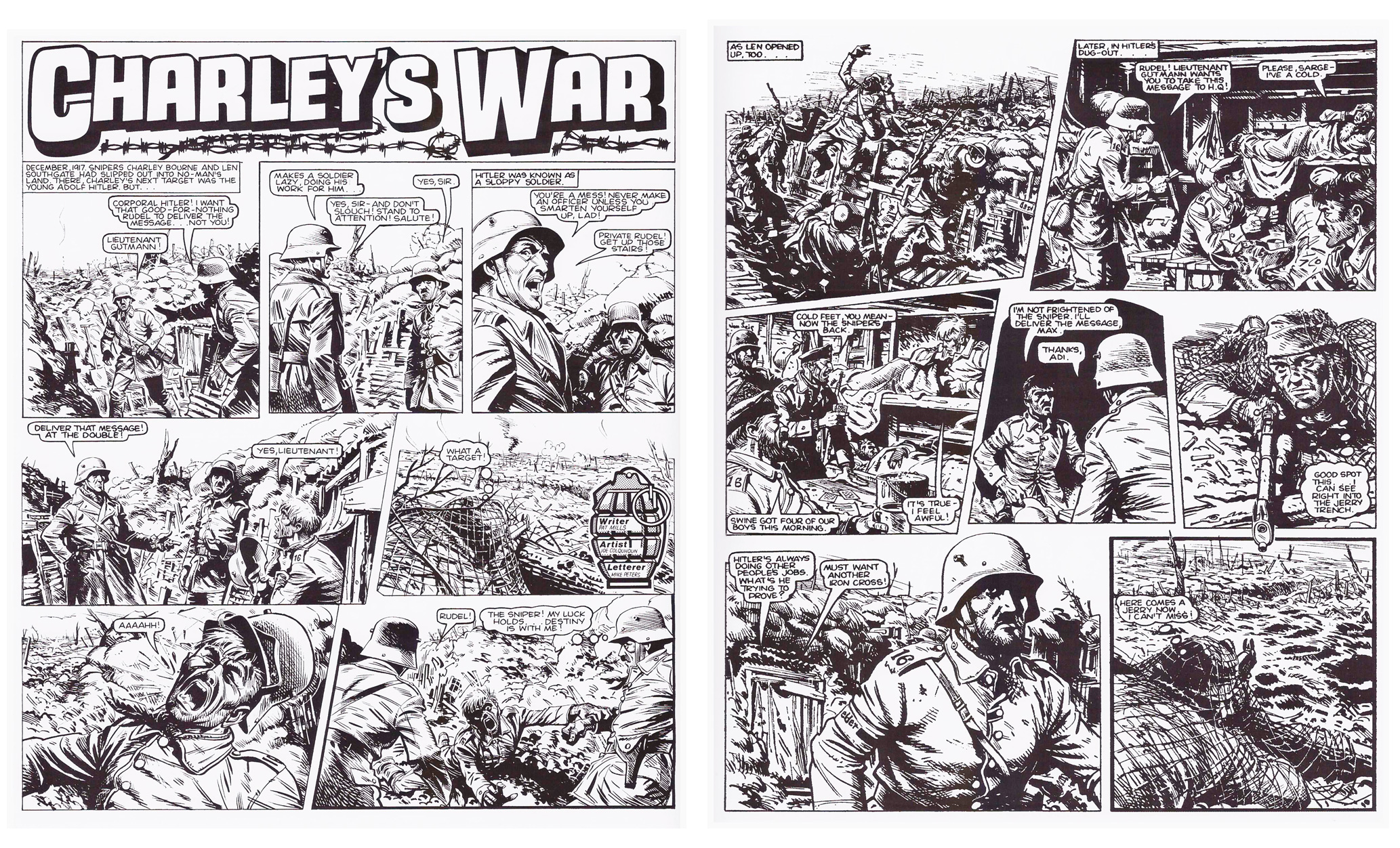 Charley ended The Great Mutiny as assistant to his regiment’s chief sniper, who has been targeted with assassinating a persistent German messenger, one Adolf Hitler.

Pat Mills was playing an interesting and provocative game introducing Hitler’s World War One service into Charley’s War, less apparent in hindsight when the strip’s not surrounded by its more gung-ho World War II material in the weekly Battle. Mills stands by the thoroughness of his research, and fills in some speculative elements around what’s been documented about Hitler’s trench experiences. It’s an interesting approach requiring readers to distance themselves from the monster he became and instead sympathise with an ordinary, if overly patriotic and ascetic, Austrian solider within a German regiment. This is additionally a very brave man, twice awarded the Iron Cross for his exceptional actions in combat.

The initial plot concentrates on the precarious trade of sniping, the hardships endured in establishing a target and the dangers of the sniper’s concealed position being revealed. Hitler’s zealotry is depicted as irritating his comrades, and his final appearance is after a sequence adapting the then less known football match between the British and Germans on Christmas Day 1917.

We should be thankful to Titan for ensuring the entirety of Charley’s War eventually saw book publication, and this volume has the added bonus of many pages being scanned from Joe Colquhoun’s original art rather than reconstituted from printed versions. Unfortunately, as the sample art displays, they only serve to accentuate the massive loss of detail in the pages Titan usually had access to. Colquhoun’s naturalism is exceptional. There’s no posed heroism in the strip, and he resists the temptation to exaggerate Hitler.

All Colquhoun’s skills are required for the plot occupying the larger portion of this book. Charley Bourne is sidelined in favour of his younger brother Wilf who lied about his age to join the Flying Corps. Mills highlights the jealousies and class conflicts among men whose life expectancy was marked in weeks rather than years, with their kill totals being their legacies, and this feeds into resentments that could have fatal consequences. In keeping with the remainder of the strip, Mills resolutely dismantles any idea of romantic heroism from codes of honour.

Once past the earliest episodes when the future of the strip was uncertain, Mills strived for a realism in Charley’s War, and exceptionally rarely sacrificed this for a dramatic plot twist. As he’s mentioned in his notes accompanying these reprints, so fantastic was the reality there was no need to exaggerate. This volume includes several items that might be considered fantasy, yet all were real, including the ludicrously fashioned body armour intended to protect snipers.

George Evans’ work on Aces High, now collected by Fantagraphics, has long been considered the gold standard when it comes to comics depicting aerial combat in World War I, but Colquhoun’s pages actually have a greater elegance. There’s less concentration on glorious dogfights, and more on the people within in the planes, and the combination has an emotional resonance largely absent in Evans’ work.

The series continues in January 1918 with Death from Above.