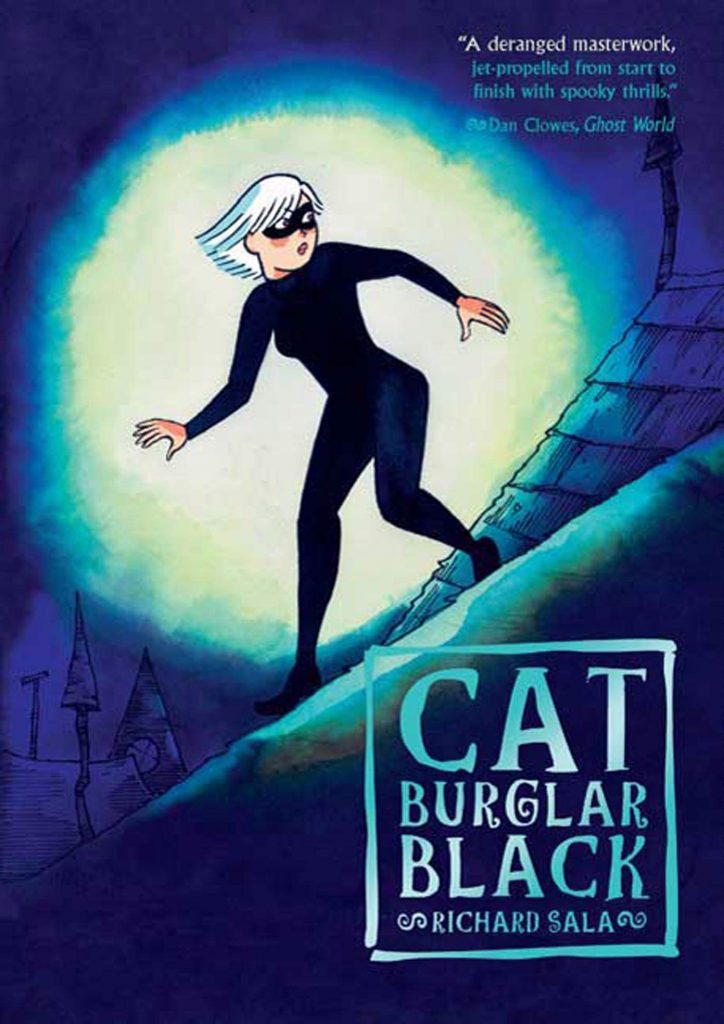 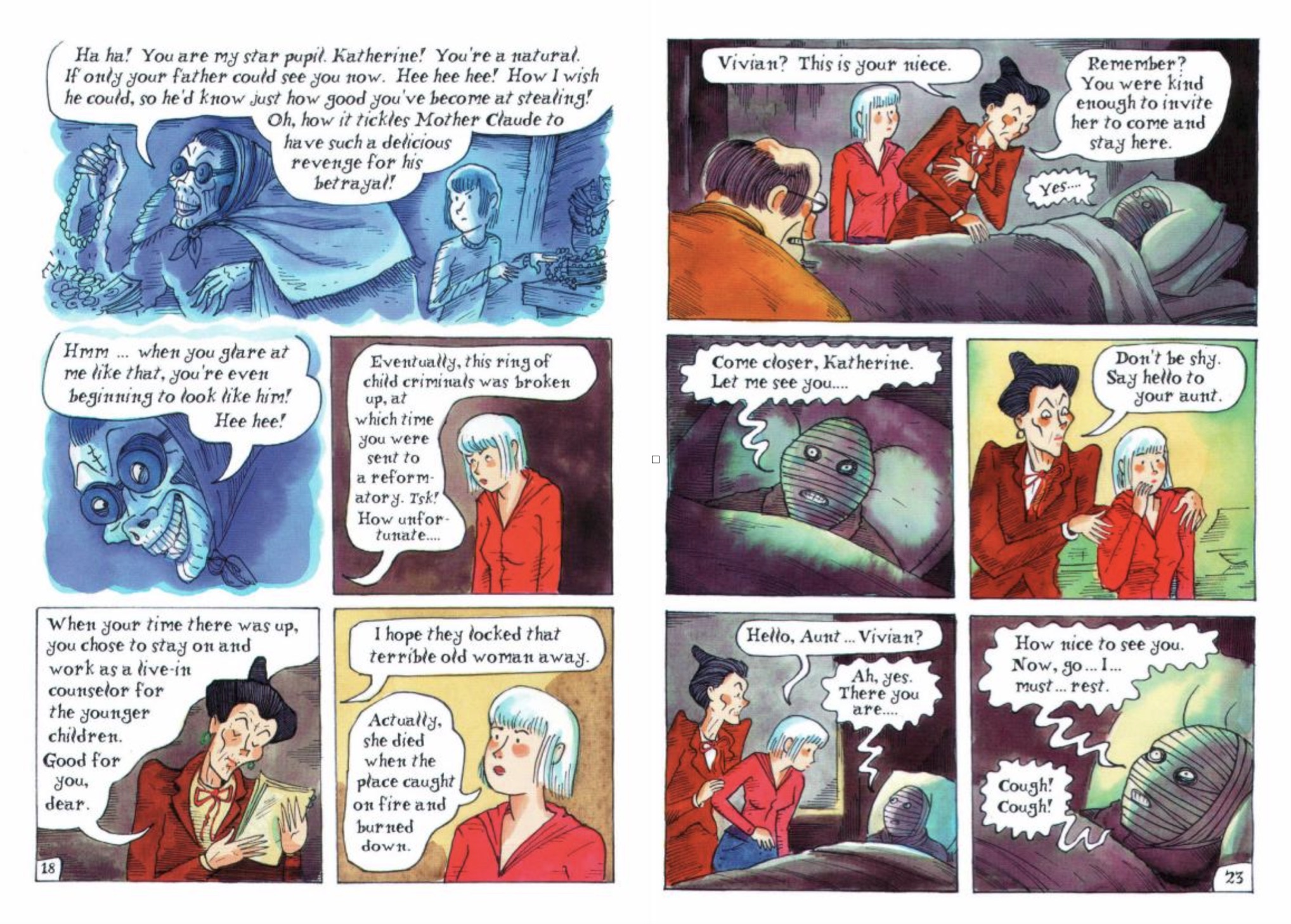 The cover of Richard Sala’s Cat Burglar Black captures his teenage heroine’s situation. Primed in costume, she’s poised to pluck her prize, but looks back – either uncertain she is doing the right thing, or checking on her classmate accomplices. It entertains as a young adult book, though Sala’s playful use of literary devices will appeal to more sophisticated readers.

For a short graphic novella (120 pocketbook pages) Sala constructs an intricate story and backstory. Katherine ‘K’ Westree, teenaged, but rocking her dead family’s premature white hair, received a letter from a lost aunt, that brought her to the mysterious Bellsong Academy for Girls. Schoolmarm, Mrs Turtledove, knows more about ‘K’ than she knows herself. Following the deaths of her acrobat parents, she was entrusted to Mother Claude, whose orphanage doubled as a crime school. Katherine is trying to escape this past, but the Academy does not intend to let her, as this is a caper story. Typically for modern iterations of the genre, the heist provides a focus for exploring character, group dynamics and ‘community’, which in this case is the Academy, with its hazardous features and ambivalent history. If that all sounds comically elaborate, it’s deliberately so.

Sala is best known for his ironic re-appropriations of gothic horror, but that underestimates his range of inspirations. While this is a caper story, it’s also a school story that combines the arcane secrets of Hogwarts, with the attitude and moral flexibility of St. Trinians. It’s also an orphan story, with Mother Claude channeling Fagin from Oliver Twist, tonally though, this is more akin to The Beaudelaire Orphans of Lemony Snicket, who provides cover endorsement. Sala also draws on more highbrow sources: ‘K’ shares a name with the protagonist of Franz Kafka’s The Castle, with each a stranger arriving “in town”, seeking salvation and belonging. Sala’s no mere dabbler, then as there’s an impressive conviction in the breadth and depth of his intertextual plundering. There’s also an artful alchemy in his creating from these disparate sources, a seamlessly entertaining, and distinctively Sala story.

Just as K can decode in some stolen paintings the clues to the location of lost treasure, readers so inclined can spot multiple nods to postmodern literature. Pastiche, fabulation, black humour and the metafictional deconstruction of fiction’s apparatus (the comically over-intricate plotting) are all apparent. Sala also adds a critical and historical perspective in the passing detail of the school being created as philanthropic atonement for the shameful source of the family wealth. That’s a lot packed into a small book.

However, the final trick of Sala’s artistry is to create, from all that, a fast-paced page-turning romp. True, there’s minimal action in the (pre-heist) first half, but ‘K’s backstory and its theatrical unpacking, is arguably the real story, with the heist a mere story-device or MacGuffin.

Sala is a master ink artist, though for this foray into colour, he restrains his mock-historic rendering in favour of skeletal outlines. His watercolour palettes range from autumnal interiors, to al fresco afternoons, to the indigos of the capering hours, and reversions towards monochrome (pictured) for the flashbacks. It’s not his finest art, but it’s vivid and fresh, if occasionally too dark, notably obscuring a plot clue. He would finesse his colouring for later volumes like The Bloody Cardinal.

Ultimately, Cat Burglar Black is a thrilling, comical, and thoroughly literary caper, for young adults and more seasoned ones.