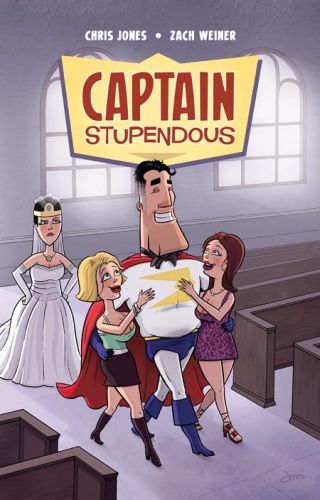 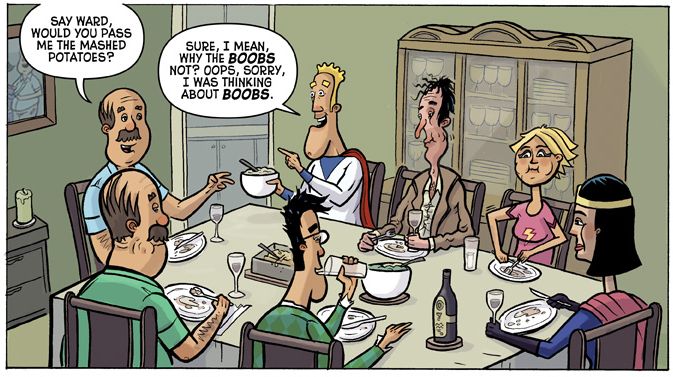 Captain Stupendous is a has-been super-powered womaniser who’s more interested in cruising techniques than in righting any wrongs. His ex-wife, the clairvoyant Ms Mind, is about to remarry a mere non-powered mortal; his son Kid Liberty is discovering that he enjoys ripping clothes off the taut, muscled bodies of super-villains a bit too much; his daughter is a would-be nympho; as for his other son, well, he can barely remember he has another son, since that one is also non-powered.

All along the book, writer Zach Weiner and artist Chris Jones walk a fine line between almost offensive jokes and pointed comedy, essentially making readers laugh and simultaneously making them ashamed to have laughed. Case in point, Kid Liberty: the blond hero’s power isn’t his IQ, obviously, as he doesn’t twig that a no-woman dancing bar might not be full of straight guys, and ends up bedding one of the patrons. This starts a chain of events that will lead him to make a life-changing choice (after protesting his straightness in an increasingly absurd manner), as his no-good father is trying to forget his ex-wife’s upcoming new wedding by spending time in a bar where cheap alcohol and cheaper women can be found–and where his innocent-looking sister finally meets a man to accompany her to the prom. The fact that the man is an avowed paedophile doesn’t seem to matter much to her or anybody else.

The great thing about the authors’ humour is that they manage to tell awfully funny jokes at the expense of the cast and all the while tell a story with actual, if excessive, characters who have some core of feelings that enable readers to relate to them, positively or negatively. Another example of good writing is the way some funny, but seemingly meaningless routines pay off at some point, such as the recurring joke about Kid Liberty’s almost not-there moustache. In the best tradition of Superman’s glasses this prevents everybody from recognising him, or the mention of Sparrow Boy, a possibly gay sidekick (no points to readers who understand which “real” superhero that might refer to).

Jones’ art is a big part of the successful balance between humour and real-life concerns, such as the influence of parents on their kids or people taking control of their lives, or not. His style can be described as cartoony, but in fact, he draws far more realistic people than a lot of mainstream superhero artists. With the exception of the Captain’s mates, the half-crab Maine Event or the living skull Mephisto, the ultimate bad boy who gets all the ladies, Jones’ characters look like people one might meet in the street, and that helps in relating to what are sometimes complete morons. His style might also be instrumental in attracting people who don’t read superhero comics, in preference to a more fashionable artist from Marvel or DC.

Under the guise of sometimes gross humour, Weiner and Jones have created some engaging and believable characters, as well as one of the funniest send-ups of superhero comics available on the shelves.