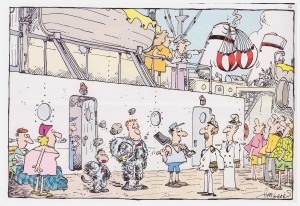 Sergio Aragonés has maintained two separate but parallel careers in comics for several decades now. To many he’s known primarily as a contributor to Mad magazine, and creator of the Mad Marginals, small gag cartoons scattered about the margins and between the panels of other strips. To another audience he’s the creator of inept barbarian Groo the Wanderer. The incredibly prolific Aragonés, though has produced acres of work beyond even those two long-running series.

One of his strengths as a cartoonist is a prodigious imagination able to conceive numerous gags on a single theme, in this instance astronauts. Buzz is a chimp, Bell is human, they’re out in space on a shuttle. That’s pretty well all there is to the theme, except that all the one page gags require no dialogue. Buzz & Bell was conceived as a project for sale around the world, hence the silent gags.

Aragonés’ cartooning is instantly recognisable, and after all these years seemingly effortless. Bell is a gangly, ordinary guy, while Buzz is there not so much as a comedy sidekick, but to underline the gag. They travel the universe, and in cartoon fashion, live together when not in space. The gags vary from the obvious – traffic jams in space – to the surreal – Bell dreaming of God shaking out the universe, but in 44 pages there are very few that fail to induce at least a grin.

A few in-jokes scatter the pages. Groo is seen as Buzz flicks through the TV channels, and Aragonés casts himself as a fairground photographer. This appeared in both hardback and paperback formats.