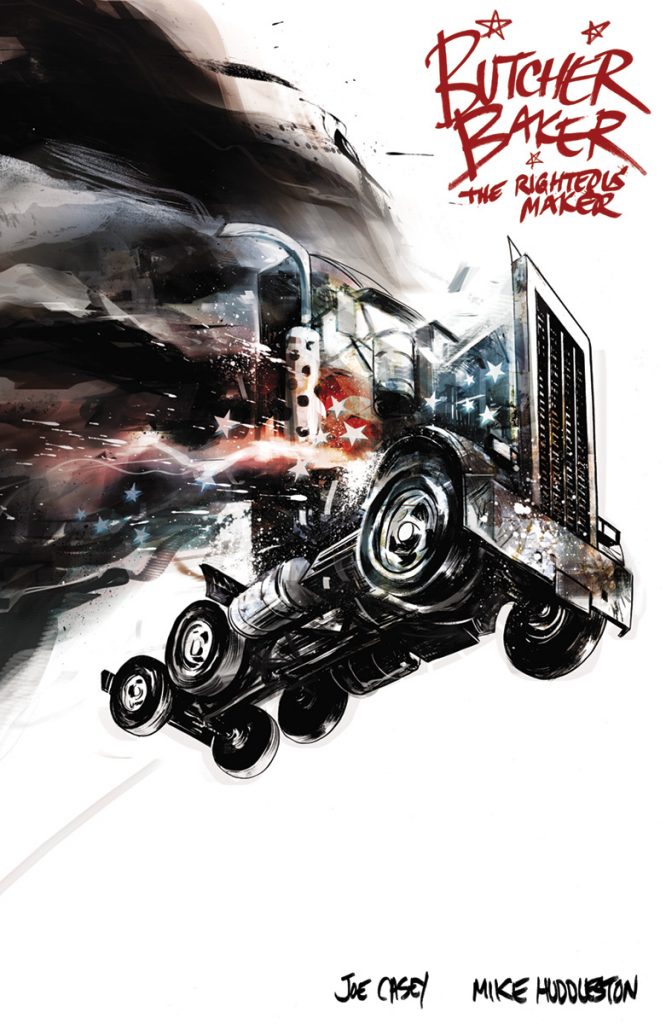 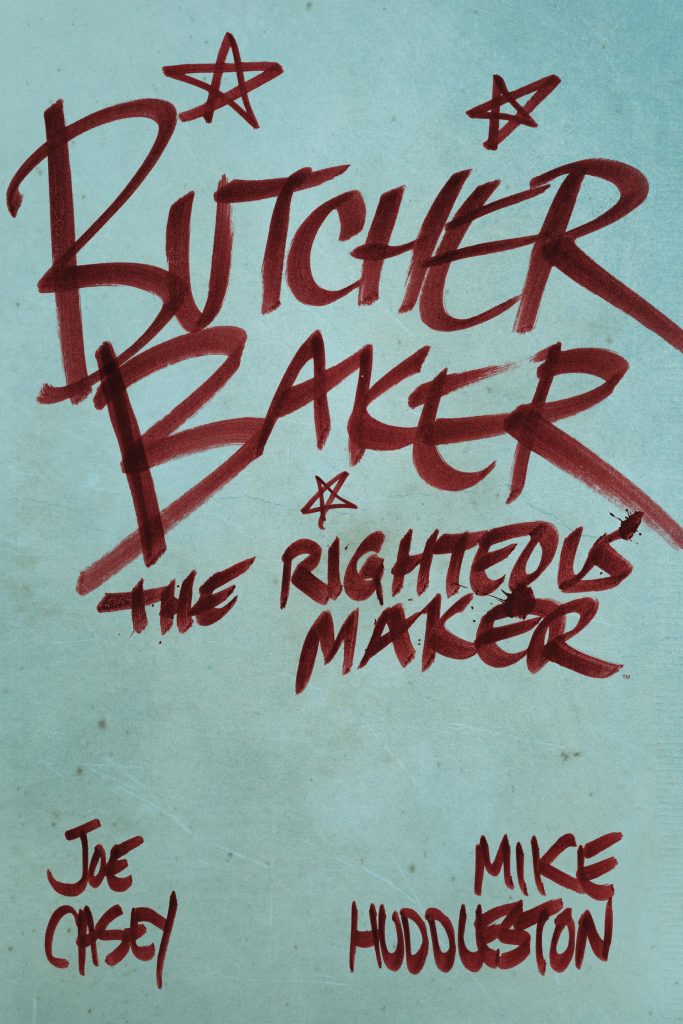 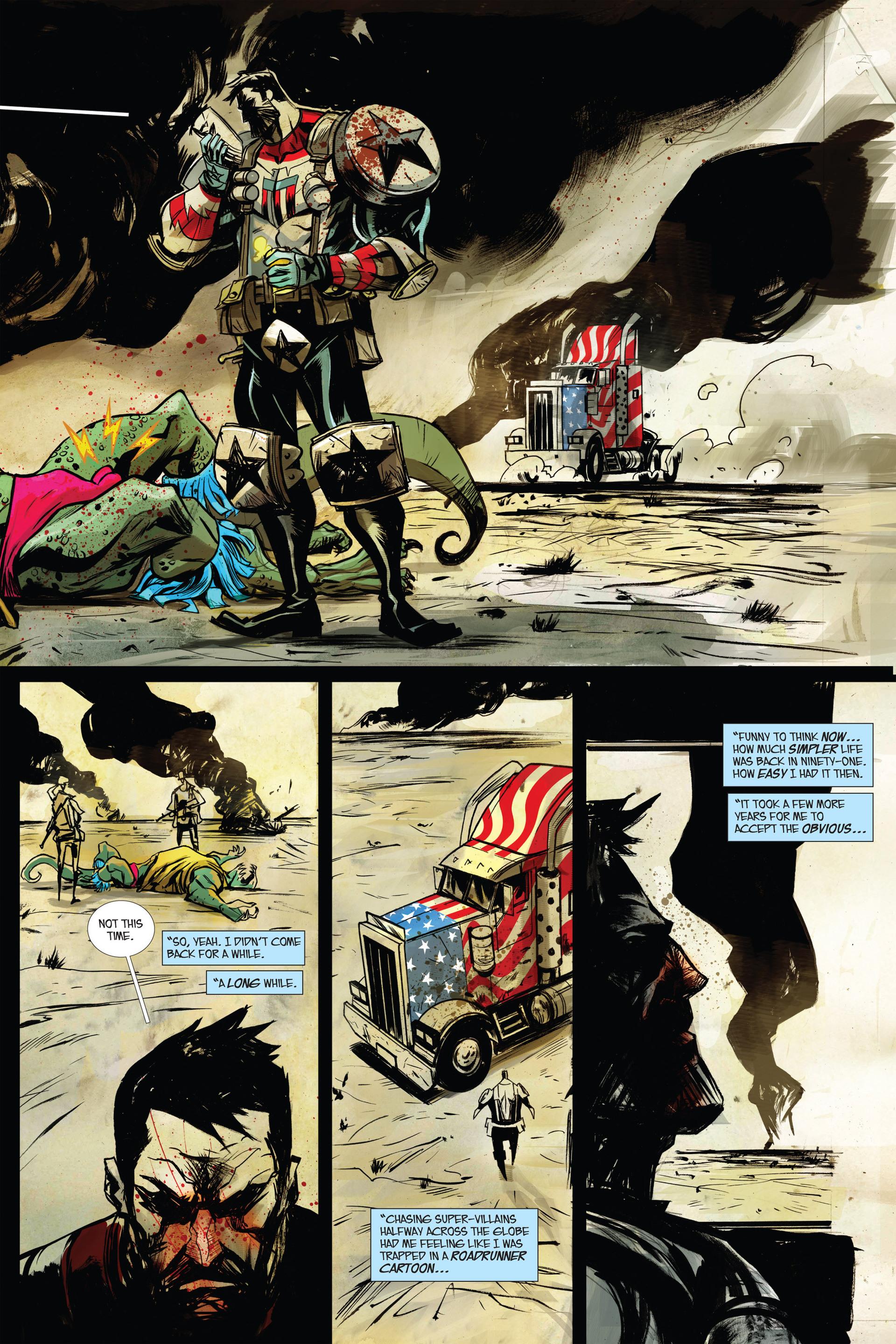 Back in the day Butcher Baker was the pre-eminent superhero, but he captured all his villains and has long retired to a life of hedonistic indulgence when Dick Cheney and Jay Leno come calling, representing the US government. It seems the taxpayers have tired of the assorted villains enjoying life at their expense, and Butcher Baker is bribed out of retirement to deal with the situation. His simplistic solution is to blow up the jail in which the villains are all housed, and most survive, find out what happened easily enough, and they want his head on a platter.

We’re very much in Howard Chaykin territory with a couldn’t give a toss hero who indulges himself to the limit with little concern for the morals of others. That’s as far as the similarity extends. Whereas Chaykin’s characters have a sardonic wit, Butcher Baker has a potty mouth. If Joe Casey’s taken his mood from Chaykin, his lead character is derived from another master, as Butcher Baker may tool around in a massive great truck, but in pretty well every other respect he’s the Comedian from Watchmen. There’s a meta aspect to Butcher Baker, as indicated by the cover to hardback edition being designed as if covering a school book. The presumed intent is that we’re supposed to take Butcher Baker as the ramblings of a high school student, the comics he’s created after reading Chaykin and Moore. Does this conceit validate the numerous plot holes in the opening chapter that generate the entire project? Not in the slightest, although it may explain why Butcher Baker ends up glorifying the gung-ho masculinity it’s supposed to be satirising.

That truck provides Mike Huddleston with something he can draw the hell out of, and the memorable aspects of Butcher Baker are entirely visual. He provides cartoon style mayhem, feeding into Casey’s idea that this is a project created by a kid using whatever tools at his disposal, and the results are weirdly effective. Some panels are coloured, some in black and white, others looking as if they’re in coloured biro. Proportions are sometimes random, nudity and violence coupled, blood spurts out all over the place, and the faded red, white and blue of the colour pages send their own message. Some pages are abstract and trippy, others like 1980s Bill Sienkiewicz straining to suppress his wilder tendencies and tell a story, others again have military men that might have been designed by Gerald Scarfe. Of course, a lot of thought has been applied to creating this mish-mash and it raises the entire tone immensely.

A wild card is introduced, a villain who’s attained some degree of enlightenment while jailed, and who may prove the only person able to deal with the mayhem Butcher Baker has generated. It’s the most interesting aspect of the strip, a genuinely questioning presence at odds with the contrived nihilism of the remainder.

Perhaps Casey didn’t write Butcher Baker as his inner fifteen year old. Maybe he genuinely thinks this is cool and groundbreaking. There are thirty pages of Casey explaining himself in the back, and if you can be bothered to read them you may find out. It’s followed by a short strip Casey and Huddleston produced for an anthology that appears to be a far more personal and effective distillation of the rage that informs the lead feature.