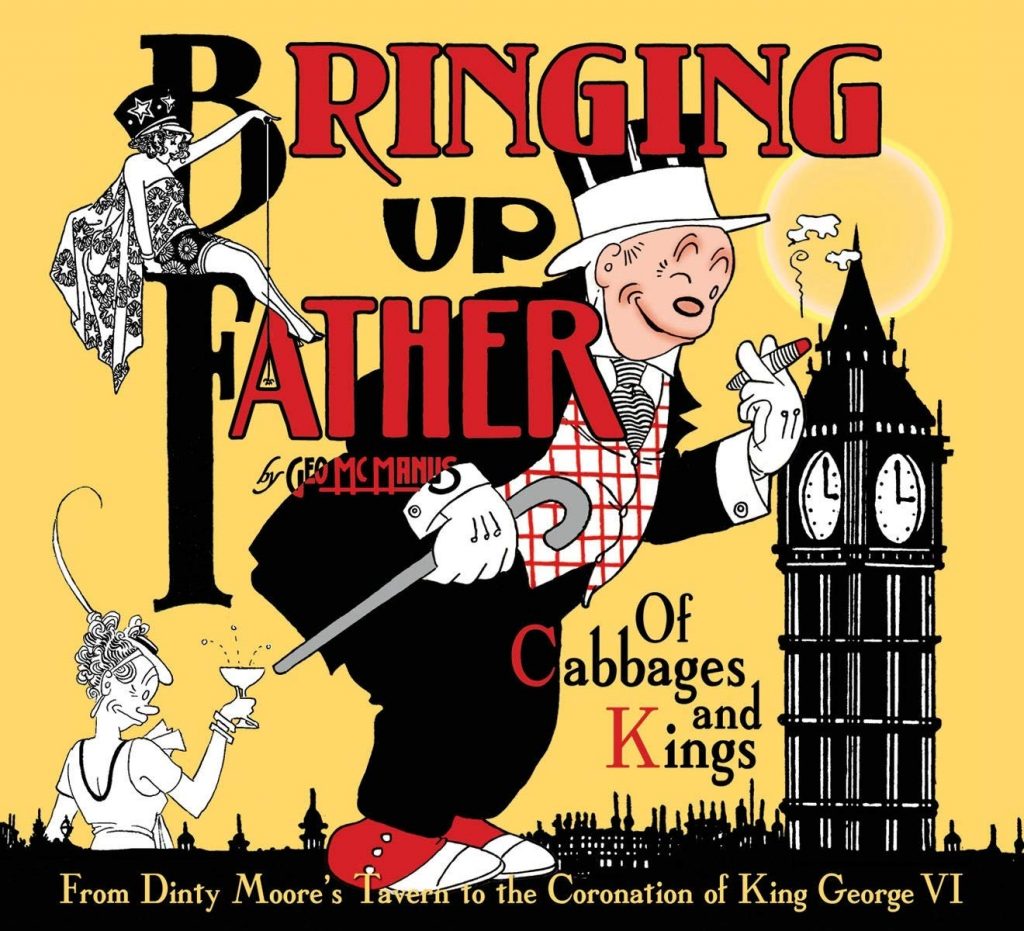 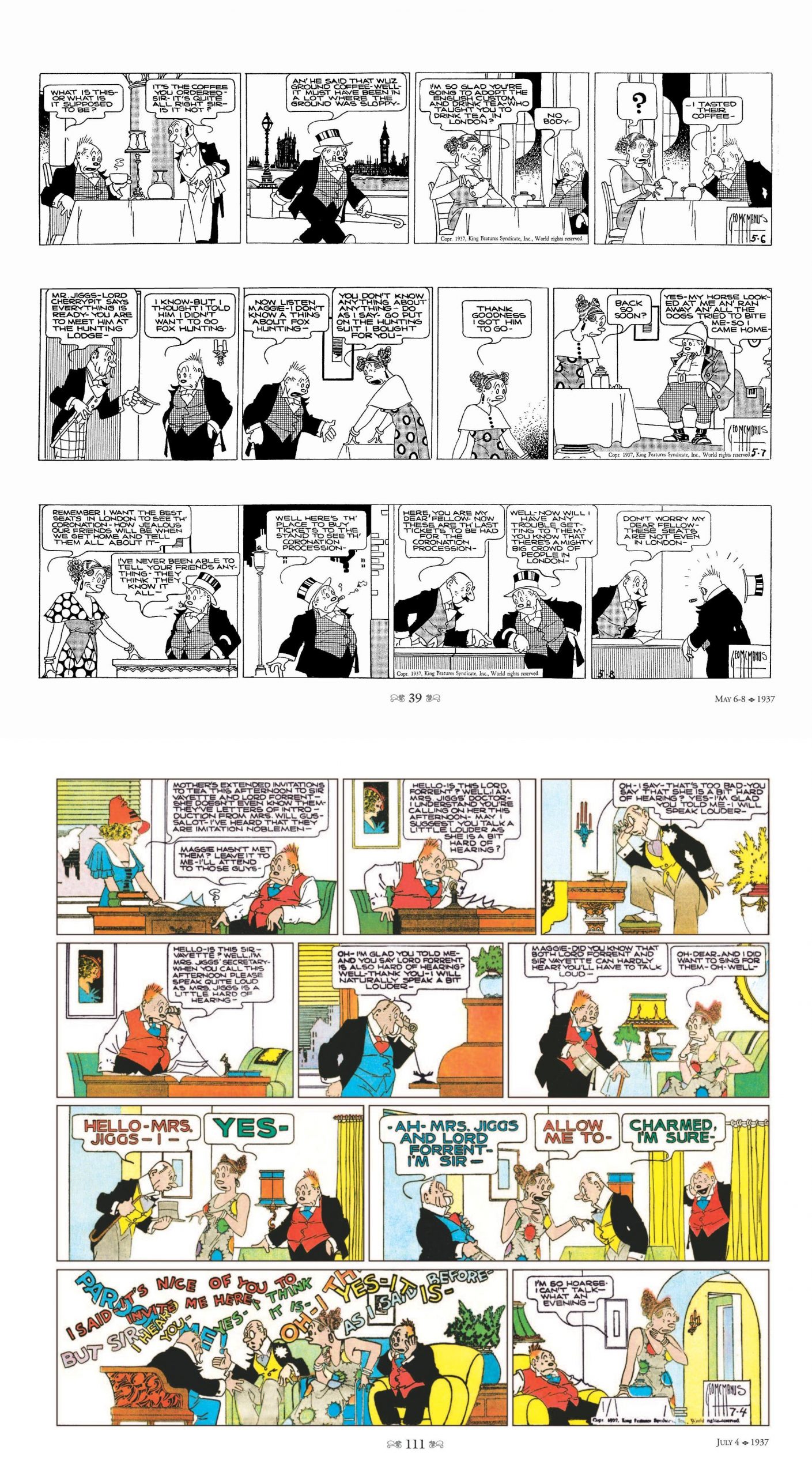 The cleverly titled Of Cabbages and Kings presents Bringing Up Father’s newspaper continuity from March 1937 until the end of 1938. The earliest sequence is Jiggs, Maggie and daughter Nora heading to England for the coronation of King George VI, father of Elizabeth II. Jiggs isn’t keen, lasting an entire month of strips before the inevitable capitulation, while almost another month is spent on the ship to London. At the core of the strip, Jiggs hates pomp and ceremony while Maggie revels in high society, so clashing aspirations provide the humour.

A separate continuity occupies the colour Sunday strips, and while the dailies pick up in early March, it’s mid-June when the Sundays catch up with Jiggs and Maggie returned from Britain, and they’re the first supplied. While mildly disappointing, it focuses greater attention on the black and white dailies. The continuity from May 6th to 8th 1937 is provided as the top sample art, gloriously drawn with an enviable delicacy. In addition to George McManus never presenting Maggie twice in the same outfit, smaller details catch the eye: the expressions, the decorative lamp, the backgrounds sometimes just a single object, but always with an ornate flourish, and the customary shine of light reflecting from Jiggs’ polished hat. Background elements may be assistant Zeke Zekley’s contribution. Many jokes are rimshot specials, but creatively constructed, and one about British coffee remained valid fifty years later. Combining hundreds of strips lays bare how McManus lands on a theme, produces every worthwhile joke that occurs, then moves on. The idle son gives way to the lost dog, followed by the eccentric butler… When McManus departs from formula in late 1937 to run random gags, all too many fall back on subjects unseemly today, such as Jiggs hiding the rolling pins, comments on Maggie’s age and appearance, and her dictatorial tendencies. In 1938 he institutes a move back to the old neighbourhood as Jiggs loses his fortune, a problem comically and ingeniously resolved when the jokes have been mined.

The colour strips look sumptuous. A hallmark of IDW’s Library of American Comics line is the superlative production, and the late Dale Crain’s diligent restoration leaves clear linework and bright colour allowing a renewed appreciation for McManus’ talent. The art speaks for itself, but the writing is the surprise. When not linked by a theme, McManus produces beautifully paced and often pithy ten to twelve panel comedy dramas, many prompted by Maggie’s snobbery and sense of self-importance. Stylistic fallbacks are revealed by combining 18 months of Sunday pages, but nearly all popular comedy relies on the repetition of characters never learning from their mistakes. A beautifully composed gag about social hypocrisy before and after a dinner party is a superior example of the general tone, as is Jiggs getting his finger stuck in a bowling ball when he’s supposed to be at the opera. Sometimes McManus really surprises. He plays with form as Sir Von Platter’s forgetfulness is whimsically transferred to the short strip McManus ran above his Sunday Bringing Up Father feature.

Beyond Jiggs’ family, Von Platter is the nearest to a supporting character, his amiable amnesia seen in both the daily and Sunday continuity, but his jokes eventually repetitive and obvious. It’s a rare lapse in what’s otherwise a beautifully constructed strip, dated in some respects, but the art sumptuous. A production error results in three January 1938 strips being repeated on the same days in February, but three missing strips are really neither here nor there. Anyone wanting to follow Bringing Up Father’s continuity is directed to companion volume From Sea to Shining Sea, which covers 1939 and 1940.