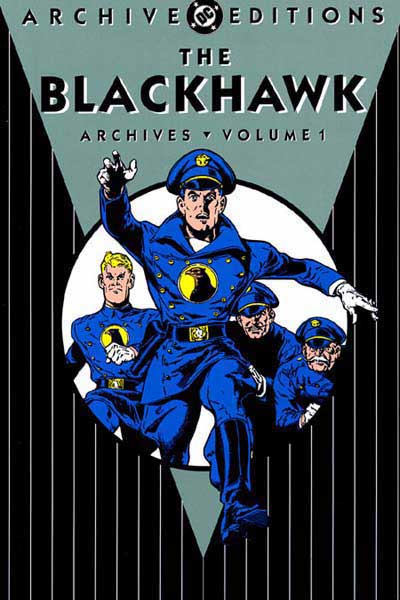 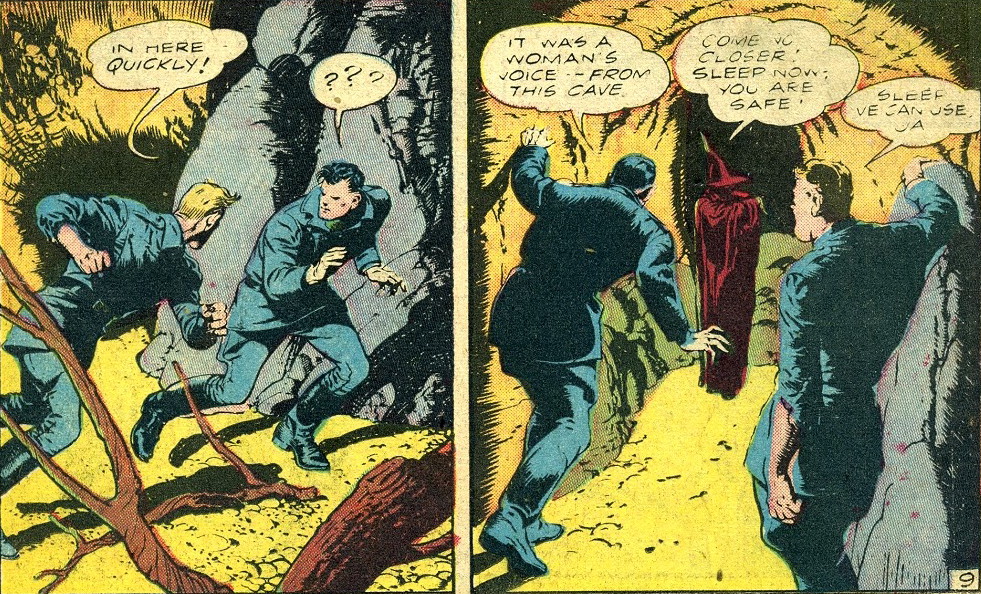 The earliest days of American comics were awash with talent and opportunity. Those factors gelled with a vast population hungry for cheap entertainment. There were no collectors; just a vast marketplace open to every aspect of yarn-spinning. Thus, even though loudly isolationist and more than six months away from joining World War II, creator Will Eisner and publisher Everett M. “Busy” Arnold felt Americans were ready for Military Comics.

Nobody was ready for Blackhawk.

The original Dark Knight debuted in May 1941, leading a ‘Foreign Legion of the Air’ against Nazi oppression and other militaristic menaces. Chuck Cuidera drew ‘The Origin of Blackhawk’, wherein a lone pilot defending Poland in September 1939 was shot down by Nazi Ace Von Tepp, who went on to bomb a farmhouse sheltering the pilot’s family. Rising from his plane’s wreckage the defeated survivor vowed vengeance.

Two years later, with the Nazis controlling Europe, Von Tepp’s unassailable position was ended by a mysterious paramilitary squadron of unbeatable fliers, dedicated to obliterating injustice and smashing the Axis.

Eisner wrote the first four episodes and Cuidera stayed aboard until issue 11. He would return in later years but as his replacement was the astounding Reed Crandall he was not missed. The two-fisted yarns grew ever more epic as “the last free men of the conquered countries” starred in an electric mix of patriotism and peril, controversially, by today’s standards, augmented by slapstick comedy chinaman Chop-Chop: painful to see through modern eyes, but a stock type considered as mandatory as a heroic leading man in those dark days, and not just in comics. At least this foil was a brave and formidable fighter both on the ground and in a plane.

‘Desert Death’ took the team to Suez for the first of many memorable Arabian escapades and is notable for introducing a prototype sinister, sexy siren that would decorate the strip until DC acquired the property. There was also a secret map of Blackhawk Island, clandestine base of the fabulous freedom fighters.

Dick French assumed the writing from the fifth story, later replaced by Bill Woolfolk. French provided distinct characterisations for the previously anonymous supporting wingmen, and successive tales see them tackle everything from Gestapo germ weapons to ‘The Return of Genghis Khan’.

‘The Sunken Island of Death’ is a particularly striking maritime exploit wherein the warring powers battle to possess an island freshly risen from the Atlantic, strategically equidistant between America, Britain and Nazi-occupied Europe. Complete in itself, it was another prototype: an experimental, three-part saga which stretched the way comic stories were told.

Perhaps the oddest idiosyncrasy for modern readers is that Blackhawks André, Chuck, Stanislaus, Olaf, Hendrickson and Chop-Chop sang as they hurtled into battle. The music and lyrics are included here, but remember this is written for seven really tough guys in leather to sing while dodging bullets and ack-ack.

The series kicked into top gear after Pearl Harbor and America’s actual entry into the war. From Britain to Borneo, the Azores to Arabia, the Blackhawks offered unparalleled excitement: stories produced at a pivotal moment in comics and world history; blending weary sophistication with glorious, juvenile bravado and, like the movies of the time with their understated, overblown way of accepting duty and loss, revealed the miracles good men can accomplish. As such these are arguably some of the very best comics of their time.