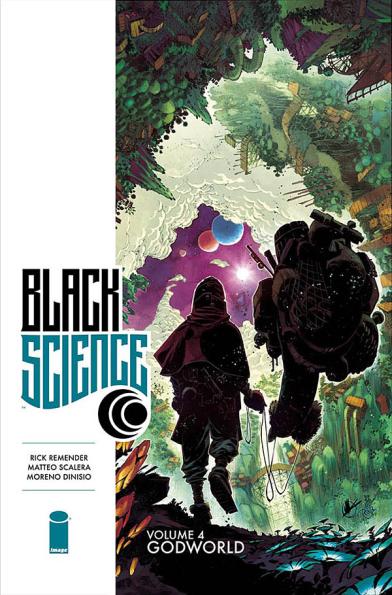 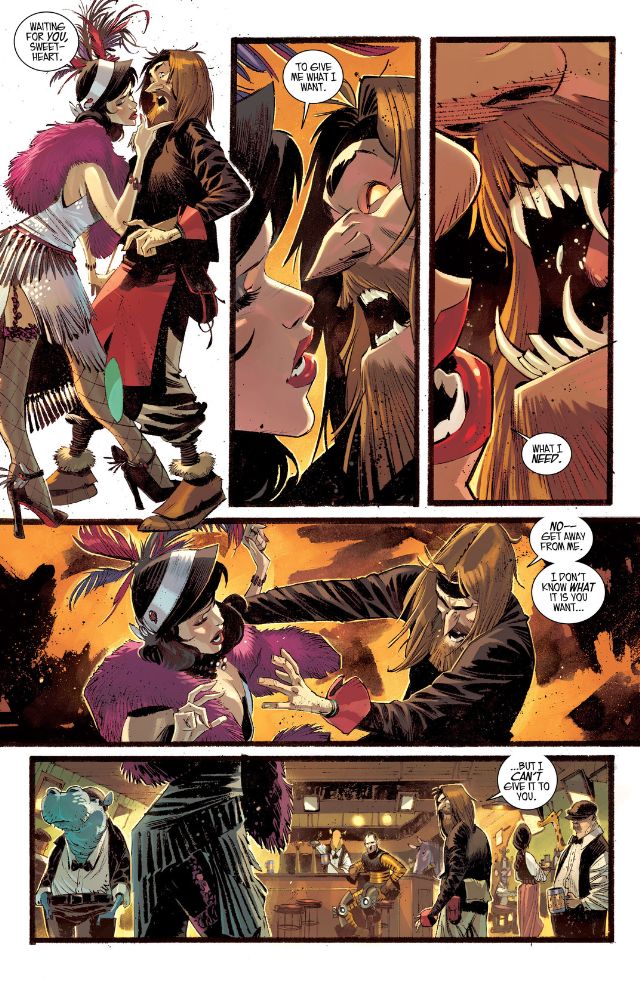 When William Goldman was hired by Michael Douglas to write the screenplay for The Ghost and the Darkness, Goldman cautioned Douglas not to tell the old hunter’s backstory, it would completely dispel the whole mystery of the character. Douglas the producer listened, but Douglas the actor, who played the old hunter, didn’t. Goldman wrote the backstory, dispelling all the mystery of the character and, ultimately, the film itself.

In Godworld, volume 4 of Rick Remender and Matteo Scalera’s runaway freight train of a series, Black Science, the wheels all but come off the track as the creators make a three-chapter detour to delineate Grant’s backstory. Up until this near debacle, Remender and Scalera had expertly employed flashbacks to provide moments of dramatic insight and revelations into their character’s motivations and makeup. The trouble with delving into a full backstory is that it really isn’t telling us anything new that significantly changes our view of the character.

In the case of Grant McKay, Remender had skillfully portrayed his character flaws through action and dialogue in the present. The guy is an asshole and a screw up, but he’s been fighting very hard to change. Going into his past to give us the exact moment he became an asshole and screw up is both tedious and counter-productive. Worse still, it’s all a tad predictable. We all have reasons for the stupid things we do, is it necessary to sit our friends down to give them the full story of our lives in gory detail? How quickly do you think it will take before they’re reaching for the remote? In Othello, the bard turns convention on its head by refusing to give Iago a reason for his villainy. Guess what? That just makes him all the more interesting! Sometimes, as Goldman said, you need to preserve a little mystery.

The backstory is set apart by the absence of the title page, signaling a welcome return to the story proper when it returns. It’s a welcome relief and a real shame in that the ‘origin’ is quickly (and thankfully) forgotten as Grant’s focus turns back from his demons to his mission. It’s a quick reboot to a shocker of an ending.

And here the reader may pause to shake their head. The concluding chapter simply stuns! It descends like a hammer blow straight from the pen of Rod Serling. It’s above and beyond the best, the most powerful installment of the series and may be one of the best single issues of Remender’s career.

As it is, you could probably the others and not miss a beat. Having said that, let’s give the creators the benefit of the doubt in that certain elements raised in those issues may return at a later time to influence the story (but hopefully not!). They just don’t influence anything that has happened up to this point. Certainly, the finale swoops in, like Superman, to save the day. That and that alone typifies what Black Science has been and, hopefully, will continue to be again, moving forward from Godworld.