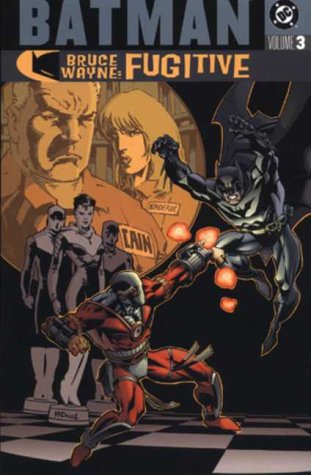 The rushed final chapter of Bruce Wayne, Fugitive volume two revealed who was responsible for the murder of which Bruce Wayne was accused, and the likely person pulling the strings. Tied into the DC continuity of the time, the effect is now diminished, but this aftermath volume is actually the best of the series overall.

It opens with a focus on Sasha Bordeaux, employed as a bodyguard for Wayne at the insistence of his corporate board, and astute enough to deduce his other identity. Implicated in the murder of Vesper Fairchild, she was found guilty, and jailed. Greg Rucka introduced her character, and over three fine chapters here redefines her. While she’s been in jail she’s never betrayed her secrets, yet there’s a level of resentment at her predicament.

Steve Lieber supplies his refined storytelling for two chapters, with the story completed by Rick Burchett. Rucka drops a complete bombshell, and introduces the machinations of covert agency Checkmate leading to an astutely characterised heart to heart. It provides a revision of earlier events (not included here, but referenced adequately), which conclude a fine character piece. It may be less satisfying for those wanting to see Batman in action, but there’s enough of that in the following content.

With Wayne now able to appear in public again Devin Grayson and Roger Robinson produce a rather clever story following him over a 24 hour period. Grayson’s scripting delivers what might be boring office material with some sparkle, before the pair cut loose with Batman after dark.

Ed Brubaker and Geoff Johns collaborate on the finale to what’s been a vastly bloated story, with Scott McDaniel illustrating in cartoon style. There’s going to be a trial, and Batman suspects there are vested interests who’ll want to ensure the defendant never manages to testify. The mystery is not who’s been hired, as Deadshot is revealed early, but when he’ll strike. Those who may feel this collection requires a slam-bang action extravaganza get it here.

The book closes with a Batgirl story focussing on a character central to the entire Fugitive saga. It’s a slight, but emotionally effective piece from Kelley Puckett and Damion Scott.

Overall, Bruce Wayne, Fugitive was bloated and meandering, but as a collection of stories this selection stands up well if you don’t care about the nuts and bolts of the over-riding plot. All of this content made the remastered single volume of Fugitive.