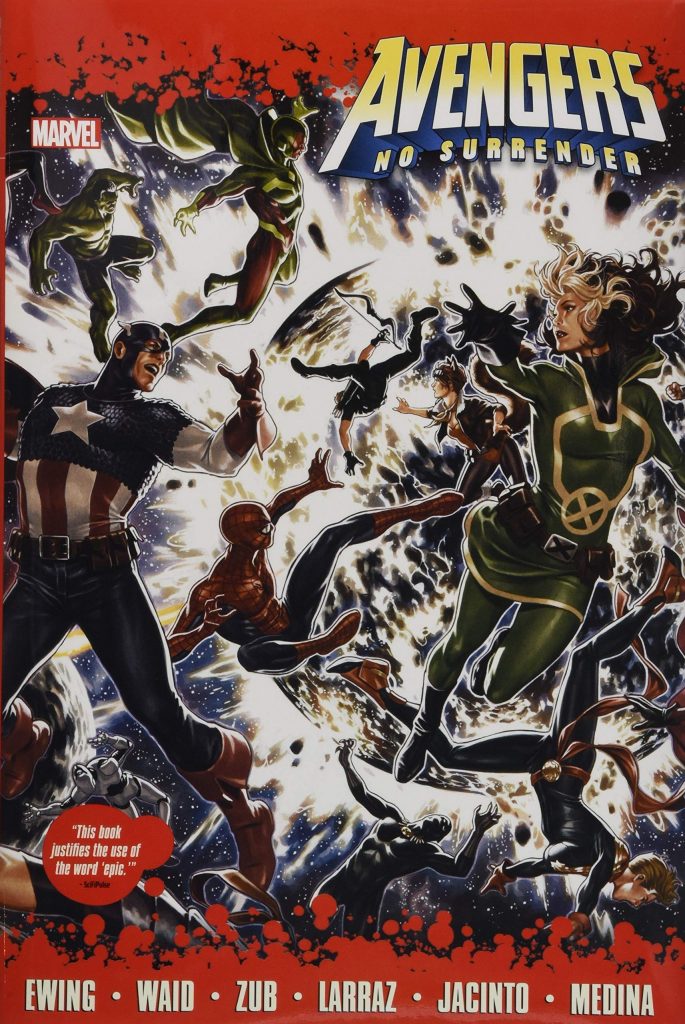 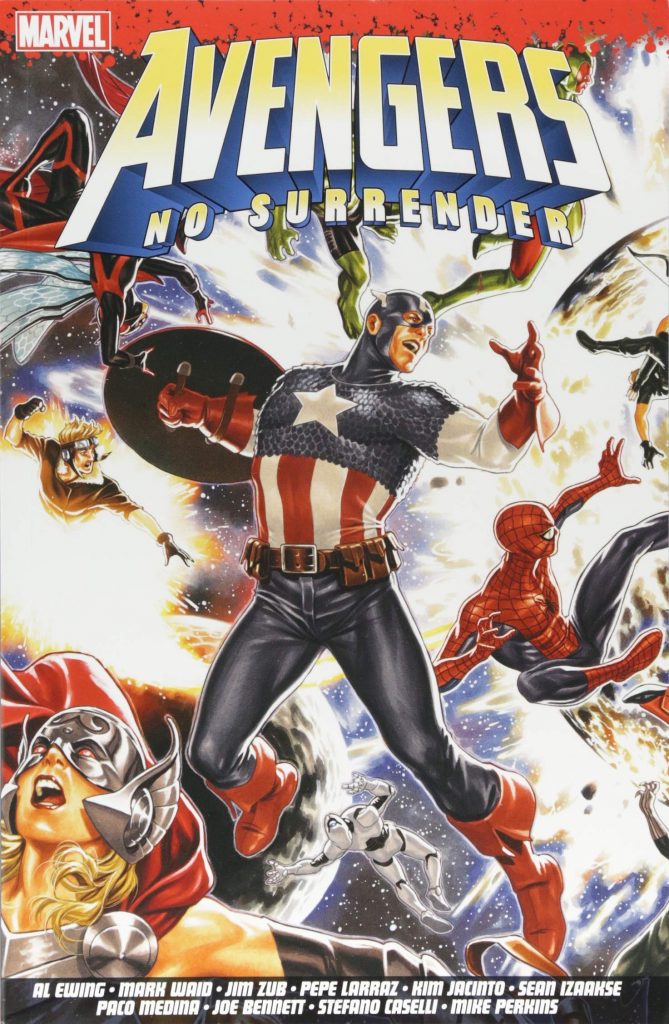 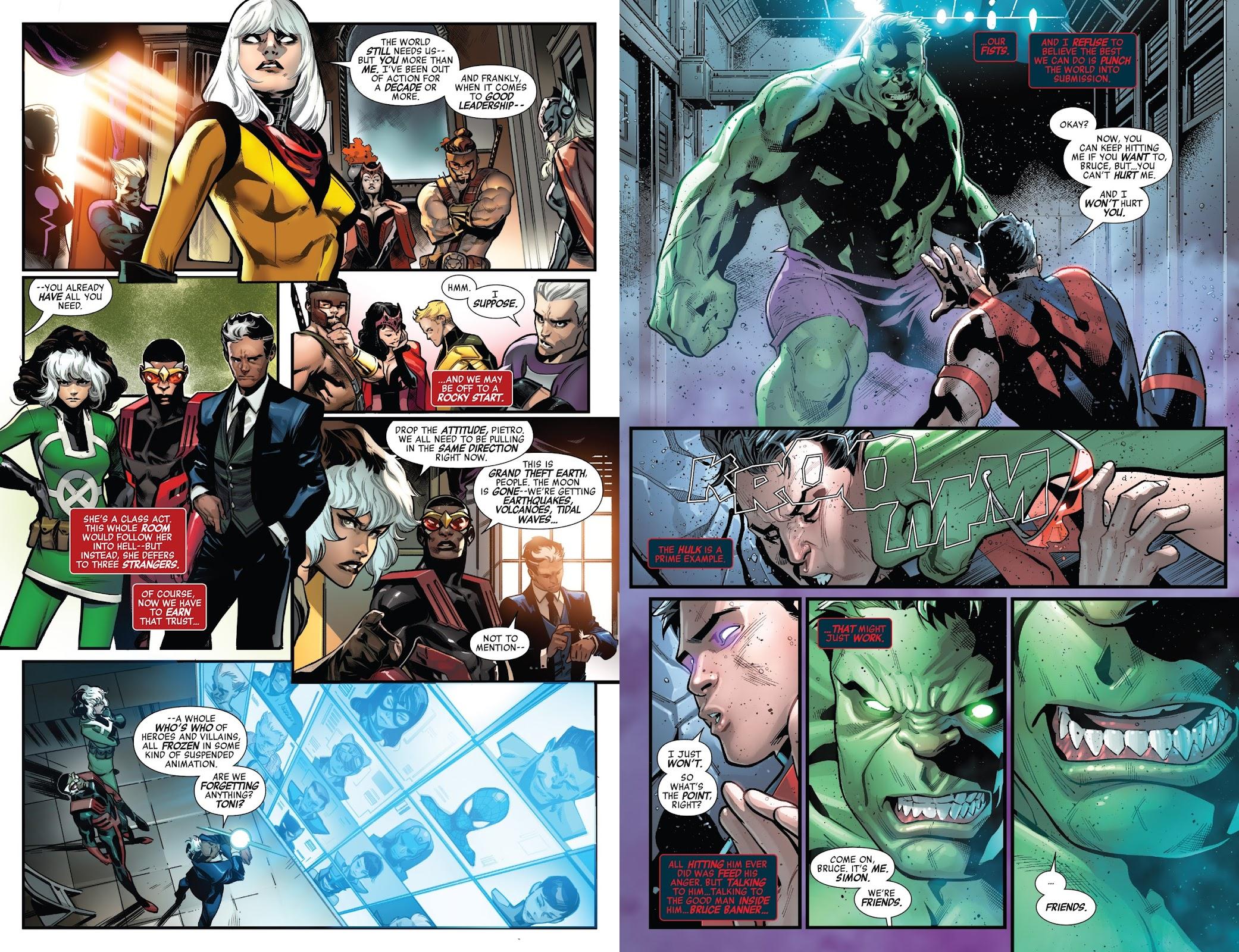 No Surrender is a bulky Avengers collection that begins with long-forgotten Avenger Miguel Santos, once Living Lightning, now just Lightning. Pleasingly, his presence is more than just another brief cameo and he plays a pivotal role in a tale that frequently surprises, if not always living up to potential. The opening chapter reminds just how many Avengers there have been over the years. However, there’s one you may have forgotten: Voyager. No? One of the founding Avengers who stuck around when the others left? Hmm, well that’s a mystery then.

Voyager returns just as Earth is removed from orbit, a whole host of major heroes fall into suspended animation, and two groups of alien villains arrive to battle each other. Al Ewing, Mark Waid and Jim Zub share the writing, and restricting the participation to secondary Avengers, and the seeming continuity implant of Voyager are interesting. Unfortunately, though, there’s a rapid descent into a largely plot-free zone as three teams skirmish across the world. This might read better if the art were presented more dynamically than the pages supplied by a number of artists over the first half, but primarily Pepe Larraz. A willingness to pack characters into those pages can’t be faulted, but there’s no great focus.

While the battles go on the writers clarify that it’s a contest organised by cosmic elder the Grandmaster, who loves a game using superhero pawns. He’s been challenged by the Challenger, which is too obvious. The writers use the carnage to distract, preventing readers from thinking too much about Voyager, and it’s not until halfway that her mystery is addressed. Once it’s raised, the truth about her is quickly revealed, and the rapidity of that is a disappointment, because with the mystery gone there’s not as much to sustain No Surrender. At the time that was handled by the surprise return of the Hulk, but that surprise has long passed.

On the other hand, although Larraz returns for the finale, much of the second half is drawn by Paco Medina, who’s far more imaginative. The characters are no longer falling on top of each other, and even while using the Hulk almost bursting the panel borders the people in them have space to breathe.

Two endings run parallel in the penultimate chapter, one interesting and small, the other the blowout battle, intended to be a stirring last ditch stand reinforcing the mythology of the Avengers, but which is overblown and unconvincing. Heroism beyond the call of duty is what’s meant to embed, but flip the coin and it suggests not enough collective effort beforehand. Pleasingly, the epilogue chapter also looks in on the villains.

It’s a nice idea to use an entire platoon of Avengers whose turn in the spotlight is usually limited, but ensuring the spotlight shines on them all, in most cases only briefly, means prolonging No Surrender well beyond the lifespan the plot requires. Too much of the first half is repetitive, while the second might not be satisfying in every respect, but at least varies the scenarios.

If No Surrender does appeal, the same writers provide a form of sequel with Avengers: No Road Home. It’s a lot shorter and it’s a lot better. 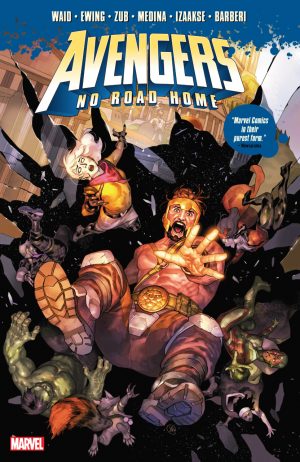 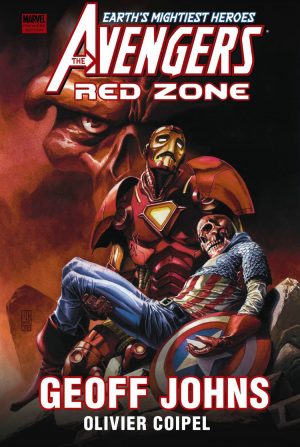 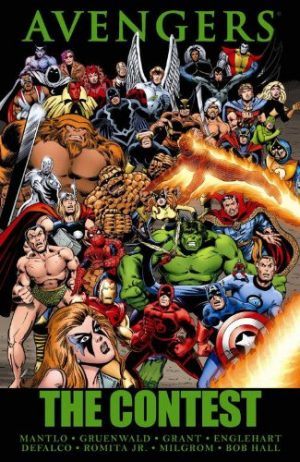