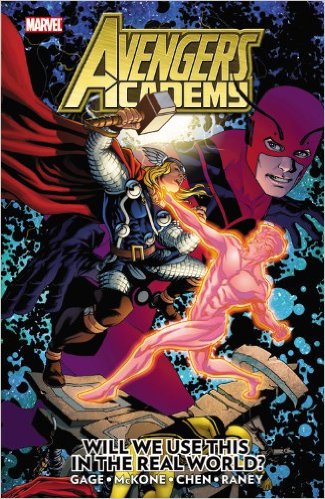 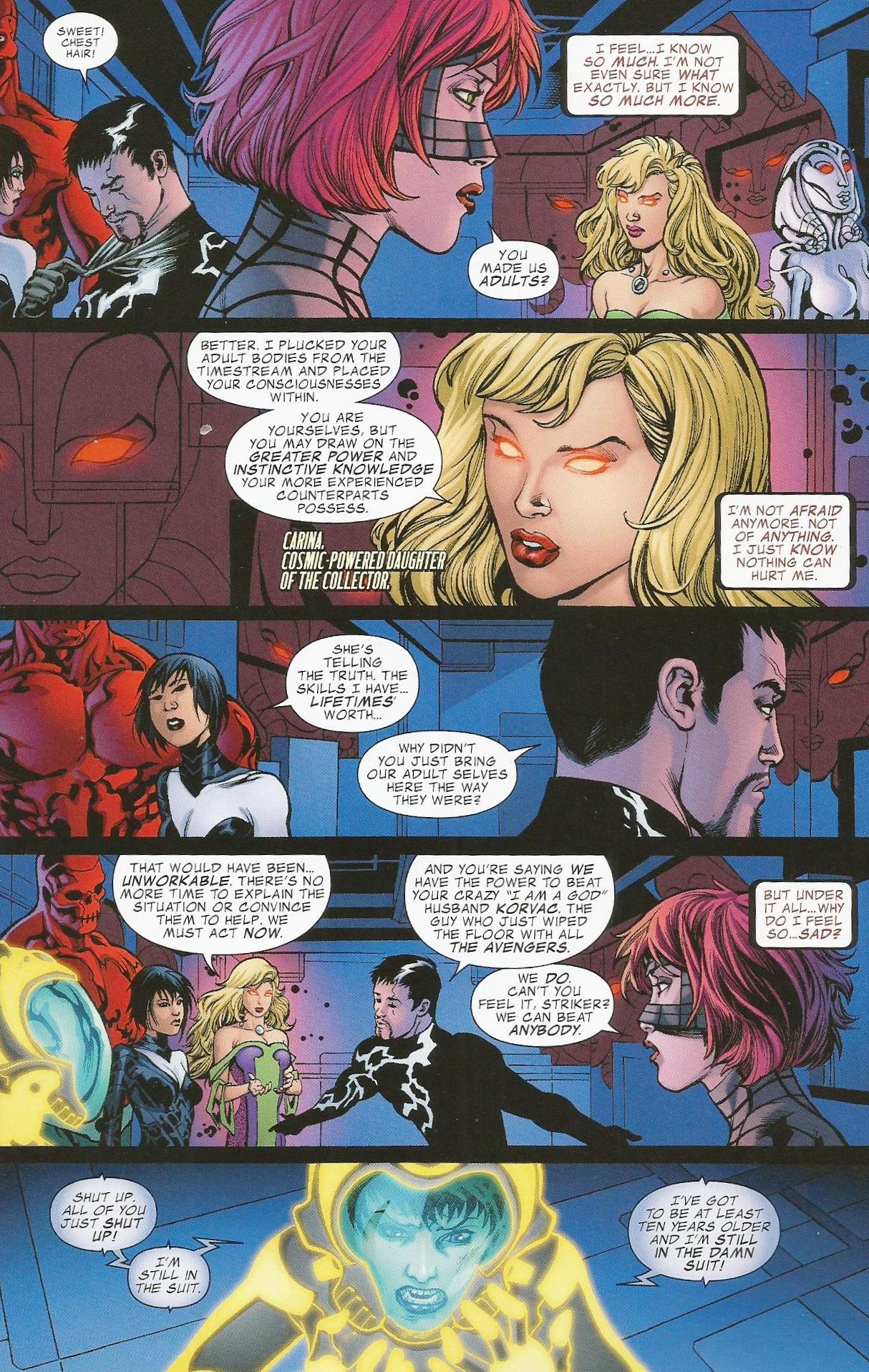 After the blip caused by Arcade: Death Game, this resumes the story of our fledgling heroes’ rapid education. An extracurricular activity undertaken by Veil, Hazmat and Striker – a ‘revenge beatdown’ vid of the Hood, who previously publicly humiliated one of the kids’ teachers, Tigra – backfires on them. Tigra expels them, on the grounds that their actions in beating and belittling the powerless Hood, rather than arresting him, were the methods of the villains which the Academy is trying to prevent our freshman class from becoming.

Tigra faces another challenge in re-establishing the boundaries of her relationship with fellow-teacher Hank Pym – former lovers during their West Coast Avengers days, their relationship rekindled during their shared time in the Initiative – or at least, Tigra thought it had. Trouble was, the ‘Hank’ in question was a Skrull, who duplicated Hank’s DNA on a molecular level, so that the child Tigra had via Skrull-Hank is, genetically, Henry Pym’s son. Custodial arrangements promise to be… challenging.

Otherwise, Hank’s fine – apart from his currently-dead wife, the Wasp, being the cybernetic template for the Infinite Mansion in which Avengers Academy is based. But it’s okay, as Hank, originally a specialist in insects, plans to use Janet’s brainwaves to bring her back to life, due to the wonder of Comic Book Science.

The drama isn’t all on the olds’ side, mind – Finesse meets her possible father, who warns her that her ‘photographic reflexes’ require vast memory space – and that, as the years progress and she acquires more knowledge, those memories may overwrite every vestige of her own persona. And after  the errant students are reinstated, the well-intentioned Veil, tired of being the poster girl for disastrous misunderstandings, tries to make amends by prematurely triggering Hank’s ‘Bring Jan Back from the Dead’ plan.

Big oops, as the entity Hank thought was Jan was actually Carina, daughter of the Collector and bride of Korvac, nigh-omnipotent who wiped the floor with the Avenger’s mightiest several years ago. Korvac now gets to do it all over again when he comes looking for his estranged missus! Carina, it transpires, has fled an oppressive union, and in defending her right to autonomy, the faculty, augmented by an all-star roster of Avengers, get their arses kicked in a very few minutes by Korvac’s seemingly limitless power.

Using her own power, Carina ’embiggens’ the students, giving them the bodies, knowledge and skills of their adult future selves, enabling them to save the day – but after the crisis, one student seems curiously reluctant to go back to their natural age…

A pleasing coda is an engaging ‘prom’ where teachers and students unwind. Among the invited guests are several alumni from the Initiative we haven’t seen in a while. Old relationships are clarified – Justice and his former fiancee, Firestar,  getting some long-overdue closure – and some new ones ignited. Hank scores with Tigra, while his robotic lover Jocasta is right there in the mansion, and he’s still planning to retrieve his dead wife – grife, the man’s almost as undecided romantically as he is about his superheroic identity!

Variant covers fill out the book. Amanda Conner’s, needless to say, takes the win, despite having nothing to do with the actual series, and the next paperback is Avengers Academy: Fear Itself.