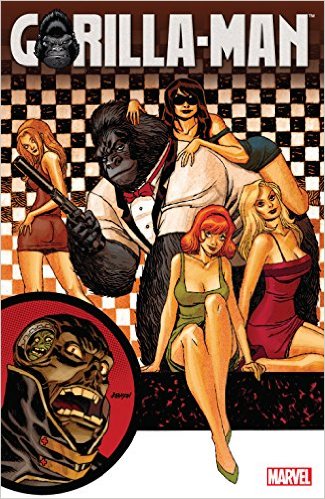 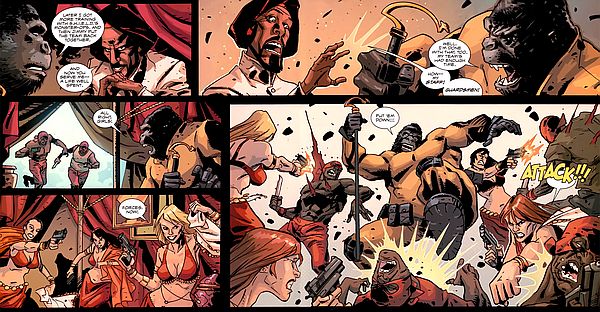 Gorilla Man is one of those characters whose name says it all: he was a man, now a gorilla, in this case because of a magical curse, which on the other hand granted him immortality. Created in 1954, Ken Hale (his real name) appeared here and there in the following decades, only to become a main character in Jeff Parker and Leonard Kirk’s Agents of Atlas.

This volume includes a new three chapter story, plus various reprints. The new story works far better than the previous solo Agents story, maybe because this time, Parker switches back and forth between the past the present, fleshing Gorilla Man out and giving this story some importance.

It begins with Hale fighting a leftover from the Atlas Foundation’s days as a criminal organisation, here the cybernised descendant of the Borgian family. Back home, Hale decides which menace he should bust next and zeroes in on a turban-wearing guy. Off he goes to Congo, meeting Ji Banda, a local man loyal to the current Atlas regime. Together, they search for the turbaned man who, in true Agents of Atlas convention, has links to Hale’s early life. Hale himself tells Banda about his pre-simian days, a simple but effective way to connect past and present: An orphaned child during the Great Depression, the future Gorilla Man found a protector who took him under his wing. He grew up as a muscled handyman to the business man, having many adventures on the way.

Both the main narrative (a jungle chase leading to a magical doohickey) and the remembered fisticuffs are drawn by Giancarlo Caracuzzo, who has a very solid, illustrative style appropriate for all settings of the various sequences. He’s in fact more in an European tradition of adventure comics than in the American superhero aesthetics. As good as other artists who worked on the main series are (and Gabriel Hardman or Leonard Kirk are very good), Caracuzzo’s style brings a welcome change and identity.

There are three reprints of short, pre-superhero stories about men turned into gorillas, drawn by Bob Powell and Jack Kirby in the 1950s and rarely seen since. These are a real treat for fans of 1950s weirdness. The other reprint is from a recent X-Men: First Class story (also written by Parker), where Hale meets the original X-Men in the jungle, a story referenced in an Agents of Atlas tale. Rounding up this book is a short back-up from another Agents issue, written by Jason Aaron and drawn by Caracuzzo, with present-day Hale confronting a guy who wants to steal his immortality. It’s a bitter reminder that Gorilla Man’s days are not only filled with high-octane adventures.

Though light and short reading, Gorilla Man is very entertaining, with a main character who displays more humanity than a lot of better-known superheroes. After all, a comic that boasts the head of Lucrecia Borgia, an immortality-gifting MacGuffin (think mystical Maltese Falcon), female assassins and a talking gorilla right in the middle of an African jungle – and let’s not forget the island with a ready-to-explode volcano and a mysterious idol – can’t help being a fun experience.

Seriousness would return with the final Agents of Atlas volume, Return of the Three-Dimensional Man.