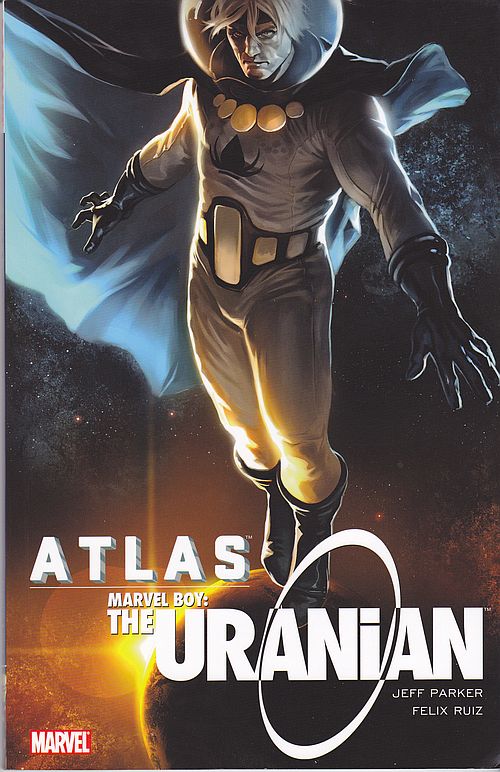 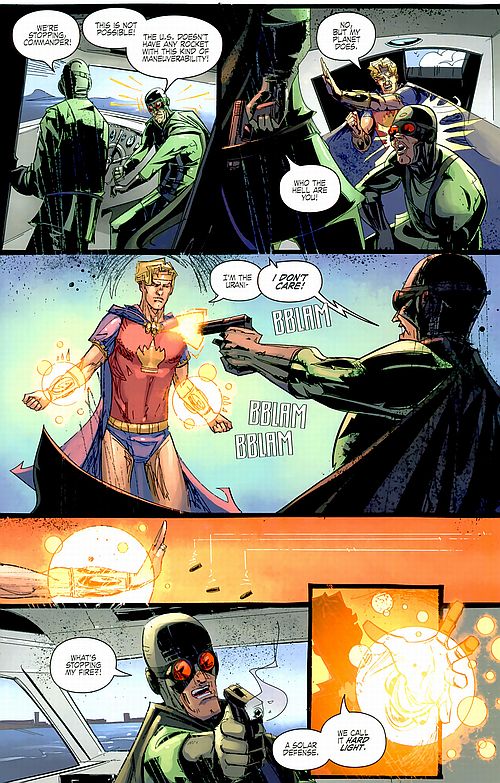 Marvel Boy is one of those 1950s characters periodically reinvented, usually in a (at best) secondary role. After a couple of appearances in the 1970s, he resurfaced in the 2006 series Agents of Atlas, this time under the guidance of writer Jeff Parker. This collection includes a new three part story set in the 1950s, plus reprints of 1950s stories and his 1975 two-issue appearance in Fantastic Four.

Brought as a boy in the 1930s to a secret society living on Uranus by his father, a Jewish scientist fearing the rise of Nazi Germany, Bob Grayson returns to Earth in 1950, gifted by the Uranians with a state-of-the-art rocket, wrist bands that control light, and telepathic abilities. The new story, written by Parker with art by newcomer Felix Ruiz, follows Grayson as he acclimates to Earth, and more precisely to the USA. Parker has a cute idea, making the short-lived 1950s series  starring Marvel Boy a comic published with Grayson’s agreement by Timely Comics, the real-world precursor to Marvel Comics. That’s more or less the only interesting thing happening, which adds nothing to the depiction of the character in the main Agents of Atlas series.

The art is far more attractive, since Ruiz’s style at the time was heavily influenced by the work of Bill Sienkiewicz. The dynamism of the layouts and the scratchy quality of the line bring much pleasure to the eye and hold the attention far more than the plot or the characters.

The reprints of the early 1950s adventures of the character are also a lot of fun to read. The stories are completely silly, and the art, by Russ Heath and Bill Everett, is largely above average, not only for a period often seen as a low point in American comics.

The volume ends with a story written by Roy Thomas with George Pérez art, during which a character claiming to be Marvel Boy wreaks havoc before being stopped by the Fantastic Four. It would later be retconned by Parker in the first Agents book. It’s also a nicely drawn tale, where Pérez’s work is finished by Joe Sinnott, an inker whose career spanned decades and various aesthetics, from Jack Kirby’s bombastic style to Pérez’s and others’ more modern (for the time) sensibility.

The reason why the new story in this volume doesn’t really work might be because it’s all set in the 1950s, contrary to most other Agents of Atlas stories, thus preventing any real character development. Fortunately, Jeff Parker wouldn’t make the same mistake in the next solo adventure of an Agent, Gorilla Man.

As a post scriptum, let’s finish this review with a mention of a third Agents solo story. Only a one-shot that time, Namora, the Atlantean powerhouse, was part of the Women of Marvel collection published in 2011. Her tale was written by Parker and drawn by Sara Pichelli, and showed Namora finding a lost Atlantean colony and coming to terms with the price of peace and tranquility. It was a pity two male Agents got a miniseries while a female Agent only received a one-shot.