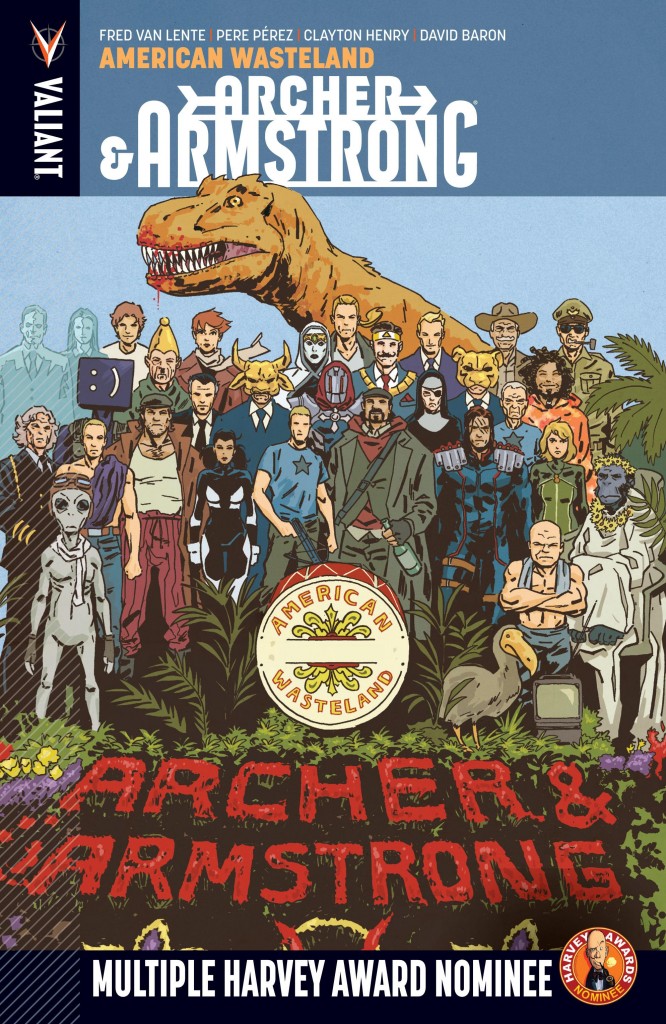 To date Archer & Armstrong has dealt with cults of various types, and Van Lente now sets his sights on modern era spiritual manipulation. Although his satirical variation is named Retrology, it closely resembles the processes of Scientology with some of David Icke’s lizard mythology mixed in along with long dead celebrities. Van Lente enjoys himself hugely creating the jargon-based justifications: “Retrologists actualize our idealised selves in the matter-based world by separating from the soul and mind-killing distractions of modern life”. Of course, with Armstrong he has a character who’s lived through the creation of all longstanding religious beliefs, never mind their latter-day imitators, and so is ideally suited to commentary.

Van Lente appears to cheat a little to open the book, whipping the rug away with the revelation that after the experience of Mission: Improbable, there’s actually very little information of relevance to Archer. He turns up in LA to meet his mother, and with that Van Lente pays off in spades. Those who’ve been paying attention will jump ahead to a revelation seeded in Far Faraway. There is a slight problem with American Wasteland, and it’s the presumption on Van Lente’s part that the audience is as well read and culturally aware as he is, which is a big ask when we’re dealing with the celebrities of the 1960s. How many people will know the weeping woman in pink, and the assassin who failed to kill her with three shots? Those who get the jokes will laugh along as usual, but there are no concessions.

Pere Pérez illustrates most of American Wasteland, and by the conclusion will have drawn more of this series than any other artist. He appears to have a little trouble with some celebrity likenesses, but as some are specifically not named that may also be a method of forestalling the lawyer’s letters. Otherwise he’s just fine, leaving enough space for the cast to breathe within the panels, having no fear of the full figure, and adapting to the assorted changes Van Lente’s script throws at him.

The scriptwriter’s craft is very much in evidence, and it’s difficult to restrain a gasp of admiration at what Van Lente achieves over the title piece. It’s audacious, ambitious and well carried out in concluding a story begun in the opening volume. A final chapter well illustrated by original series artist Clayton Henry ties the bow on a few loose ends in customarily satisfactory fashion. Can there be anything left to follow-up in The One Percent and Other Tales? Both are found in the oversized hardcover Archer & Armstrong Deluxe Edition 2.