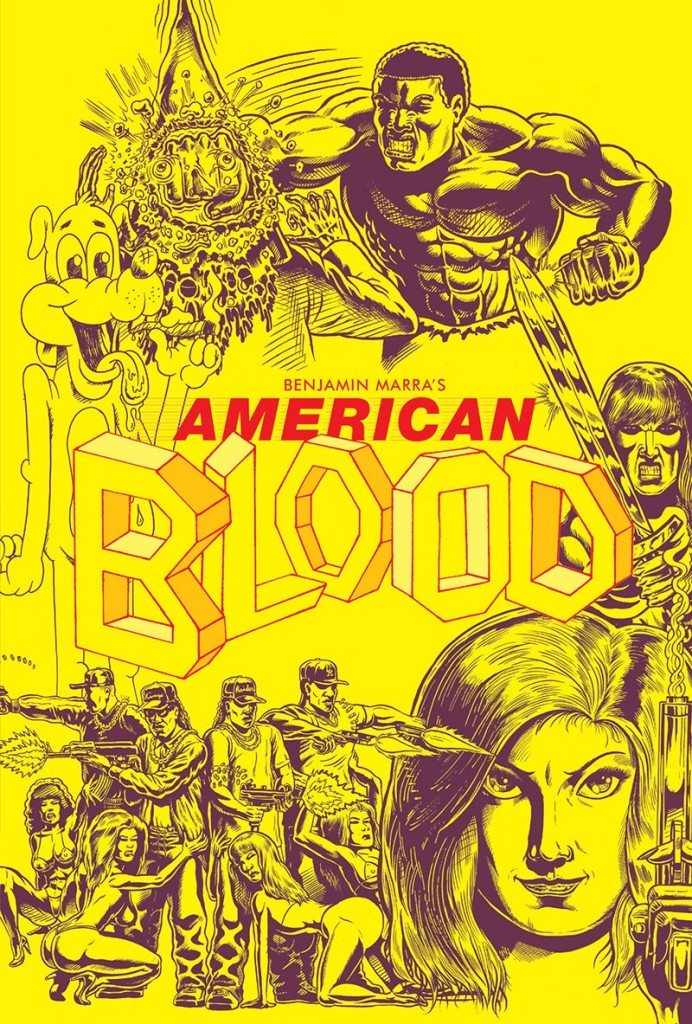 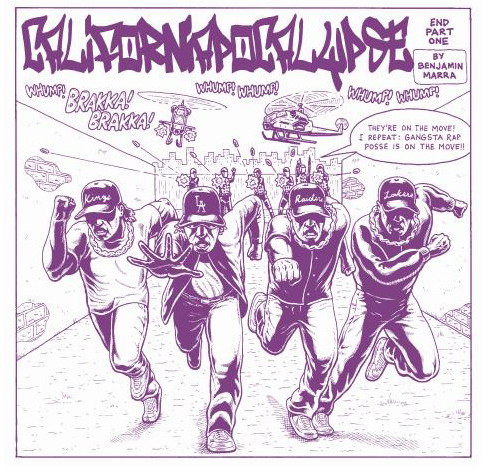 Benjamin Marra’s a unique creator in 21st century graphic novels, fusing the sensibilities of the 1960s underground comics with the spontaneity of the small press comic. We owe Fantagraphics a debt of thanks for following up their 2015 publication of Marra’s Terror Assaulter with this anthology of his previously self-published comics, which are a hilarious genre-mashing land of wonder.

Collectively they’re an astonishingly visceral selection of speed-fueled strips, channelling trashy cinematic and action comics influences. Lincoln Washington is a former slave, the very spirit of placid tolerance in the face of provocation, the loner eventually exacting a righteous vengeance we all know is coming. Impossibly glamorous political columnist Maureen Dowd dates George Clooney and is determined to dig up the dirt at the core of the Bush administration. Ripper is the canine equivalent of Fritz the Cat presented as if a kids TV animation. Zorion the Swordlord speaks for himself and the Naked Heroes are a rock band stranded in a science-fiction dimension. Alternatively, it’s a mad edition of the early 2000AD.

The opening strip, Marra’s first self-published work, best exemplifies his cultural sponge attitude. The Gangsta Rap Posse are the brutal excesses of 1990s gangster rap lyrics transposed to an actual code of life, shooting up their rivals, pimping any acquired women and invading neo-Nazi gigs. It’s not a lifestyle lacking enemies. The mayor is determined to deal with them after they abducted his wife, subjected her to a gang bang and then marketed a DVD of the assault. Funk legend Harold Smithsonian wants some restitution for a career built on sampling his music, and fellow musical legend Snoozy Koblins, imprisoned in full funk regalia, is offered his freedom in exchange for dealing with the Gangsta Rap Posse. Marra supplies a brilliant updating of 1970s Blaxploitation movies first time out, complete with spot on hip-hop lyrics. It’s what assorted Wayans brothers have been attempting to pull off for years, yet have never managed as succinctly.

At face value American Blood is an appalling catalogue of brutality, misogyny and racism, but surely no-one could fail to realise the broad streak of satire in what are frequently hilarious strips. There’s a punk rock aesthetic at play, with Marra prioritising speed. His strips start at full pelt and escalate from there, with almost all his characters in a desperate rush to reach the end of the strip, and if the illustrations aren’t always perfect they’re certainly mood defining. Feeding into the ethos, the art is presented in purple on off white paper, as if scrawled in biro and then mimeographed. Marra switches styles according to genre, but within each maintains the frenetic rush until the final mind-expanding SF opus, for which the 1970s comics of Paul Gulacy and Jim Starlin are influences, and for once detail and psychedelia are the order of the day.

Not everything is a bullseye, with ‘Naked Heroes’ occasionally tired and uninspired, and ‘Ripper’ running for too long. Those are rare misjudgements, as Marra has an instinct for when the joke has runs its course and the time has come to move on. It keeps the hilarity fresh and the interest high.

American Blood won’t be to all tastes. Some will be offended and some won’t get the joke, but those who buy in will be hard-pressed to name a funnier graphic novel this year.