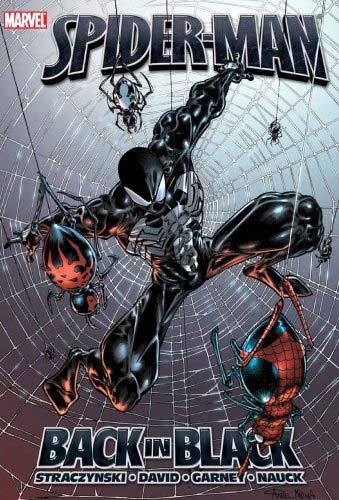 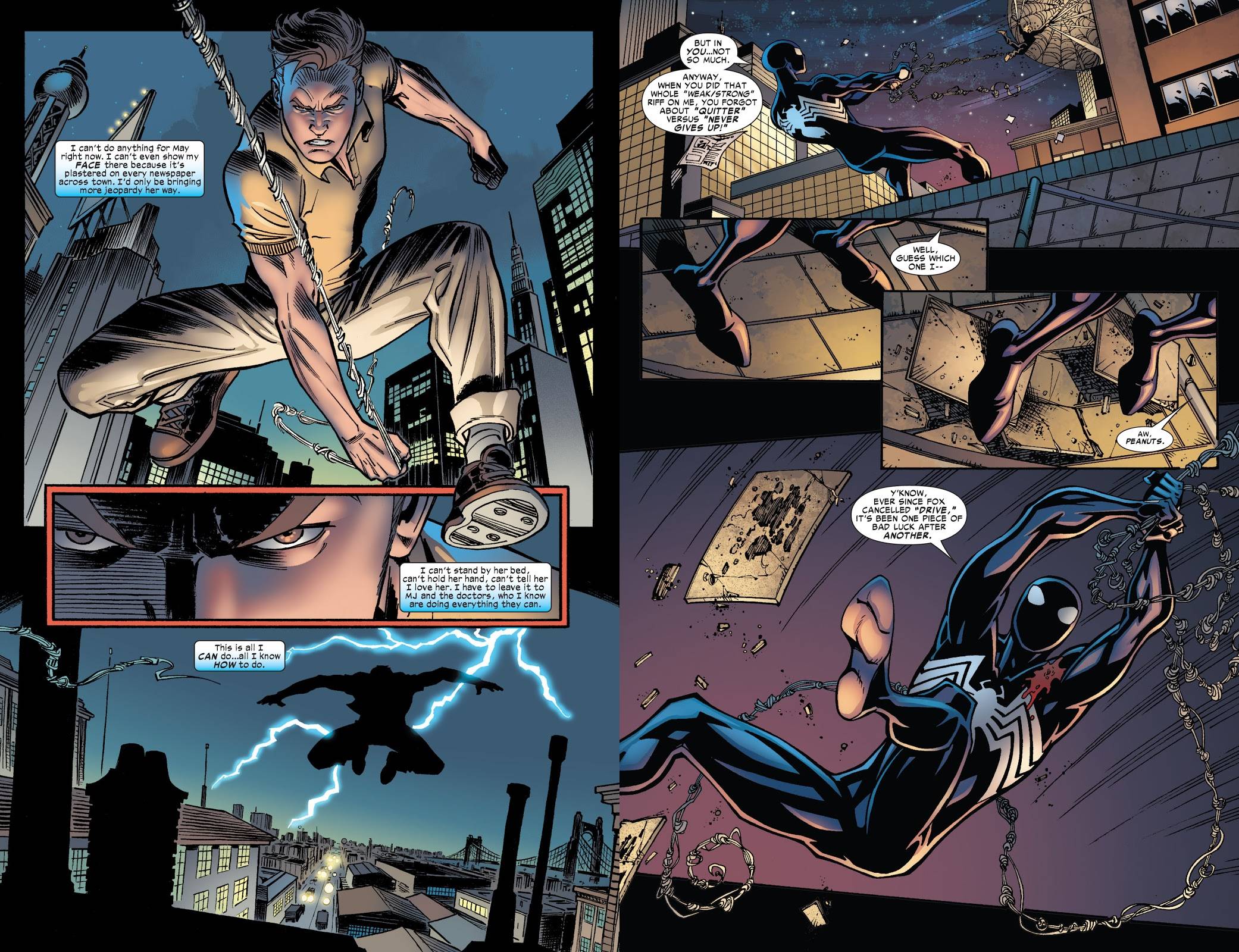 Before heading into the controversial redefinition of Spider-Man with One More Day, Back in Black fuses the 2007 Spider-Man material produced by J. Michael Straczynski and Ron Garney continuing from Civil War, with that of Peter David and Todd Nauck from Mystery Date. It results in a bulky collection, but an awkward one looking at different aspects of Peter Parker’s civilian life and superhero career.

As this volume opens, Spider-Man has a few problems on his plate. He supported Tony Stark until deciding that the treatment meted out to those opposing compulsory registration of superheroes was unmerited. The superheroes that did endorse the idea won the argument, and having revealed his identity to the world live on TV makes hiding very difficult. Far worse, though, is opening up his relations to acts of revenge from those with an axe to grind. At the end of Spider-Man’s Civil War collection his Aunt May was shot.

The title indicates the solution to one problem, ditching the hi-tech armoured costume Stark designed for Spider-Man and reverting to the black costume he’d worn briefly before. The black is a clever symbolic touch representing mood, and a disguise prompting a measure of doubt as to whether it’s Spider-Man or not. In the Straczynski material a driven Spider-Man hunts down the assassin, with the trail leading back to the Kingpin, currently in jail. Straczynski applied different writing styles to Spider-Man and this is his seat of the pants, page turning thriller mode. All events play out against May Parker’s worsening condition, frequently referenced, and a problem other than revenge is an ability to cover the costs of her treatment. The eventual confrontation with the Kingpin is a stunning piece of work, taking place in the jail for maximum impact. With that dealt with, the final chapter lacks costumes or villains, but is equally compelling.

Ron Garney’s artistic strength is the clarity of his layouts. There’s never a doubt as to what’s taking place, and if he’s not a great stylist, neither is he deficient, and he’s greatly preferable to the clumsy figures and strange faces provided by Todd Nauck on the David material.

The bulk of that is two longer stories, both efficiently sifted through with well crafterd moments featuring a supporting cast consisting of Flash Thompson, J. Jonah Jameson, and Daily Bugle employees Betty Brant and Robbie Robertson. The concerns of Sandman have a greater resonance than the conclusion to a long-running subplot of David picking up on a villain last seen in The Other. While Ronan Cliquet’s illustrations for the Sandman’s youth are nice, Nauck only occasionally provides creative layouts, so not making the most of the opportunities. It’s especially apparent on a delicately written character piece featuring a confrontation between J. Jonah Jameson and Spider-Man. Memorably written, it doesn’t look anywhere near as dynamic as it should.