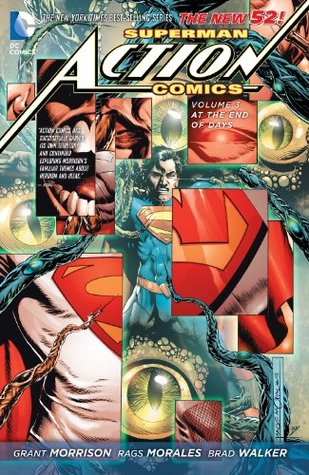 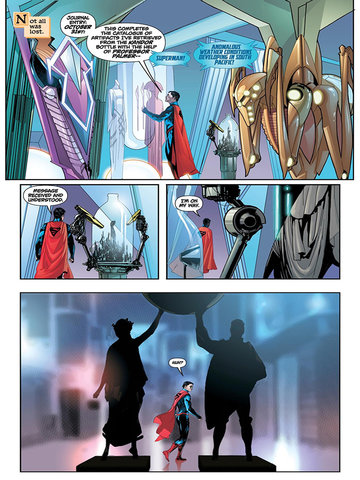 Grant Morrison’s re-telling of Superman’s origin and earliest days in Superman and the Men of Steel and through Bulletproof concludes here in the rather fittingly titled At the End of Days. Morrison painstakingly set up many little plot pieces over the first two collections, and now brings them all to a close, although not always neatly. The motivations of the K-Men, for example, remain unclear despite small origin stories trying to explain. It’s advisable to read the previous two books to make sense of this very dense and complex tale rather than come to it in isolation.

It’s now obvious that this run is more a summary of eighty years of Superman lore condensed and revitalised than anything completely new. Krypto the faithful hound, Mxyzptlk, the Legion of Superheroes and even Doomsday are all here retro-fitted for a new generation of readers. Those familiar with Superman’s history will recognise tributes to a number of classic stories, including The Death of Superman. Its not bad work but the All-Star Superman feel that was so alluring has tired itself out now. Tension is well maintained as the mysterious ‘little man’ is revealed as Vyndyktyx, a denizen of the 5th Dimension who bears a heavy grudge against Superman and all he stands for. It’s tense, gritty and runs at a decent pace with some well-illustrated shocks thrown in.

The art is superb, with a brilliant apocolyptic feel, some of the styles redolent of the artwork in Morrison’s earlier runs, others feeling very modern. Travel Foreman gives a tale about the Phantom Zone a spooky horror look with smart use of black shading, bright whites and odd character profiles. Like Bulletproof, this is a collaborative effort, but limited to Rags Morales and Brad Walker. Their styles are very different, but still complement each other. They build the tension as  Vyndktyx leads his Anti-Superman Army on a ruthless hunt for Superman. Brad Anderson’s colouring has contributed to the high quality over the series, and is again exemplary here.

Sholly Fisch’s contributions as a back-up writer for Morrison (at Morrison’s request) proved an extraordinarily good move. Working here with Chris Sprouse and Brad Walker, he really hits the mood every time. The Mxyzptlk story feels anarchic, mischievous, sad and fun all at once. ‘Goodbye’ is very moving, a reflection of a common regret – being unable to say all we wanted to say before someone passed. Morrison focuses on the main story, so Fisch highlights an aspect of that story with a deft and sensitive touch.

At the End of Days is a good effort from Morrison and his team. It’s never easy to change a character’s back-story, but Morrison is better than most at making it feel fresh and up-to-date. Comparison with All-Star Superman is unavoidable, and this falls a little short, but it’s still a realistic and relevant portrayal of a young man searching for identity, purpose and meaning. The characters look young, make mistakes and are instantly more relatable than the moral paragon Superman has been portrayed as in the past. It’s the humanity of Superman, the Clark Kent, that you can relate to: the insecurity, the loneliness, the impulsiveness, the journey of self-discovery that is growing up.