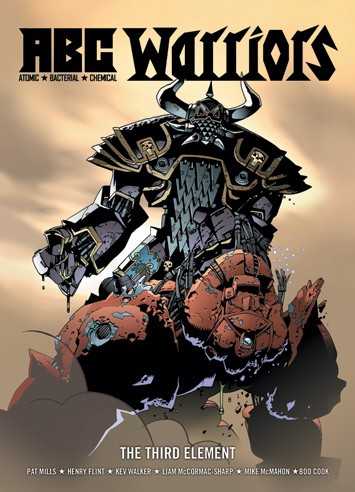 The Third Element is a low point for ABC Warriors. Writer Pat Mills has gone on record regarding the strained relationship at 2000AD under which it was created, and how insulted he felt as co-creator of both the feature and 2000AD itself to have his dialogue rewritten. No matter the rights or wrongs at the time, what remains is an unfocussed collection with Mills’ enthusiasm all-but evaporated by the halfway point, and by the end he’s coasting.

For reasons never explained here, the ABC Warriors have abandoned their mission to spread Khaos through the galaxy, and are back on Mars troubleshooting, as they were four volumes previously in The Meknificent Seven. And the series is back to black and white from the glorious colour provided by Kev Walker in Hellbringer. To be fair to Walker, his opening contribution ranks with the best art in the book, a homage to series co-creator Kevin O’Neill and Simon Bisley, over six pages of demented violence. Henry Flint (sample art left) is also excellent, young and enthusiastically pouring his soul into the art and outstanding with design and detail. Liam McCormack-Sharp is also new to the series, but not as effective. He’s so inconsistent that his work can be both beguiling and shabby on the same page, and some drawings have such a thick line they seem to have been produced by markers. Mike McMahon’s art is brilliant, but was the flat and almost abstracted style he’d grown into (sample art right) now suitable for an action strip? Boo Cook, then also inexperienced, is very obviously influenced by 2000AD’s classic early 1980s artists, particularly Carlos Ezquerra, but hasn’t got their storytelling clarity, and has some foreshortening problems. Like Flint, though, there is an enthusiasm that carries him a fair way.

When originally introduced, ABC Warriors was an episodic series set on Mars that worked very well, but this time Mills’ inspiration has been sapped. An ecological agenda is hammered home relentlessly, although the fundamental idea that much like Mother Earth, Mars has a guiding internal intelligence, Medusa, is viable. She’s doing everything possible to rid her planet of human invaders. However, even ideas that have a novelty never spark into full life, one being the introduction of H.G. Wells’ original tripod using Martians from War of the Worlds. Much else lacks sense. ABC Warriors has always exemplified the wilder, more anarchic 2000AD strips, but never before had that extended to so many randomly inexplicable developments. One ABC Warrior dies. Oh no they don’t. Another does with no fanfare, discarded like a used tissue. Mongrol, dim before he was silent, now has erudite speech patterns. Dig deeper and more makes little sense. There are moments of fun, but they’re few and far between.

The Third Element seemed to kill Mills’ enthusiasm for the series, yet it again proved the series that wouldn’t die, and ten years later we had The Shadow Warriors. Both are combined in ABC Warriors: The Mek Files 03.