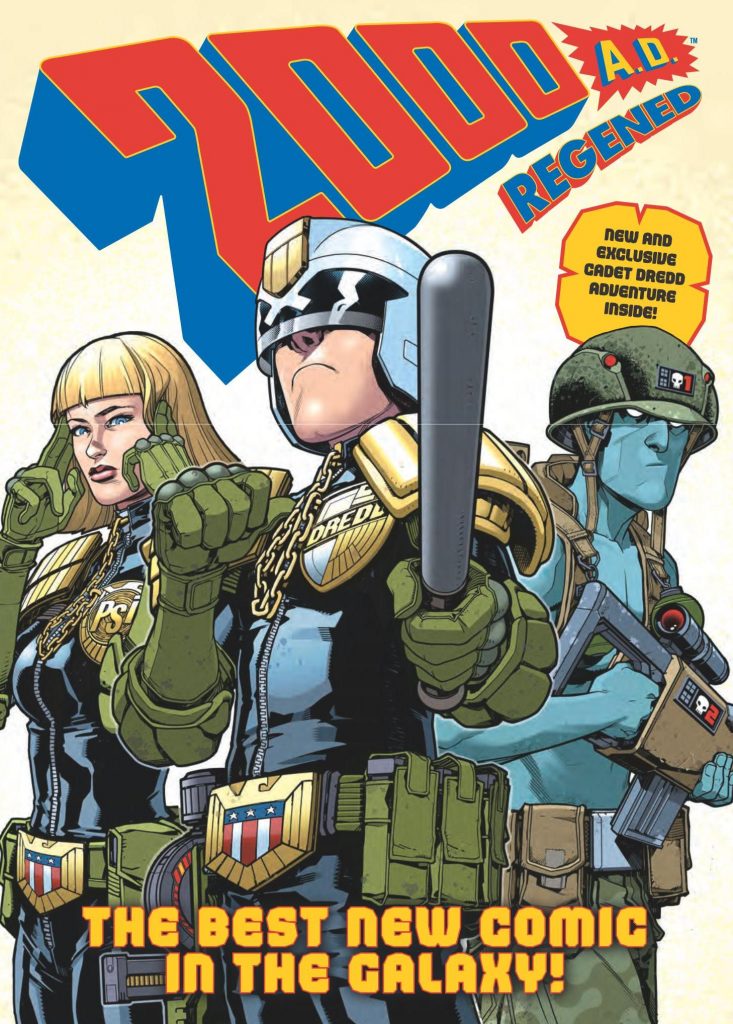 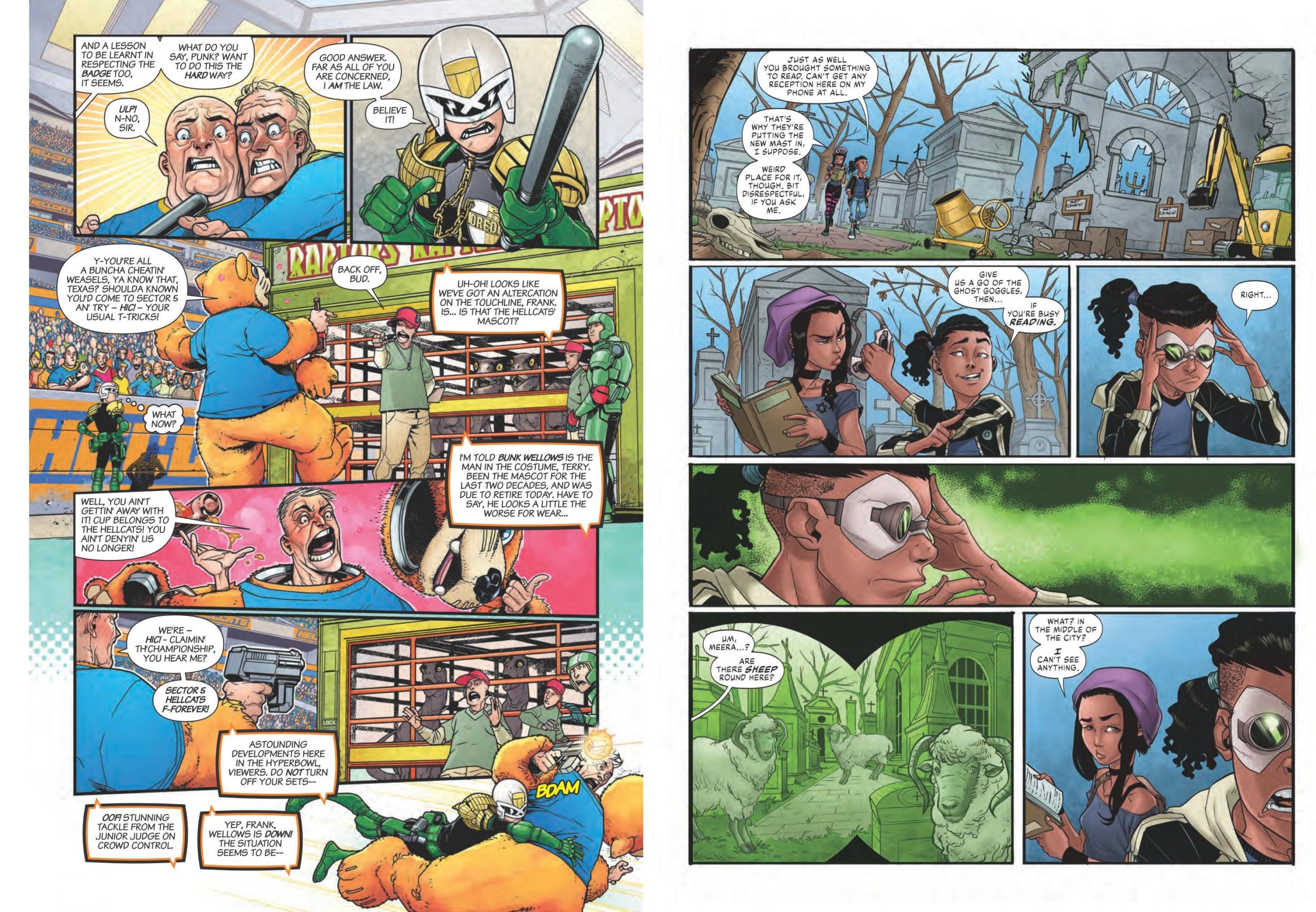 2000 A.D. began aimed at younger readers when launched in 1977, but unusually for a British weekly comic, instead of the readers giving up after around three years as per industry perceived wisdom, considerable amounts of them just kept reading. Eventually, the title only consisted of more sophisticated series aimed at older readers. 2000 A.D. Regened, therefore is a special twice yearly issue attempting to attract the age group the comic was intended for when launched, and this volume combines the first two attempts.

It sticks largely to the parent comic’s A-list characters, although some like Rogue Trooper aren’t overly used in the regular title these days, while others are seen when younger, such as Matt Smith focussing on Cadet Dredd. He and Neil Googe turn in viable homages to the early, simpler Dredd strips, although it’s plain weird seeing Dredd as a boy in uniform (sample spread left). Chris Weston and Ilias Kyriazis follow Googe’s lead for detail and clarity in illustrating longer, but equally satisfying strips. Alec Worley’s Strontium Dog is also in training, but it’s a more straightforward story drawn by Ben Willsher as if animation.

Leah Moore and John Reppion’s Finder & Keeper is the only newly created feature. Two teens discover ghost hunting equipment and make a career of adventuring. It’s a viable idea, but doesn’t fit the tone of 2000A.D., closer resembling the type of story that appeared in the likes of Misty back in the day. Davide Tinto’s art is attractive looking, but can’t keep the people consistent. An adult version could be interesting.

Psi-Judge Anderson, Rogue Trooper, the Gronk and D.R. & Quinch are all seen in their adult incarnations, or in the case of the latter, as adult as they become, as co-writers Owen Johnson and Colin Bell supply their manic journey ever further back into the past attempting to free comics. Indio’s art is too packed, though, The spiritual complexity of Psi-Judge Anderson doesn’t reduce to simplicity as well, although readers unfamiliar with that get a story about her effective use of psychic powers from Worley and P.J. Holden. Two Rogue Trooper stories from Cavan Scott and Nick Roche should please fans of any age, not greatly different from his classic 1980s material, with Roche drawing some amazing wardoids and monsters. David Baillie and Rob Davis’ Gronk strip is more obviously aimed at younger readers, but a fun contrast of the most timid creatures in the universe and a monster.

As they pretty well always have been, the ‘Future Shock’ stories are opportunities for new talent to impress, and it’s Brett Parson’s art for ‘That Weird Kid’ that does. Clear storytelling, detail and imagination combine for an excellent job in packing so much into four pages.

By and large 2000A.D. Regened succeeds in simplifying the comic’s appeal for a younger audience, and at its best, largely the Cadet Dredd strips, older readers will have fun also. Everyone ought to enjoy the puzzle pages at the back, especially Henry Flint’s devilishly designed escape spread. A second dose of thrill power for youngsters follows in 2000A.D. Regened 2. 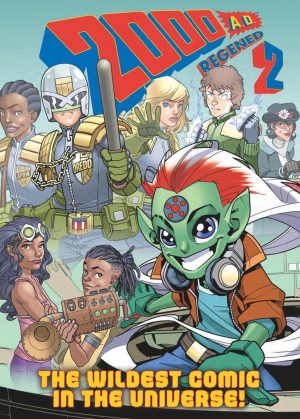 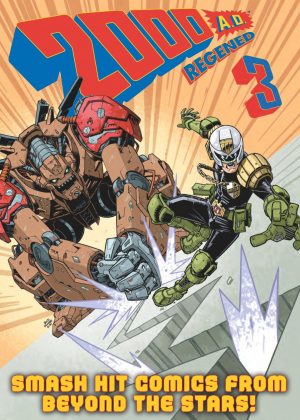 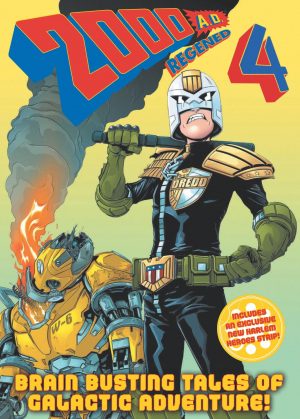