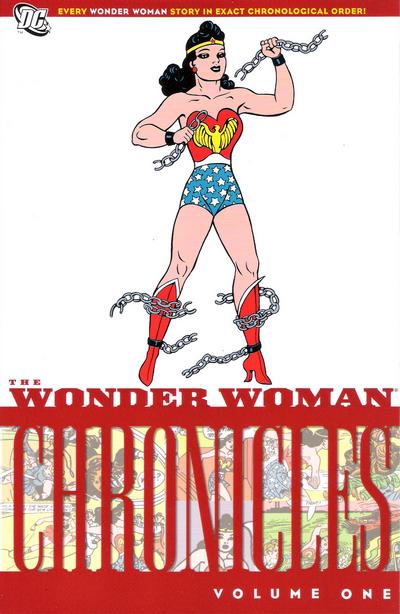 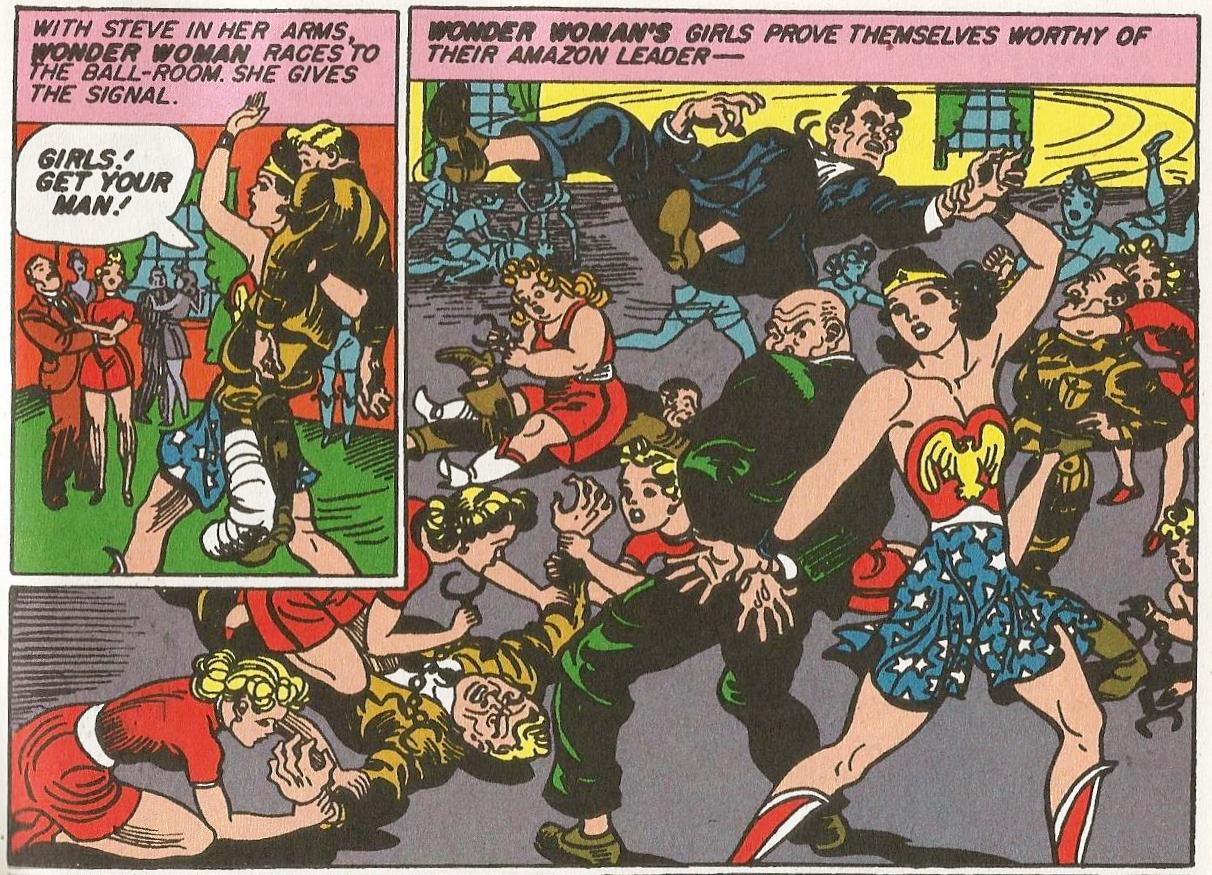 When the hardcover Wonder Woman Archives proved successful, Wonder Woman was added to DC’s Chronicles series, colour collections in more affordable paperback format. A second attraction is the  series’ boast is that it reprints “Every story in exact chronological order!”

Eschewing extras, other than a contents page with best-guess writer/artist credits, this reprints the Amazing Amazon’s earliest outings, approximately covering her first year of existence, including the debut of her own series. The non-reflective paper is easier on the eyes than the Archives’ slicker stock, and closer to the original pulp, demonstrating the impact format can have on the experience of reading the same stories. With the Archives, the expectation is more academic/historic/referential, whereas this lower-budget, but still respectable paperback leads to an altogether more relaxed reader!

The basics are known to everyone with a nodding acquaintance with the character; Princess of a hidden island of Amazons rescues a shot-down Military Intelligence pilot, wins the right to be her island’s ambassador to ‘Man’s World’ in an elimination contest, and returns with him to America to fight for the freedom both of humanity in general, and womankind in particular.

This summation fails to convey the personality of Diana, Wonder Woman, in these early stories. Part ingénue, falling in love with literally the first man she ever met, thrilling to new vistas, fashions and experience, and demonstrating a playful exuberance in her new world and its ways; part experienced warrior, deflecting attacks on her almost as an afterthought, dismissive of people’s low expectations of themselves, and leading by example. Unlike later iterations, the early Wonder Woman was no ‘Super-Amazon’, with Gods-given powers, but the best among equals. Any woman, given her training, could theoretically achieve her feats. It was a true example attaining the ultimate in human potential.

Achieving a position as a nurse by identity theft and fraud, the freshly-surnamed Diana Prince follows her new inamorato, Steve Trevor, into Military Intelligence as his aide. Clearly security screening was in its infancy at that point.

From there, it’s a swift-moving sequence of adventures alternating Axis-bashing with introducing key aspects of  Wonder Woman’s milieu; the brilliant but corrupt Paula Von Gunther, the Lasso of Obedience (not ‘truth’ – that was a later retcon from the TV show), the Holliday College Girls, and the constant reiteration of sentiments startlingly ahead of their time.

Hearing a victim’s complaint, “What can I do? I’m just a weak woman!”, her classic response is “Get strong! Join the WACs or WAVEs! Earn your own living!” The autonomy of women, and responsibility for their own actions, was the underlying and refreshing message at a time when all but a handful of women in comics were eye-candy or hostage-bait.

William Moulton Marston, a popular psychologist and expert self-publicist who seems to have comprised equal parts Freud, Barnum and Lothario, originated the character in response, allegedly, to the “bloodcurdling masculinity” of comic books. Wonder Woman was a platform to express his ideas about the imbalance of power between the sexes, and even today, some of them seem pretty Out There, but the strength of his narrative skills prevails.

Artist Harry G. Peter also had his own feminist background, having illustrated pro-suffrage cartoons in the early part of the 20th Century. Peter brought a mature and confident style, illustrative rather than dynamic. His ornate backgrounds are reminiscent of early woodcut prints, but carry a conviction and gravity that sold the character’s unique world.

Greater, and stranger, things were to come, but these stories made DC’s First Lady a force to be reckoned with, creatively and commercially.