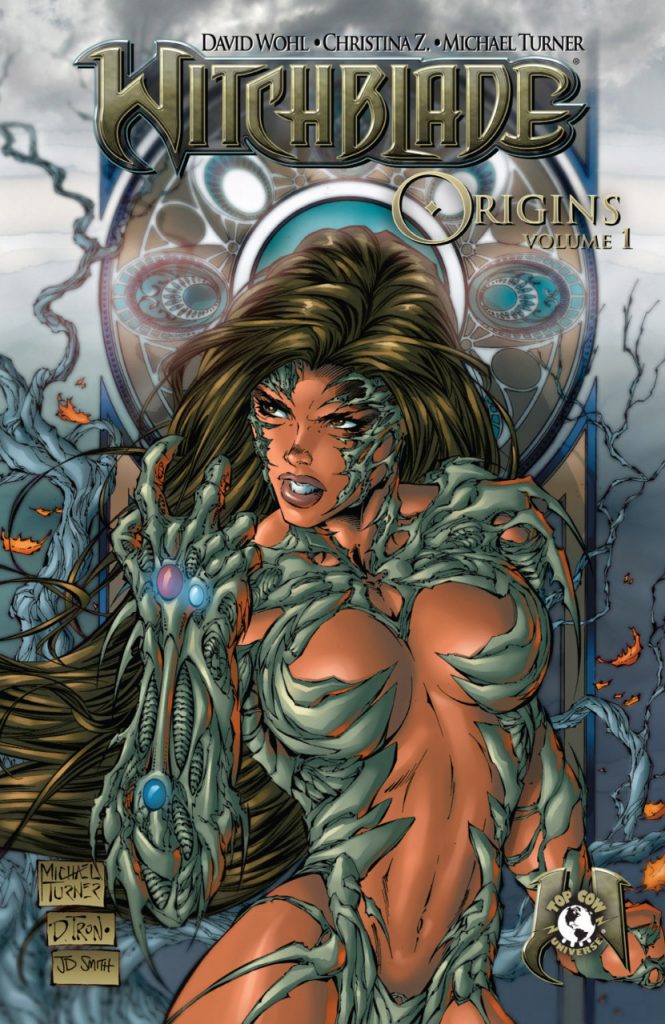 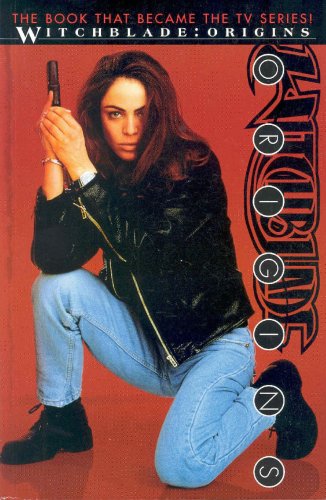 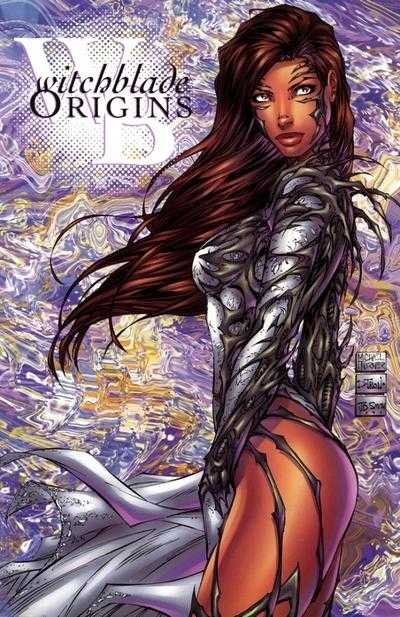 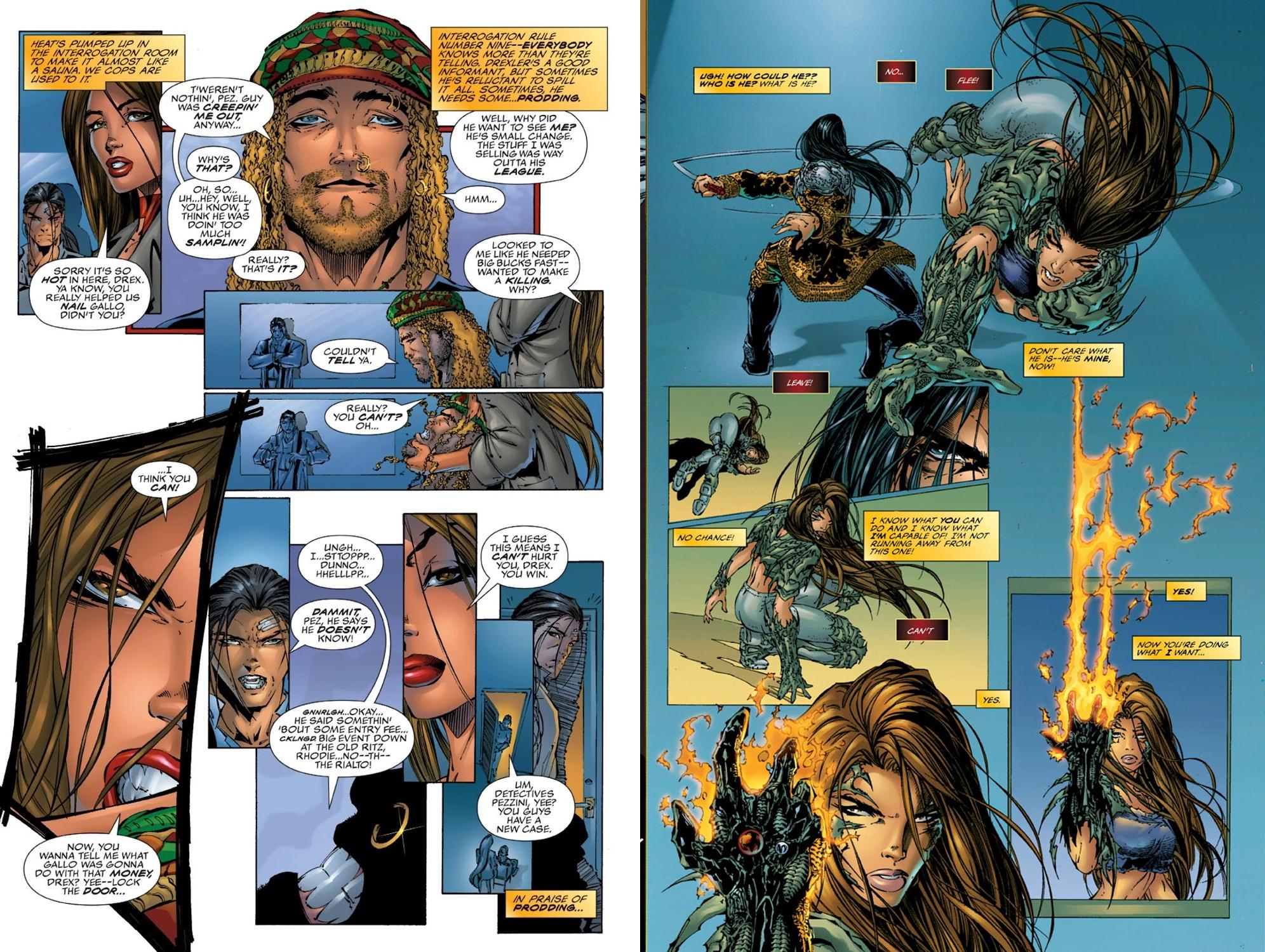 Confusingly, it’s not the series starting with volume one that presents the earliest days of Witchblade, but this Origins series. Are you looking for a series that screams “1990s” at your face from a distance of six inches? It’s all in this earliest incarnation of Witchblade. We have the sleazy, objectification of any woman, the lead character wearing as few clothes as possible as often as possible, pin-ups substituting for storytelling and plots prioritising style over substance. And at the time it worked. Witchblade sold very well, generated a TV show and ran for ten years.

The reason is Witchblade having two strong selling points outweighing a lot of detriments. The first is artist Michael Turner. He may be drowning in the spirit of excess that characterised too many 1990s comics, but beneath that the talent glows. Ignore the shoddy storytelling and take a look at the stoned informant on the sample page, a really nice character study. The second selling point is that if all the exploitative nonsense is stripped away there’s a fundamentally sound premise and the novelty of a gothic horror crime story. Impossibly glamorous New York homicide officer Sara Pezzini has a vigilante sideline, threatening those the courts have freed, yet she knows are guilty, and she eventually hooks up with an evil ancient artefact that transforms her. Wealthy businessman Kenneth Irons has been aware enough not to try wearing the witchblade himself, but figures he can control whoever it chooses, and he has more than capable protection in the form of the mysterious Ian Nottingham.

While the premise may draw readers in as intended, that’s not the same as it being well executed. Writers Brian Haberlin and David Wohl’s captions drip melodramatic excess, their dialogue veers wildly between tough guy posturing and overblown soundbites intended to establish a sympathetic character, that is unless it’s lazy plotting substituting for profound advice. Villains monologue, many commenting on Sara’s looks, that is when they’re not shooting at her. Most people would crumple to the floor with a bullet in the shoulder, but Sara’s that tough the only response it elicits is a threat. It’s all nonsense, and doesn’t improve for Turner co-plotting or Christina Z replacing Haberlin as Wohl’s writing partner halfway through. The input of a female writer doesn’t build Sara into anyone more realistic, as every emotional response is determined by what little plot there is. If a certain mood is needed to move it forward, Sara will slot right in, irrespective of whether there’s any consistency with the way she’s been before. At a guess what’s being aimed at is the idea of a woman being simultaneously attracted and repelled by a man, but this requires a subtlety beyond the writers’ capabilities. When the supporting villains are more credible as people than most of the cast intended as sympathetic, you’re not reading a masterpiece.

The only genuine surprise occurs in the last chapter, Witchblade at last veering away from the predictable and the turgid, and offering hope that the future might be brighter in volume two. Earlier editions of that were titled Witchblade: Revelations. Both are also found in the first volume of The Complete Witchblade. 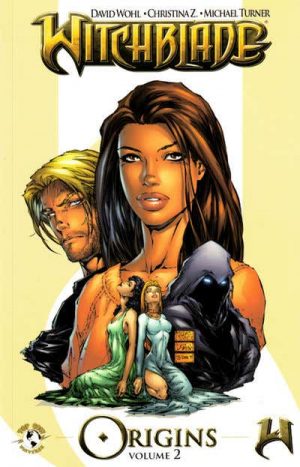 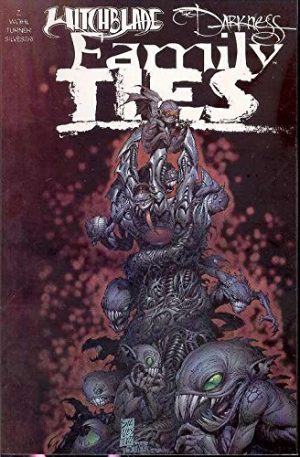 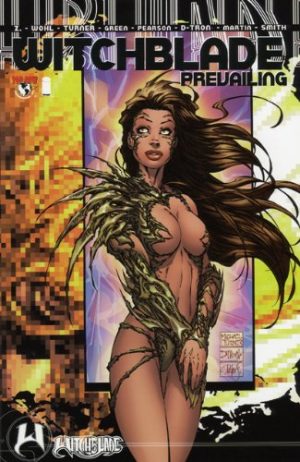