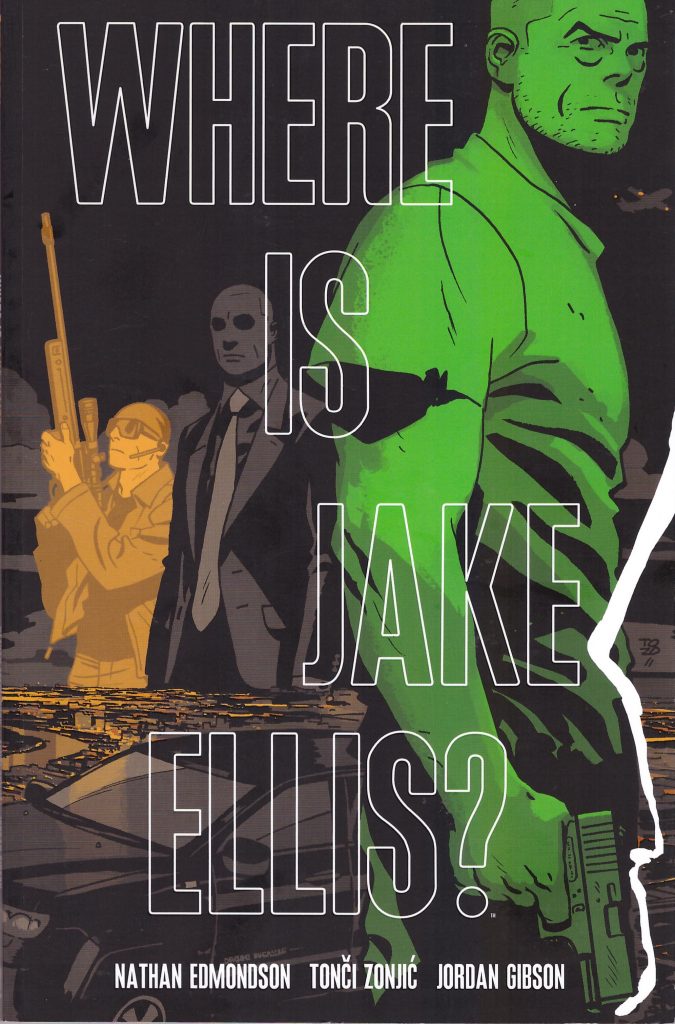 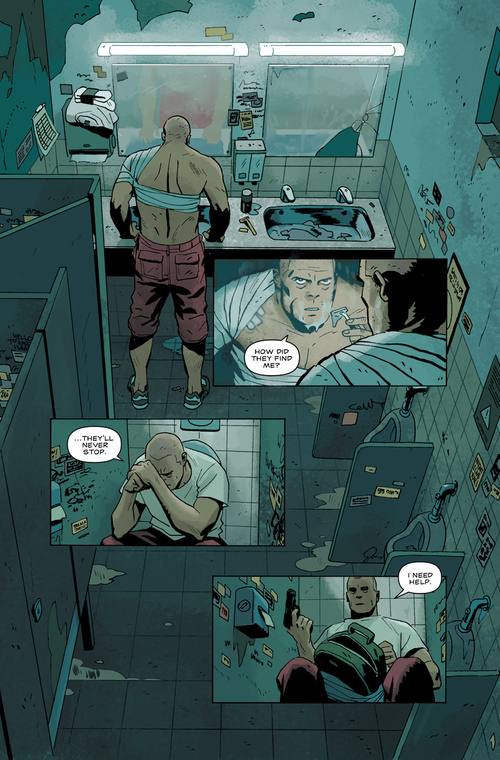 Nathan Edmondson and Tonči Zonjić came up with a great concept for the predecessor to this, but it’s one that shouldn’t be revealed until you’ve read Who is Jake Ellis? If you haven’t and don’t want the surprise ruined for you, don’t read past the next paragraph.

Zonjić is a phenomenal artist, and raises any project he works on with his deft layouts, and deceptively simple looking style. It’s nothing of the sort. A lot of preparatory work goes into deciding the viewpoints and ensuring the art conveys the accelerated pace of the plot, with a hint of how much is involved provided by his sketches in the back of the book. A couple of times he really lets loose with panels overlaid on a diagrammatic path as someone moves from once place to another in a confined area, and they look great. His style is different, but his elegant simplicity and wonderful loose sense of movement can bring Alex Toth to mind, and compliments don’t come any higher. Jordan Gibson keeps the colours flat and simple, and that cements the look.

Jon Moore once worked as a CIA analyst. His training makes him adaptable, resourceful and resilient, but he’s also been an abduction victim, and someone messed with his mind. Whoever that was saddled him with a spectre only he can see, Jake Ellis, and Jake can somehow advise Jon so that things work to his advantage. He can roam independently and as Who Is Jake Ellis? ended, Jon learned the why of what’s happened to him, but not the how or the who, only that they’re an immensely powerful organisation, seemingly able to track him anywhere in the world. They’ve done it again in Bangkok. The problem Jon has is that he rescued Jake, and since then Jake’s no longer been able to help him, which sounds strange, but works in context.

Far from having solved his troubles in the previous book, Jon’s discovering that his one time captors are keener than ever to reacquire him. He’s accompanied by a new character, Mollie, embassy staff worker whose eyes are opened to an entirely new world as her life is constantly endangered, and not just by Jon. Her purpose is largely as encumbrance, but Edmondson’s plot is otherwise thrilling, excellent at setting up escape routes, only to block them off. He does this time and again without it ever coming across as contrived, and some of the eventual revelations are “doh!” style obvious, but even knowing that they’ll pass you by at the time because the pacing of Where Is Jake Ellis? is just breathtaking. Have your inhaler handy just in case. An indication of how good this is: around halfway through Edmondson no longer needs the dangling mystery of what happened in the past and spells it out lock stock and barrel. It’s a big deal, but you’re not going to want to know that. You’re going to be wanting the scientist without conscience to hurry his explanations along because you’ll be desperate for Edmondson to continue the main plot. The tension is unbearable because he keeps handicapping Jon or Jake or both.

Can the finale possibly live up to the frenetic rush of what leads up to it? Hell, yes.