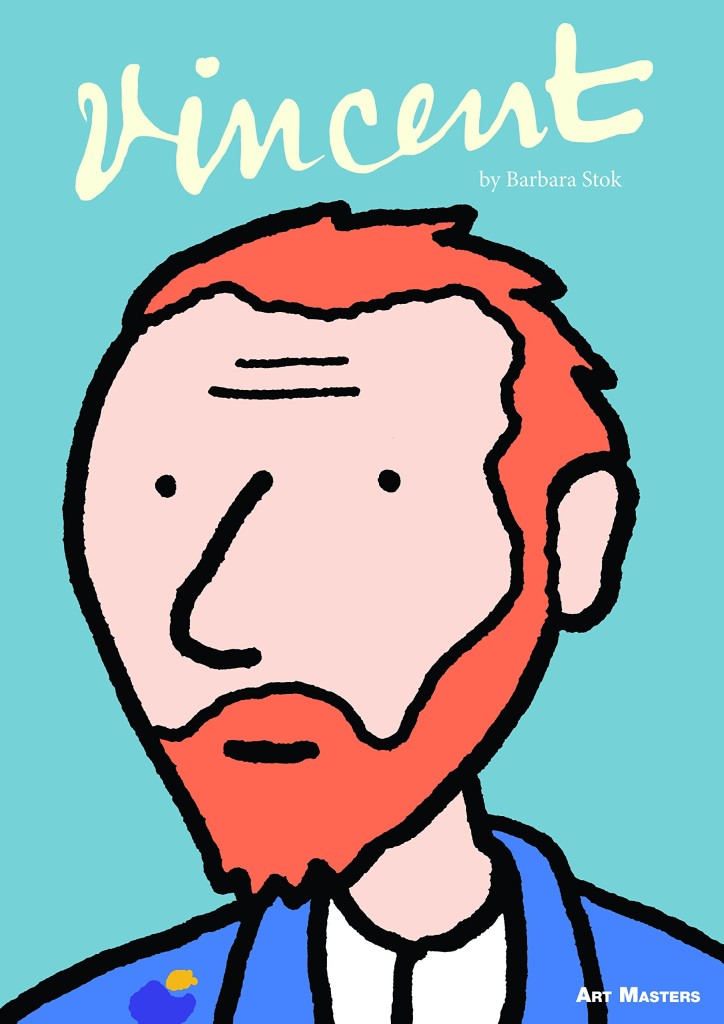 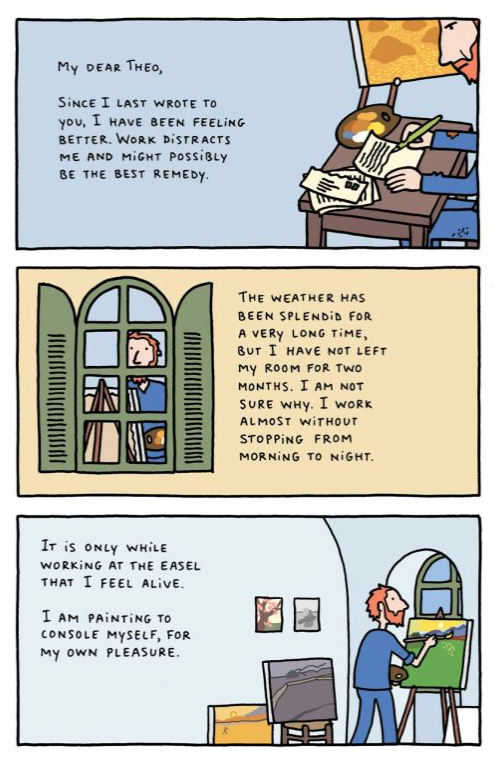 Few modern painters are as famous as Vincent van Gogh – his landscapes and sunflower images are iconic, and his trademark brushstrokes instantly recognisable. The astounding prices of his paintings today are in sharp contrast to their reception in his lifetime, when he sold virtually nothing. His personal struggles, resulting in the almost fatal severed ear, are equally famous. A prime subject then to kick-off a series of graphic biographies of Art Masters. Van Gogh is an emblem of the tortured artist – the other side of the coin from charismatic lover and bon viveur Picasso, subject of the next volume.

Vincent is written and drawn by fellow Dutch artist Barbara Stok. This is her first English publication, but she’s admired in her homeland – she won the 2009 Stripschapprijs prize for her highly personal and autobiographical body of work. If the current project seems a jump from there, it’s a manageable one.

Avoiding a whistle-stop chronology, she focusses on a key period, when Vincent relocated to the inspiring landscapes of Southern France. She portrays him as a committed, energetic, but ultimately exasperating man. Fellow painter Gauguin struggles with him, and is poignantly less committed to their friendship. Theo van Gogh, aiding his troubled brother by sending money month after month, comes across as a man of immense generosity and patience, but has his own life – just married and planning a family. So he must have seen the appeal of supporting his demanding brother from a distance! Theo is a connoiseur and art dealer, so there is some quid pro quo – Vincent sends him paintings, and Theo provides helpful feedback. Without this support, who knows how it would have gone for Vincent? He probably wouldn’t be the subject of any books.

There are challenges to a project like this: how do you represent the artist’s distinctive imagery and style, or his inner world and creative process. Stok does a credible job with Vincent’s images, rendering them effectively into her trademark ligne clair cartoons. When depicting the paintings themselves, she rationalises his statement brushstrokes into her even pen lines. The wordless collections of van Gogh imagery are some of the best pages, providing visual and narrative contrast, and evoking the peace he found in painting.

The colouring is a major contributor to the visual impact, and Ricky van Duuren deserves a more visible credit. He nails the distinctive colour palettes of van Gogh wheat fields and starry skies, and renders everything else in suitably vivid flat colours.

Vincent’s fluctuating mental health is integral, and Stok’s smart visual devices communicate this. She heralds the start of his episodes by adding increasingly busy ‘brushstrokes’ around his head. This escalates at times to the exaggerated poses and perspectives of later Expressionist art, which could be jarring, but here seems a natural extension of Stok’s studiedly naive style. This tells us he had episodes, but it doesn’t convey with any depth what he experienced. Surely clues have been sourced in, say, his letters to Theo? Given the fame and importance of his mental health, and its potential impact on his visionary work, it seems an opportunity missed. To be fair though, its a challenge few would have taken up.

Stok and van Duuren’s finest moment is the sequence where he seems to disappear into the landscapes of his own imagination. It’s both charming, and transcendent, contributing to a highly readable account of this most talented and troubled of artists.