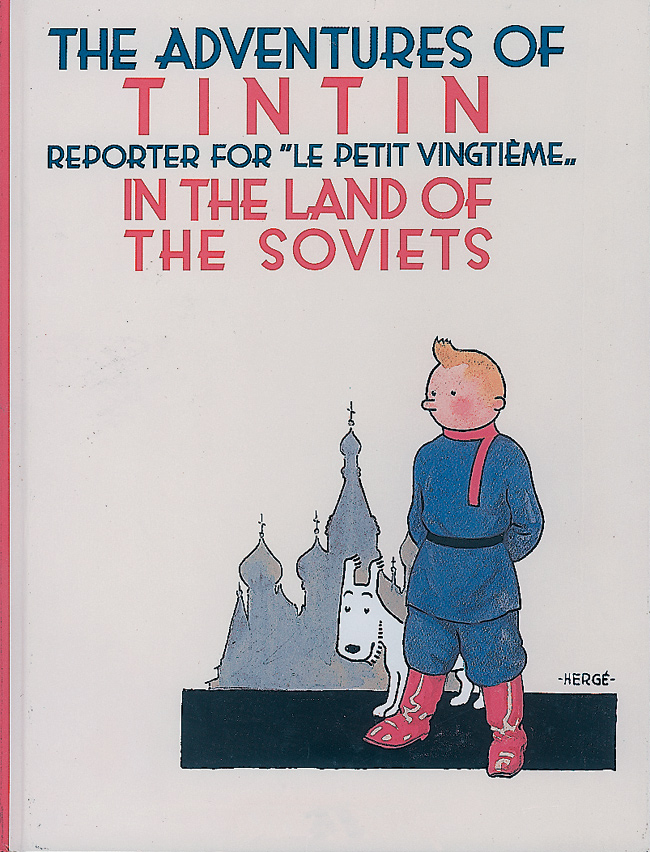 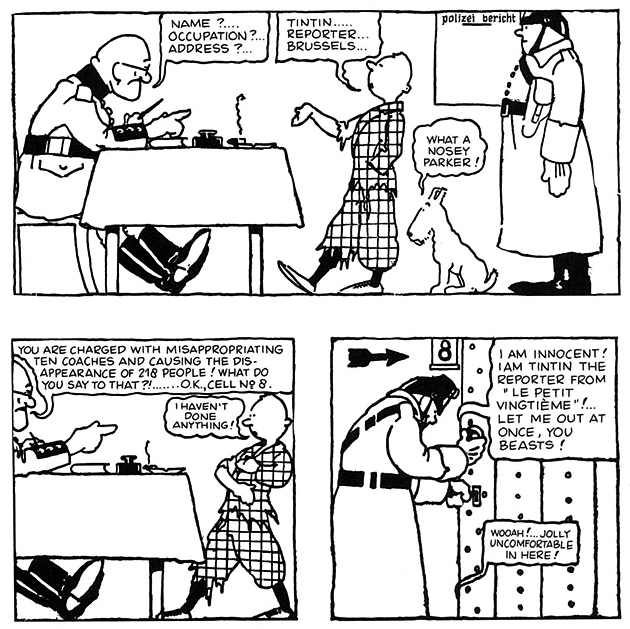 Hergé, who took his pen name from the reversed initials of his name (Georges Remi, as it sounds in French) was only 22 when Tintin first appeared in Le Petit Vingtième, the children’s supplement of Le XX Siècle, on January 10, 1929. The newspaper’s politics – right wing and Catholic – were to determine the topic for the first adventure. Unlike Hergé’s later work, characterised by an almost obsessive degree of research, he used a single book as the basis for his story. It was extremely disparaging about the Soviet regime, which mirrored the newspaper’s opinion, and entire scenes were inserted into Tintin’s first adventure.

The plot? Tintin visits the Soviet Union and discovers, during an extended chase that covers almost the entire book, that the Russians are using propaganda to try to convince the world their methods are superior. Over the course of the chase Tintin steals a motorbike, two cars, two boats, and a plane: almost all of which he crashes, sinks or blows up. The chase scenes, when they don’t just run together, are interspersed with an exhausting list of unlikely plot devices. Tintin disguises himself as a ghost, is blown up, meets an escaped tiger, fights an intoxicated bear, and is even executed by firing squad (spoiler alert: he survives). Interestingly, it’s the only Tintin book where we see him doing any reporting, when he apparently writes many thousands of pages over the course of an evening. Which he then neglects to post.

It must be borne in mind that this was during the infancy of the comic strip, and Hergé’s style, though extremely rough by modern standards, was truly pioneering. This new style was heavily influenced by American newspaper strips like Krazy Kat, the Katzenjammer Kids, and Bringing Up Father. It abandoned explanatory text underneath pictures in favour of speech balloons and captions, and was so novel that editors had to be told by Hergé to stop adding explanatory text beneath the strips.

Hergé also draws strongly on cinema of the time, from Fritz Lang to the Keystone Kops, and incorporates elements from contemporary and traditional artists. Although he had no formal training, he was an accomplished fine artist, with a magpie mentality that served the strip well.

This was the only Tintin book not to be revised and republished, which led to a lucrative trade in pirate copies of the first printing. Hergé, embarrassed by his early efforts, eventually agreed to a facsimile of the book being made available in an attempt to confound the pirates and satisfy the demand from fans. In Hergé’s defence, no one had any idea that these strips would be the start of a publishing phenomenon, and that they’d be criticised, reviewed and pored over for decades. The second book, Tintin in the Congo, particularly came in for accusations of racism, and for a long time it too wasn’t widely available.

Non-existent plotting and poor artwork make this a book for completist Tintin fans only. One star for the pioneering, though admittedly rough artwork, and one for its historical importance, which can’t be overstated: this is the first in a series of books that would go on to sell over four million copies annually, as well as spawning cartoons, movies, merchandise and even a theme park. And which, almost a century later, has an appeal that shows no sign of abating. 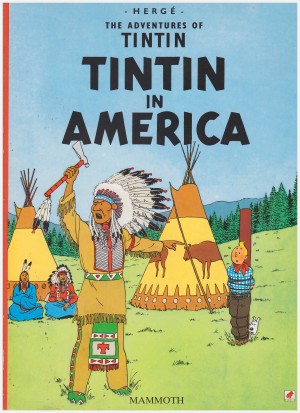