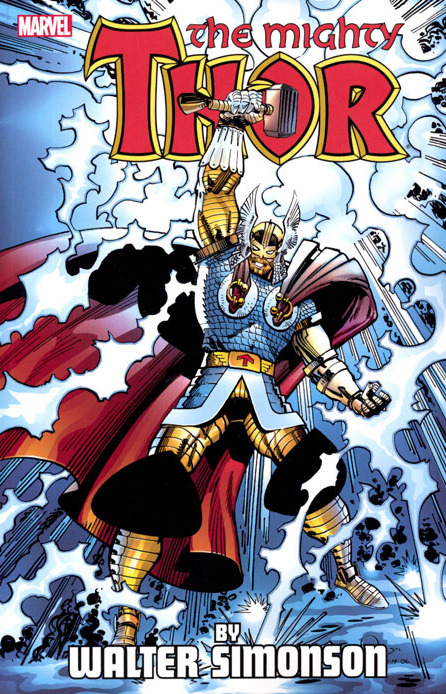 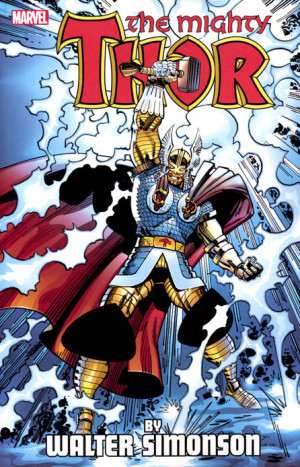 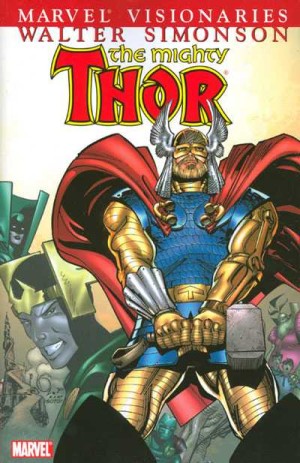 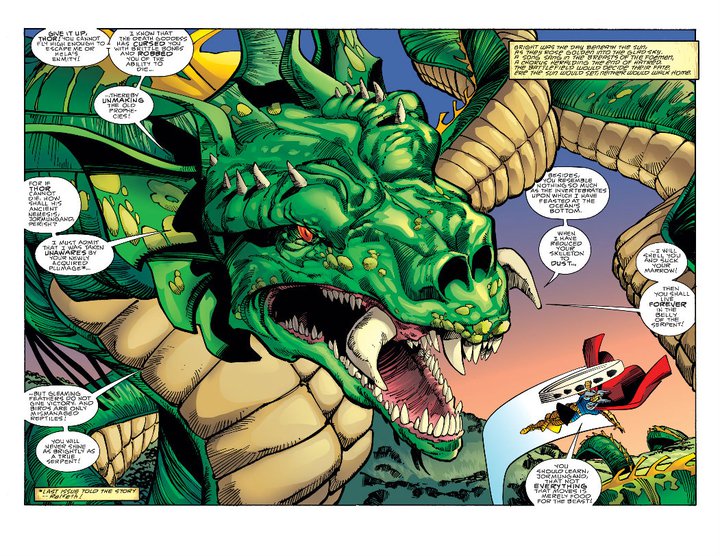 This is the last collection of Walt Simonson’s frequently astonishing four-year run of stories about the God of Thunder. Thor wears a new costume here, the first change to his appearance since his inception, and it’s due to the curse placed upon him by Hela in the previous volume. Thor tries to protect his compromised body with some assistance from Tony Stark, but eventually, in agonising pain, he has no choice but to encase himself in a full suit of Asgardian armour, shattering the portals to the other Nine Worlds as he does so.

Simonson weaves lots of actual Norse mythology into this final volume, from Thor’s armour to the Dark Elves summoning of Grendell from the epic poem Beowulf. Grendell’s design might be Klassic Kirby but his origins are all traditional. So too are the Frost Giants, who intend to avenge themselves upon Balder and all of Asgard. A guest appearance from Iceman of the X-Men begins one of the most amazing sequences of all-out action as Thor must face Jormungandr, the Midgard Serpent, prophesied in myth and legend to be the Last Battle. Sal Buscema draws all the stories in this volume except this chapter, which Simonson depicts in full-page and even double-page spreads of huge virtuosity. The end of one of the greatest battles in Thor’s history leaves both combatants nearer death than life, and the ingenious solution for the Thunder God’s utterly inert body brings back one of the most feared characters to ever appear in a Thor story. The final encounter with Hela is brilliantly staged, and Loki gets a little payback for all his scheming in the last pages of this incredibly entertaining saga.

Over the four years of his tenure on The Mighty Thor, Walt Simonson crafted an amazing array of brilliantly inventive, dramatic and exciting stories. We have the debut of Beta Ray Bill, Malekith and the Casket of Ancient Winters, The Surtur Saga, the Executioner’s last stand, Balder the Brave, Frog Thor, the Midgard Serpent – and that’s just the high points. The sheer quality and variety of the storytelling during his run is easily the equal of Lee and Kirby. Perhaps even better? It’s without doubt one of the greatest story cycles in the history of Marvel Comics.

If you can’t get your hands on a copy of The Mighty Thor by Walt Simonson Omnibus that collects the entire run in one Brobdingnagian 1192-page colossus, then this five-volume collection is the best way to read the whole thing. A previous reprint of this volume, Thor Visionaries – Walt Simonson, Vol. 5, featured a slightly different number of issues. It is now out of print.