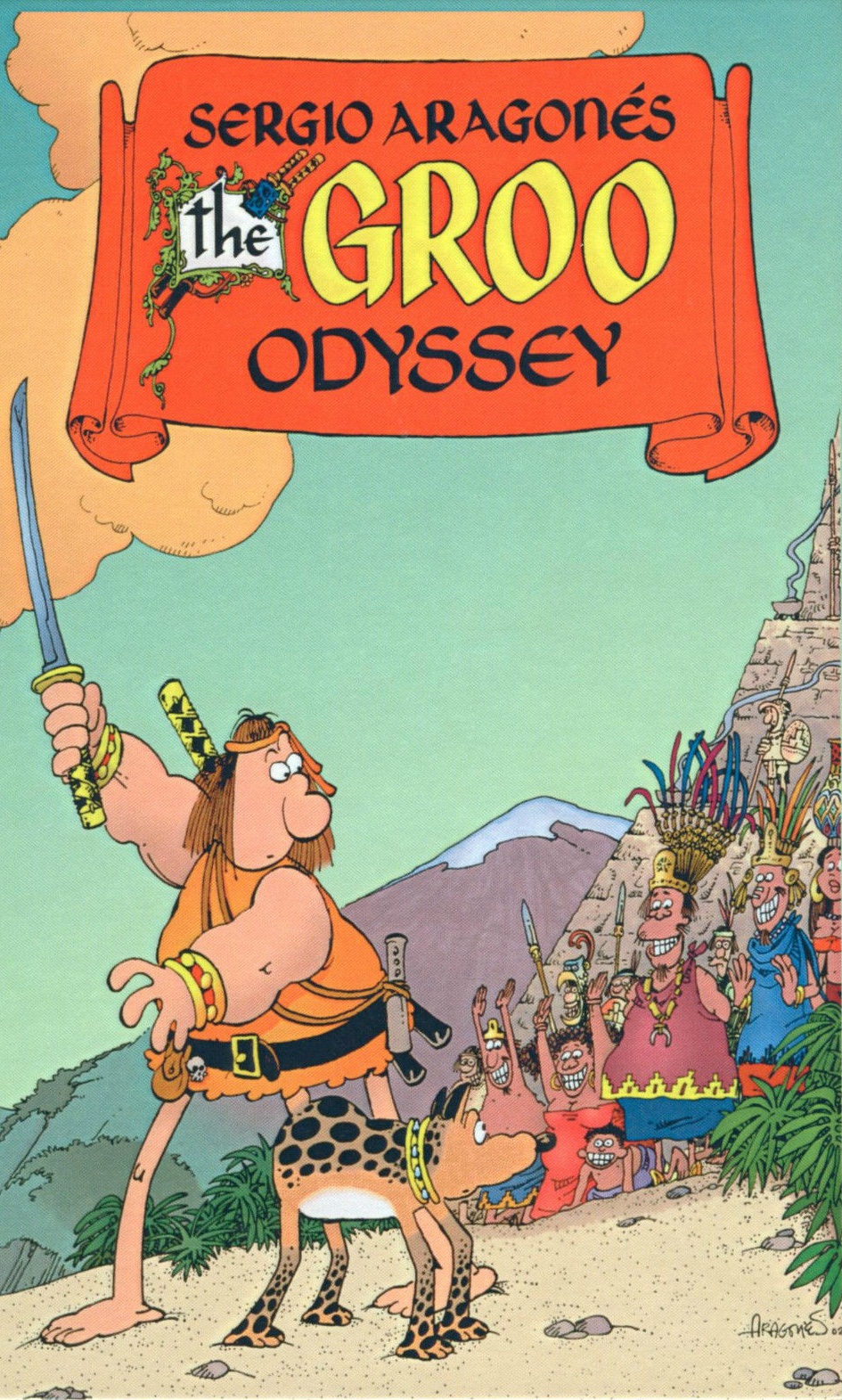 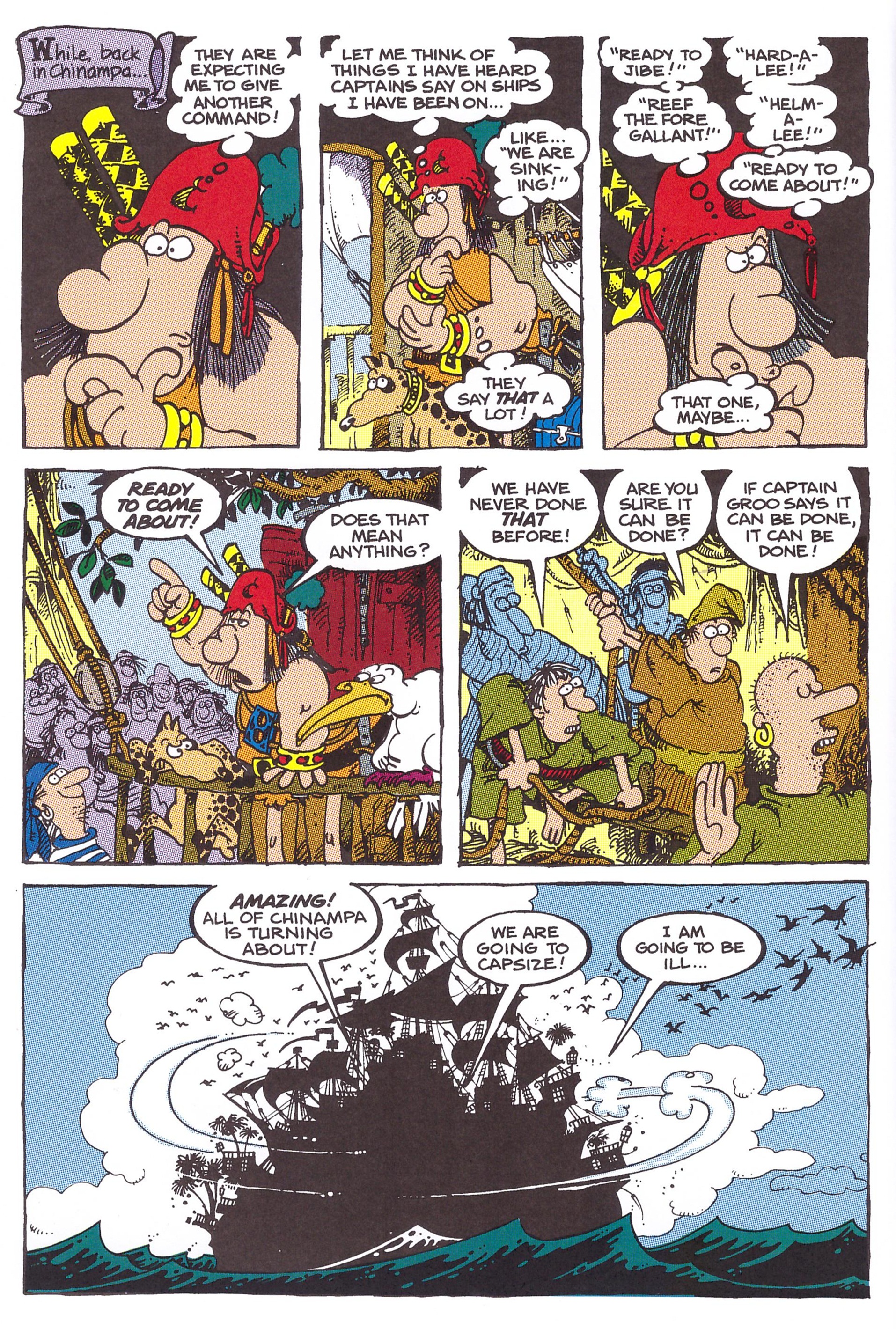 Groo, the man who sinks every ship he boards (unless his dog Rufferto’s with him), the captain of his world’s equivalent of an ocean liner? Surely some mistake, but no, he manages to convince strangers of his seafaring craft. What could possibly go wrong? Sergio Aragonés and Mark Evanier stretch the tension to almost breaking point in the opening story as we know Groo is going to sink the ship, but how? Without wanting to give anything away, the next story has Groo and Rufferto washing up on the shore of a strange land, where there’s a brilliantly designed temple. That’s one of those fine stories where Groo’s presence disrupts a centuries old peaceful way of life, and where it can be asked who’s more stupid, Groo or the people who follow him. Sometimes Aragonés and Evanier don’t have a complimentary view of the masses.

Aragonés’ cartooning is always phenomenal, the panels packed with people going about their business, but he excels even those high standards with the cobbled together contraption passing as a ship in that opening story and the final page of the book’s closer. It’s not uncommon for a story to end with a large amount of people chasing Groo out of town, but Aragonés and Evanier work a variation on that with the numbers in the crowd promoted to phenomenal.

When Aragonés and Evanier revised Groo’s publication schedule to a single annual four chapter story they also included overt social and political commentary more frequently, but that wasn’t without precedent. The moral at each story’s end often has a pertinent point to make, as do three stories here. A side commentary about religious exploitation can be found in the second piece, and society’s attitude to the homeless is the explicit subject matter of the finale. It’s time that’s rendered the story between them as political commentary as it took over twenty years to manifest. When they produced a tale concerning building a wall around a village in 1989, Aragonés and Evanier obviously had no clue what a hot political talking point the idea would become from 2015 onward. In this case, though, the wall attracts people rather than repels them. It’s clever, as Groo doesn’t appear at all, but almost all his regular supporting players do. It should be noted that whatever point the writers want to make never overwhelms the primary purpose of a right good laugh, and all four stories provide those in quantity.

After fifteen collections with alphabetical titles these Groo reprints ended, Dark Horse picking up again with the stories they began publishing in 1999. The collections wouldn’t have stopped if they’d been making money, but enough Groo to fill a further eighteen volumes has never seen graphic novel publication, while the prices for used copies of what was collected are roughly $25. Surely time for a Groo Omnibus or two? One final comment is that now that the bigger superhero publishers just recycle a comic cover for their graphic novels, Aragonés creates a new wraparound cover for each Groo graphic novel. 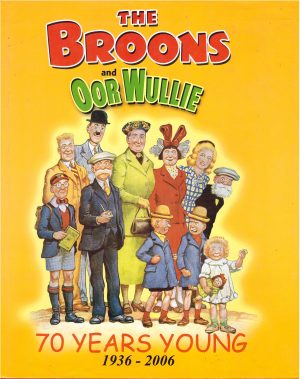