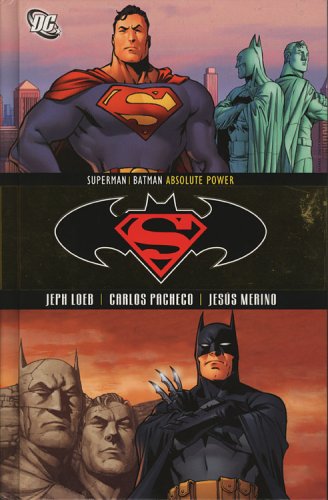 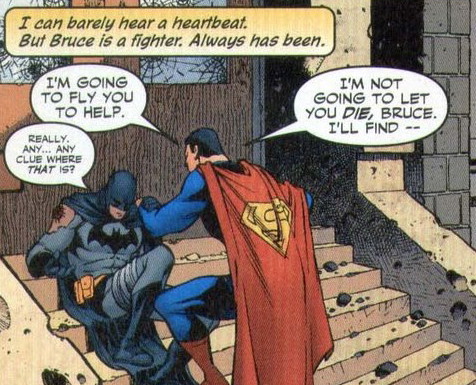 For many years Superman and Batman were the “World’s Finest” team: best friends who made perfect financial sense as DC’s most popular heroes cross-sold their combined readerships. Redefined for the 1980s, they became cautiously respectful co-workers doing the same job whilst deploring each other’s methods. A few years in this new status quo reversed. The irresistible lure of Cape & Cowl Capers inexorably bringing them together again with modern emotional intensity derived from their incontestably differing methods and characters for a series of epic adventures packed with high-value guest-stars as seen in Public Enemies and Supergirl.

Scripted by Jeph Loeb with beautiful art from Carlos Pacheco and Jesus Merino (with additional pencilling by Ivan Reis), this yarn revisits and resets the original team-up concept, seeing the most important heroes in the universe uniquely co-opted by a trio of menaces from a very familiar tomorrow.  Legion of Super-Villains Lightning Lord, Cosmic King and Saturn Queen quit the 31st century to insert themselves into the lives of Kal-El and Bruce Wayne as the most shocking and manipulative foster parents of all times. The manipulators are far from idle whilst raising the orphans, intercepting key events and ensuring Barry Allen, Arthur Curry, Hal Jordan and J’onn J’onzz all die before becoming Flash, Aquaman, Green Lantern and the Martian Manhunter. However, destiny is hard to thwart and other champions will always arise to restore the way reality should be, and Uncle Sam plans to set the world right once again.

Wearing the ring intended for Hal Jordan and liberating a team of Freedom Fighters (Phantom Lady, Dollman, the Ray and Human Bomb) from their overwritten new lives, Sam leads a bold counterattack against the oppressors. The tale supplies cameos from Kamandi, Last Boy on Earth, western gunfighters El Diablo, Bat Lash, Tomahawk, Scalphunter, Jonah Hex, Sgt Rock’s Easy Company and the Haunted Tank, immortal eco-terrorist Ra’s Al Ghul, Darkseid, the New Gods, Etrigan the Demon and an older wiser Superman. Assorted champions are apprised of the stakes in play and instructed in how only they can repair reality.

Although an engaging piece of fights ‘n’ tights fiction, this temporal tempest suffers from the most common ailment to afflict such time-warping sagas – you already knows it will be OK in the end. The art however is astounding, subtly augmented by Laura Martin’s colouring, it features of the prettiest cascades of chronal Armageddons you will ever see.

Although an aging fan-boy’s dream and featuring a vast amount of fondly familiar razzle-dazzle from scripter Loeb, this is something best enjoyed by dedicated fans equipped with the memories to keep it all straight.