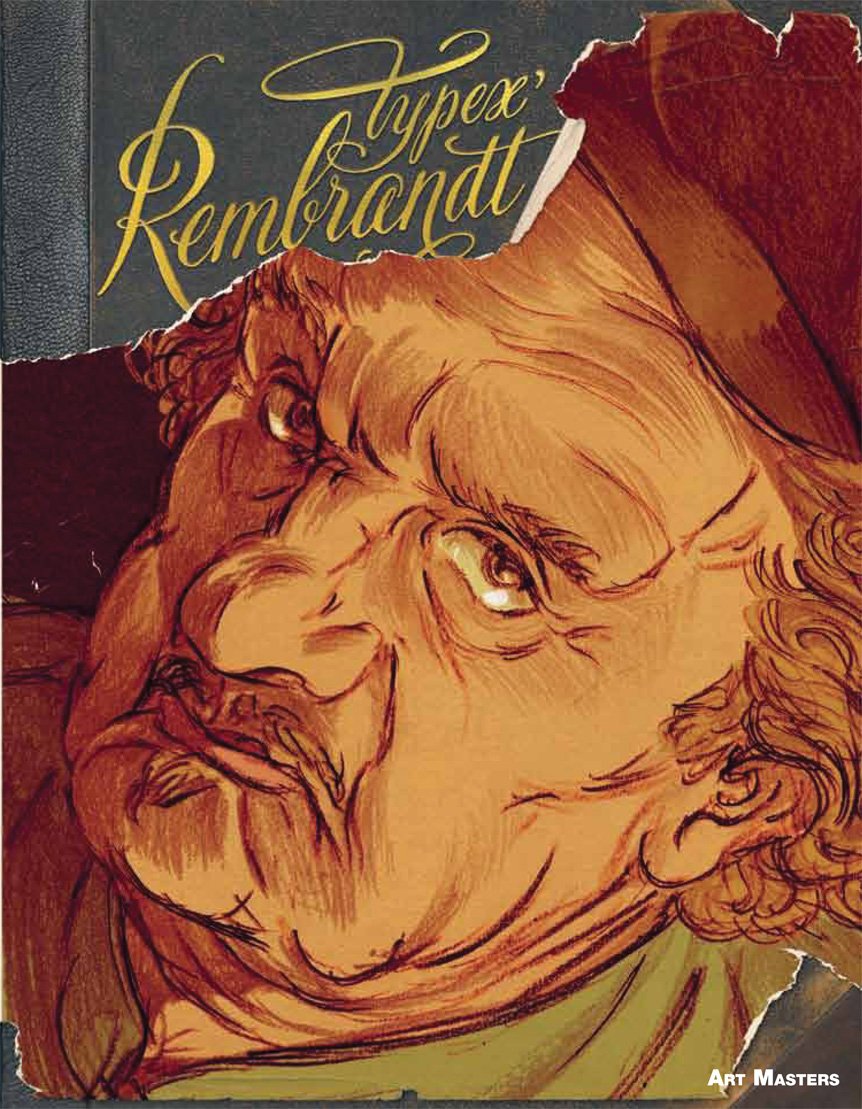 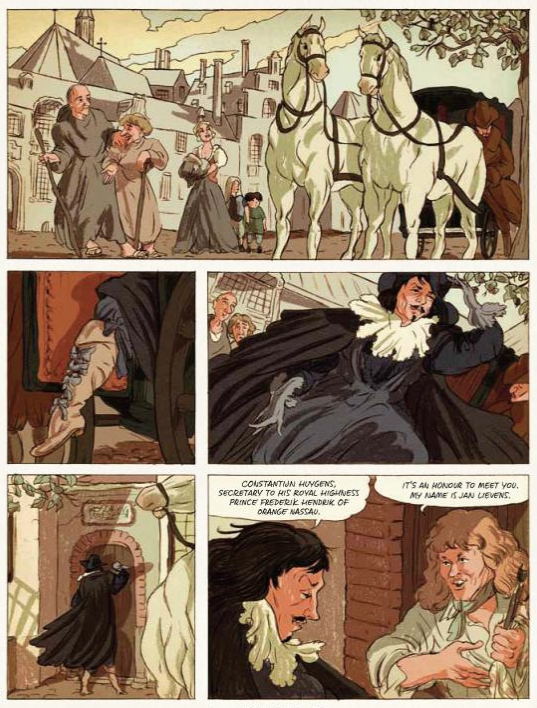 A 17th Century Elvis or David Beckham – Dutch artist Rembrandt van Rijn is a ripe subject for a biography. He was prodigiously and instinctively talented – at eighteen he had his own studio with wealthy customers queueing up for portraits. He was prolific, well rewarded, and adored by cognoscenti and common people alike. When he married a beautiful young heiress, he must have seemed to have it all, but there was trouble ahead. Like Elvis, he didn’t come from money, and poured it away on indulgences. He amassed a veritable museum of artefacts and curios, as seen in these pages. Who knew when he might need to paint a shark or crocodile? Best snap up these preserved specimens just in case!

This is all beautifully brought to life by Typex, aka Raymond Koot. He’s been drawing comics, children’s books and illustrations for decades, but this is his first book to make it into English. If the few images to be found on the web are any indication, it’s also a quantum leap from his previous work.

This English translation is the third volume in the Art Masters series from Self Made Hero, following Vincent, and Pablo. The elephant in the room for such projects is how do you represent the artist’s imagery, style and process? Pablo largely circumvented this, but Barbara Stok rendered Vincent’s iconic imagery of sunflowers and swirling skies into her charmingly simple ligne clair style. Typex trumps that with an impressive modern take on the old master’s style, and his trademark imagery – voluptuous women, lived-in faces, and so on. It’s visually arresting from the start, with the arrival in Amsterdam of an actual elephant. We see it brought ashore in a massive harness, hanging over a milling crowd of extras and a sketching Rembrandt.

The project was supported by the Dutch Foundation for Literature, and more significantly the Rijksmuseum (national museum of the Netherlands). A prefatory note from a curator there tells us that for three years Typex “lived, breathed and slept Rembrandt”, a cliché perhaps, but looking at these pages – easy to believe. Typex, rooted in comics’ line art tradition, was drawn to their collection of ink and pencil drawings – if you’re going to take on a master best do it on home ground. He’s got a fluid looseness on the figures, and the typically more hesitant lines coalescing, like his source’s, into architecture and landscapes. He goes head on with the paintings too – his take on magnum opus The Night Watch adds a buzzing energy to the somewhat stiffly posed figures of the original.

The colouring is a triumph. Typex plays down the yellow patina of the centuries, favouring a palette of burnt umber, raw sienna, arsenic green, alizarin crimson, and plenty of lush flesh tones. This could credibly be the colours of freshly painted Rembrandts.

Typex and friends powerfully evoke the world and characters around the artist, but there’s less insight to his inner world and creative process. Perhaps lacking sources like letters and journals, they’ve stuck to the officially documented: marriages, births and deaths, showing Rembrandt and family going through these key moments.

The back cover has an enthusiastic recommendation from writer/musician Nick Cave. It makes perfect sense – those who like Cave’s visceral modern take on Old Testament baroque will be at home here, what with the rats, plague, manslaughter, lust and creative excess.

SelfMadeHero’s next volume is on Edvard Munch – famous for The Scream. There are many similar volumes published in Europe, so the hope is to see more translated into English.