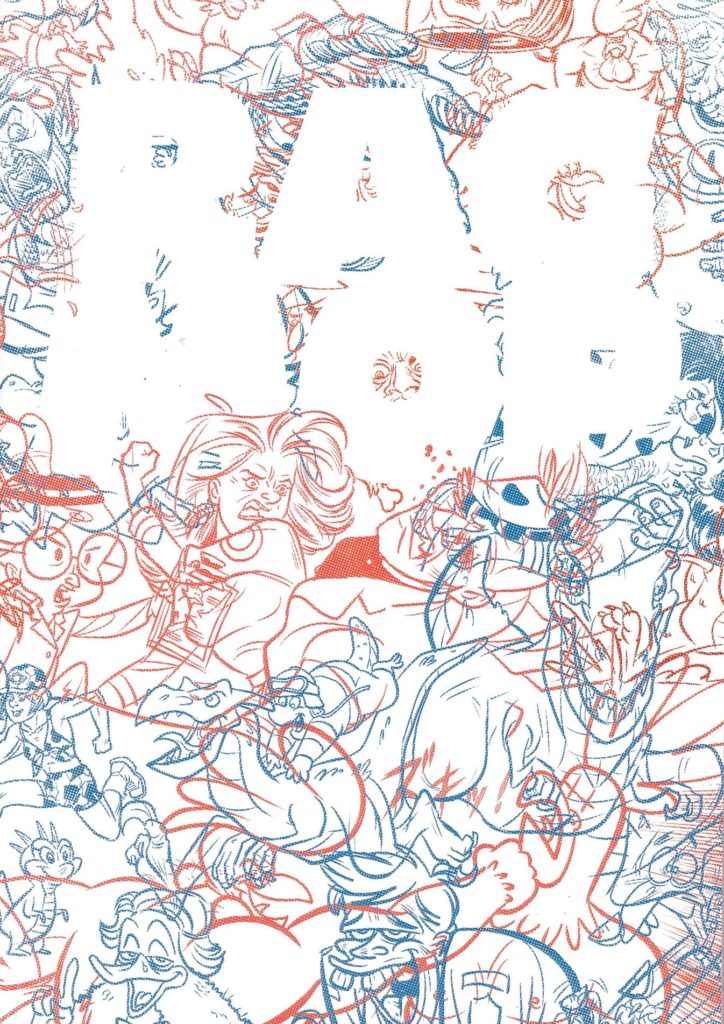 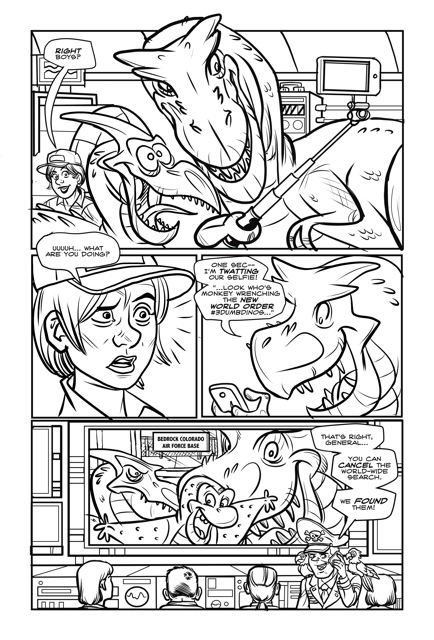 Rob Walton first serialised Ragmop in the 1990s, issuing a complete collection in 2006 that dazzled, and wasn’t just a reprint, but a re-working with additional pages. How many creators go to that extra effort? Read the review for further information, but following it up in any fashion was going to be challenging, yet Walton’s taken up that challenge to bless us with The World Needs Laughter.

We pick up with Alice Hawkins now in a bad way, but that’s just the teaser, as beyond a Kirbyesque scene setter Walton introduces the humour, mixing Chuck Jones with Charles Atlas and Don Martin to comment on hormone injected chicken while also satirising advertising. Then he introduces the idea that all the conspiracy theories we’ve heard about super-evolved reptiles taking over the Earth are true, and climate change is deliberate, to create the ideal environment for them. And how do corporations deal with any mess they’re responsible for? Well, the time-honoured tradition is to unleash something that’s potentially an even bigger problem. For this Walton recasts Ludwig Von Drake, cartoon host of Disney’s 1950s and 1960s educational TV programming, giving him the character of Werner Von Braun.

Artistically, the major difference is the progress of technology allowing Walton to experiment more. Many pages of his fine cartooning are present, but this is mixed with some figurative realism, the occasional photoshopped background, and the sparse use of colour, always to good effect for exaggeration.

To some extent this is a contracted re-run of Ragmop, the plot following the same basic beats, but while it makes perfect sense from beginning to end, that plot is largely irrelevant other than acting as the vehicle for Walton’s hyperactive imagination and wacky sense of humour. He again channels a childhood watching TV cartoons and reading comics. Will everyone pick up all the references and homages? Unlikely, but the adventure and comedy work independently. There’s no need to know anything about Popeye to appreciate the humour of a giant mutated brute of a chicken with a bulging eye and little white sailor’s hat.

A depth and complexity run alongside the hilarity despite there being far fewer pages to The World Needs Laughter. The main casualty of the shorter story is the limited political content. While there is room for someone commendable from recent US political history, Walton’s dealing with the evil of the Military/Industrial complex in broader strokes. It’s still very satisfying, frenetically hilarious, and extremely welcome, but it was never intended to match the density of volume one. This isn’t yet available from Amazon, so contact Walton directly via his Facebook page to order a copy.