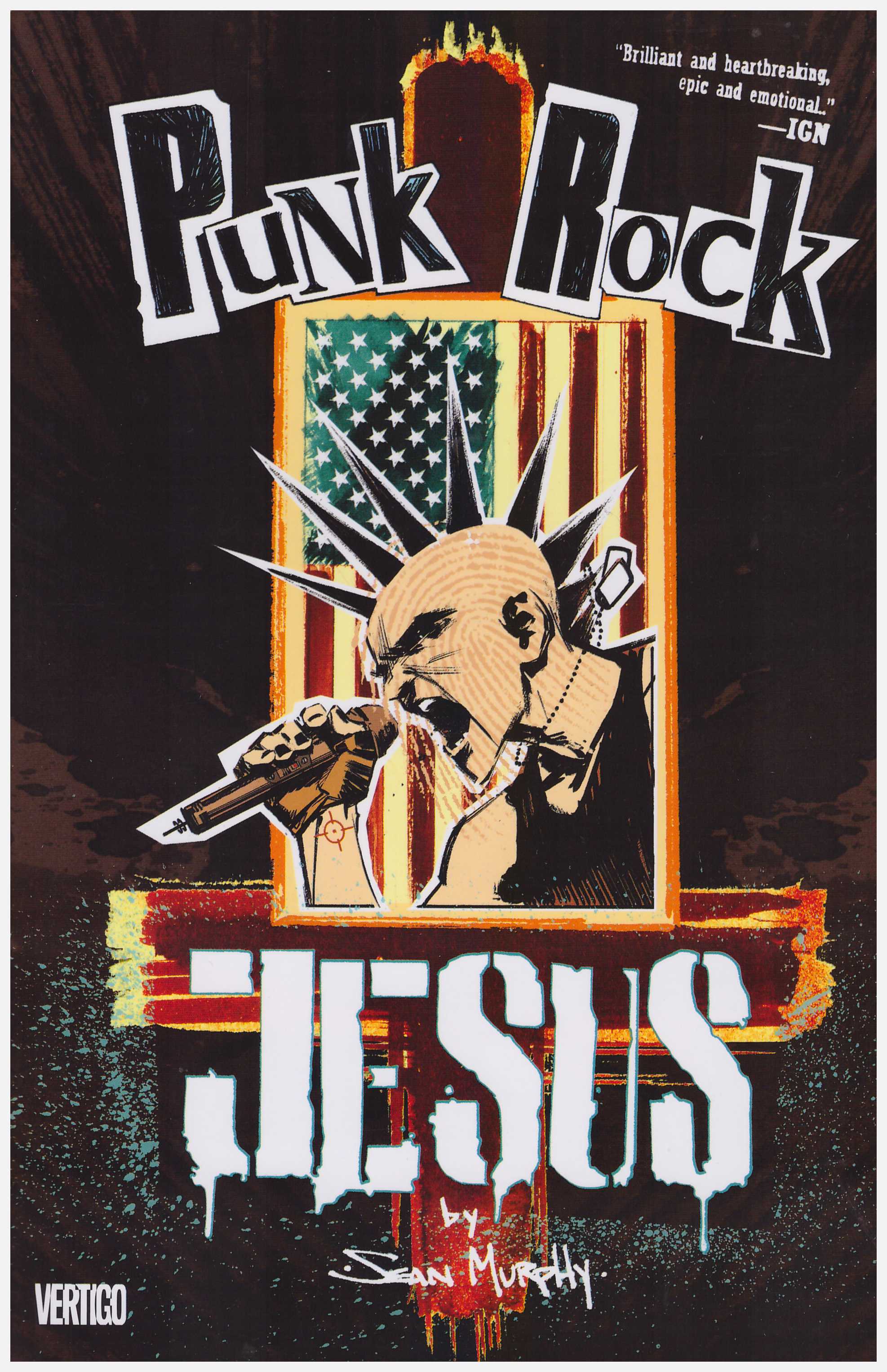 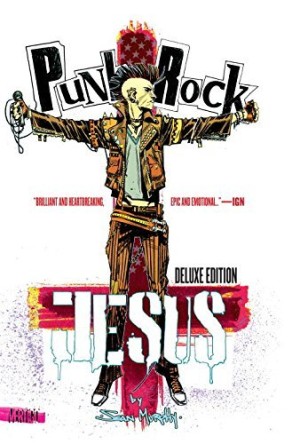 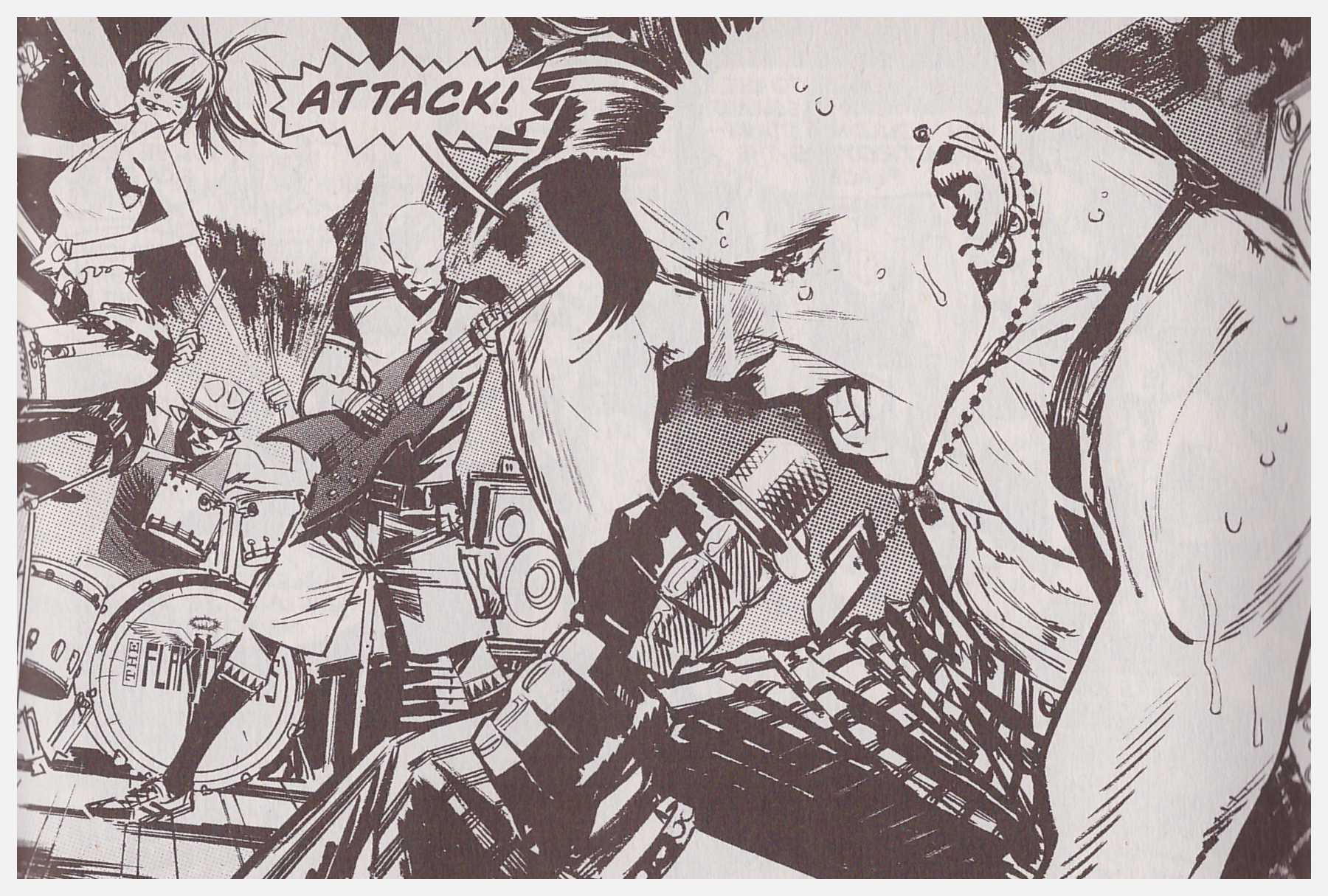 The first thing to be noted about Punk Rock Jesus is that it’s an astonishingly accomplished writing debut from Sean Murphy, in 2012 only known for his increasingly confident mastery of comic art.

His concept is provocative and brilliant. Why not clone Jesus? Setting the series a few years ahead of publication avoids awkward questions about the level of technology required, and also permits Murphy some fun with illustrating the near-future. With maximising revenue a priority, the prospective mother is selected via reality TV, and when born the new Jesus, or Chris as he’s cleverly named, is broadcast across subscription channels 24 hours a day. He’s raised in a privileged environment on a remote island with total security, and educated according to doctrine. Is it any wonder, then, that Chris throws it all in for rock’n’roll?

Under lesser hands Punk Rock Jesus might just be the tale of rebellion that it’s advertised as, but Murphy has bigger questions to pose, not least about the manipulation and hypocrisy accompanying much of what purports to follow the teachings of the original Jesus. He constantly surprises with his plotting, and his characters evolve throughout, from the starting point of a multi-layered supporting cast.

Larger than life describes repentant head of security Tom McKael, one time IRA killer, whose background becomes a counterpoint throughout as it’s slowly unconcealed. Geneticist Sarah Epstein’s scientific curiosity overcomes most ethical scruples, and Gwen, Chris’ mother undergoes a distressing transformation from wide-eyed innocent compliance to suicide blonde. Rebekah Epstein grows up alongside Chris and is ultimately the only person who can influence him. Devious TV exec Slate is the single character that starts and ends the series not having developed an iota, perhaps a comment in itself.

Chris undertakes the most radical transformation, absorbing what’s being kept from him, and learning from his first failed rebellion how to ensure a second succeeds. Needless to say, there are none of the desperately hoped-for miracles, at least not beyond contrivance, and Murphy is exceptional at conveying the dismay and confusion of the young Chris.

Murphy’s art was already highly fêted, and given his own project he wasn’t ever likely to disappoint. He’s studied Chris Bachalo’s early work, and his layouts maximise excitement, leaving his action scenes jumping off the page in glorious monochrome. If a few too many characters appear soused from an excess of lines across the nose, it’s only a minor flaw, and memorable images or sequences run into to the dozens.

While extraordinary, Murphy falters just before the final hurdle. The book ends in very biblical manner with revelations, although these make sense, and a slight leap into the future for some consequences, but before that Chris’ development, until then so believable, has come shuddering to a halt. He’s the dark mirror image of what his mother was when only slightly older.

Then there’s the problematical question of punk rock. It’s right up there in the title, and it makes for some arresting imagery, but would someone with Chris’ intelligence, capabilities and stated intentions really decide that punk is the arterial medium for conveying his message? Any amount of superhero comics posit similar lapses of logic, but Murphy has crafted his story so convincingly to this point that it’s jarring. Conversely, Punk Rock Jesus is such a dense read that disagreement about the path a character takes shouldn’t overly impact on enjoyment of the remainder.

Murphy has delivered an indelible stamp, and following his progress over the next few years should be a joy.