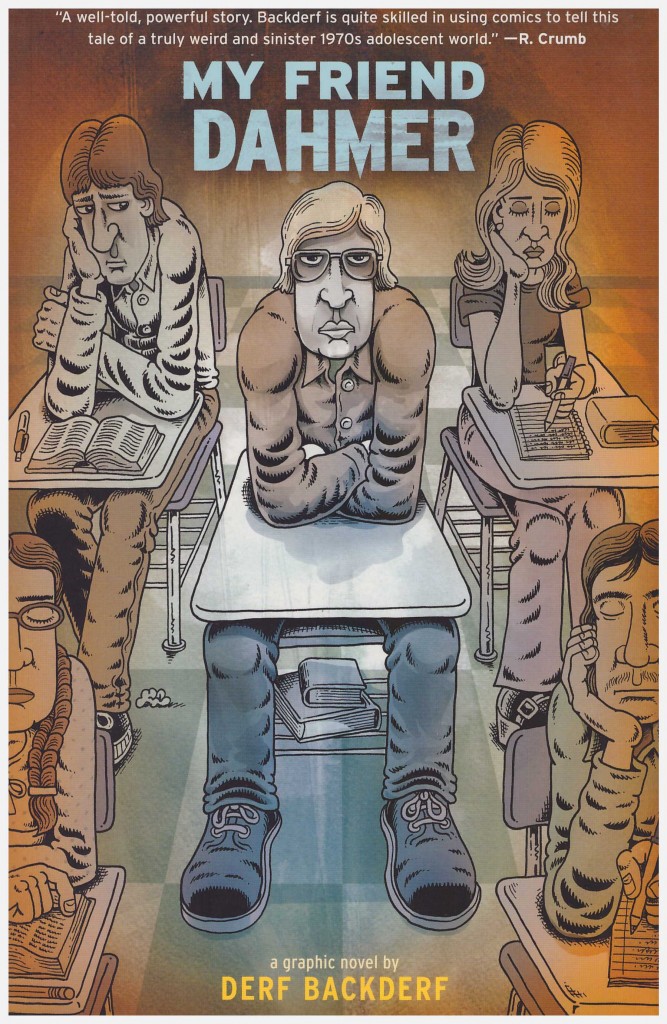 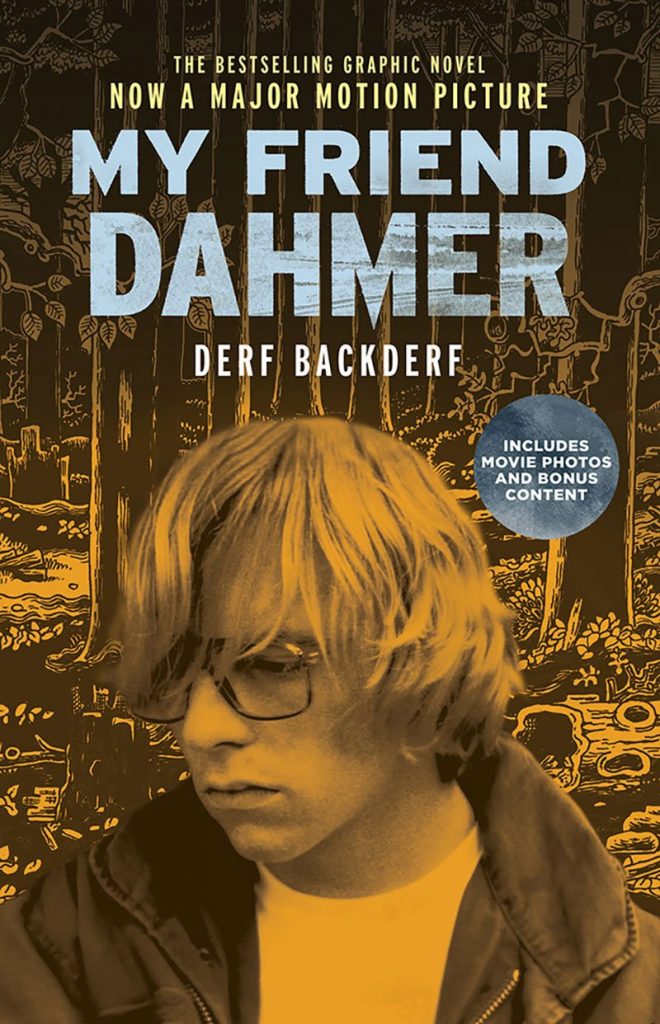 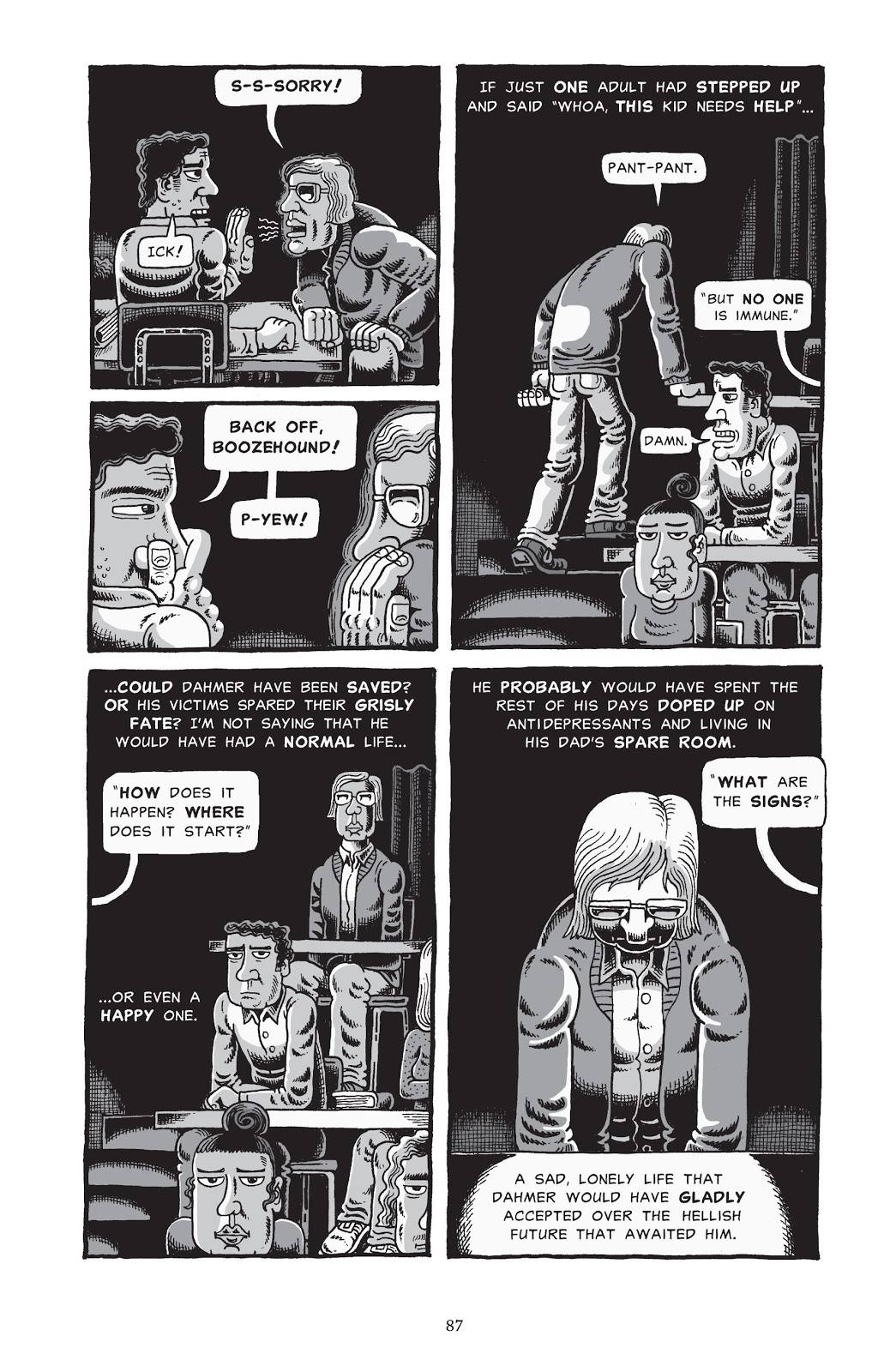 John Backderf produces his cartoon strips as Derf, yet for his first outing from a major publisher he’s cover-credited as Derf Backderf. However he chooses to be credited, it’s surely the case that Derf is the only cartoonist to have numbered a notorious serial killer among his classmates.

Jeffrey Dahmer’s grisly secrets were revealed in 1991, thirteen years after his high school friendship with Backderf, and Backderf first published a story about Dahmer in 1997, three years after his murder in jail. This led to a self-published comic, vastly expanded for this book.

The Dahmer introduced here aged thireen is already the class outcast, a target for school thugs and with a profoundly unhappy home life. He curries favour with school mates by acting as if he has cerebral palsy, and by sixteen is accompanied to school by a bottle of spirits. Backderf lays out Dahmer’s isolation, school acceptance dependent on demeaning himself, and that only among other outcasts. An ironic ‘Dahmer Fan Club’ is formed, and money raised to have him perform his cerebral palsy act in public. On the short drive to the mall Dahmer chugs six cans of beer. Backderf isolates this as the moment he realised Dahmer wasn’t just odd, but truly scary.

One undercurrent of this narrative is the adult Derf looking back and wondering how his teenage counterpart can have missed the signs, oddly never realising the answer. No-one ever expects someone they know will become a serial killer. The other undercurrent is that for several years Dahmer forged a tormented and drunken life through school, repressing his sexuality. These signs were obvious, yet not a single responsible adult appears to have cared enough to attempt any intervention. Backderf doesn’t ask the question, but it occurs to wonder how many deaths might have been prevented by some adult compassion in 1975-1978. The portrayal here is of a desperately unhappy young man lacking a shoulder to cry on.

Perhaps the art won’t be to all tastes. Backderf merges the underground comics style of his youth with Don Martin, delivering the creepiness required, but there’s still a naïve crudity. This can detract from the storytelling, which is a strength. The evocation of the mid-1970s, now a different country, is telling. It contextualises Dahmer’s development amid Styx and Kansas as style role models for the hip kids, while suburbia was swathed in nylon, pine and choppers.

The original comic version of this story held a visceral freshness as it was purely based on recollection, but this revision incorporates research and interviews to nail timelines. Backderf includes extensive commentary and notes, and ends with a telling coda. When his journalist wife phones to tell him of a breaking news story of serial killer once in his class, Dahmer is only his second guess. Now that’s frightening.

In 2017 a movie resulted from Derf’s recollections, generally well received and starring Ross Lynch as Dahmer.