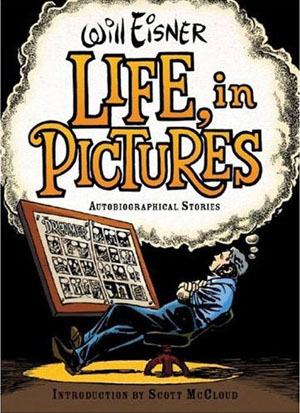 The gathering of Will Eisner’s graphic novels in three for one packages continued by grouping his autobiographical material together, although stretches the point to include the Eisner Award winning The Name of the Game. This is a scathing fictionalised account of his wife’s family, their prejudice and emphasis on maintaining the family name no matter the human cost.

That, The Dreamer and To the Heart of the Storm are reviewed in greater detail as individual volumes, but all are prime slabs from one of the greatest creators of his generation, an artist who remained contemporary and vital for over fifty years.

This also includes some less familiar material. ‘The Day I Became a Professional’ was originally commissioned for the Dark Horse anthology AutobioGraphix. At four pages it’s a slim tale but makes its point in delivering the lesson that talent isn’t enough unless allied with persistence. It begins with a young Eisner preparing his portfolio under the watchful eye of his proud father about to show his samples to his first art editor. Disappointed at his rejection, he meets children’s author Ludwig Bemelmans. It’s a charming recollection, and can be seen as the prelude to the first anecdote related in The Dreamer.

A Sunset in Sunshine City’ can alternately be found in The Will Eisner Reader, originally seeing print in a 1985 issue of Will Eisner’s Quarterly. It’s only autobiographical in the manner in which Eisner has incorporated his own conflicted feelings on leaving New York after decades to relocate to Florida, and it’s this portion of the story that’s the strongest. Before leaving, the lead character Henry Klop wanders the neighbourhood with various ordinary constituents sparking memories: there’s the drain into which his wife’s wedding ring fell, and the lamppost at which his daughters waited to greet him when he returned from work.

Eisner skilfully stresses that Klop was no angel in his youth before introducing the wastepail boyfriend of his daughter Rita. In his later work Eisner often exaggerated the sleazebags in his stories, and they’re the weaker for it. That said, there’s enough charm and grace to see the story through.

Available at a price considerably cheaper than the sum of the individual volumes, Life, in Pictures also comes with an erudite introduction from Scott McCloud.