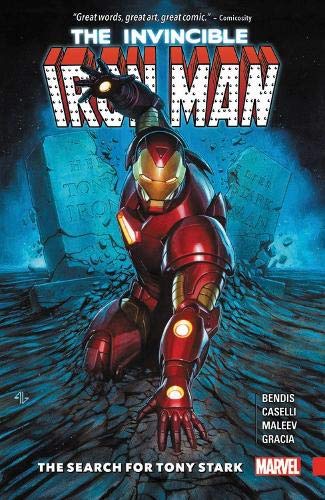 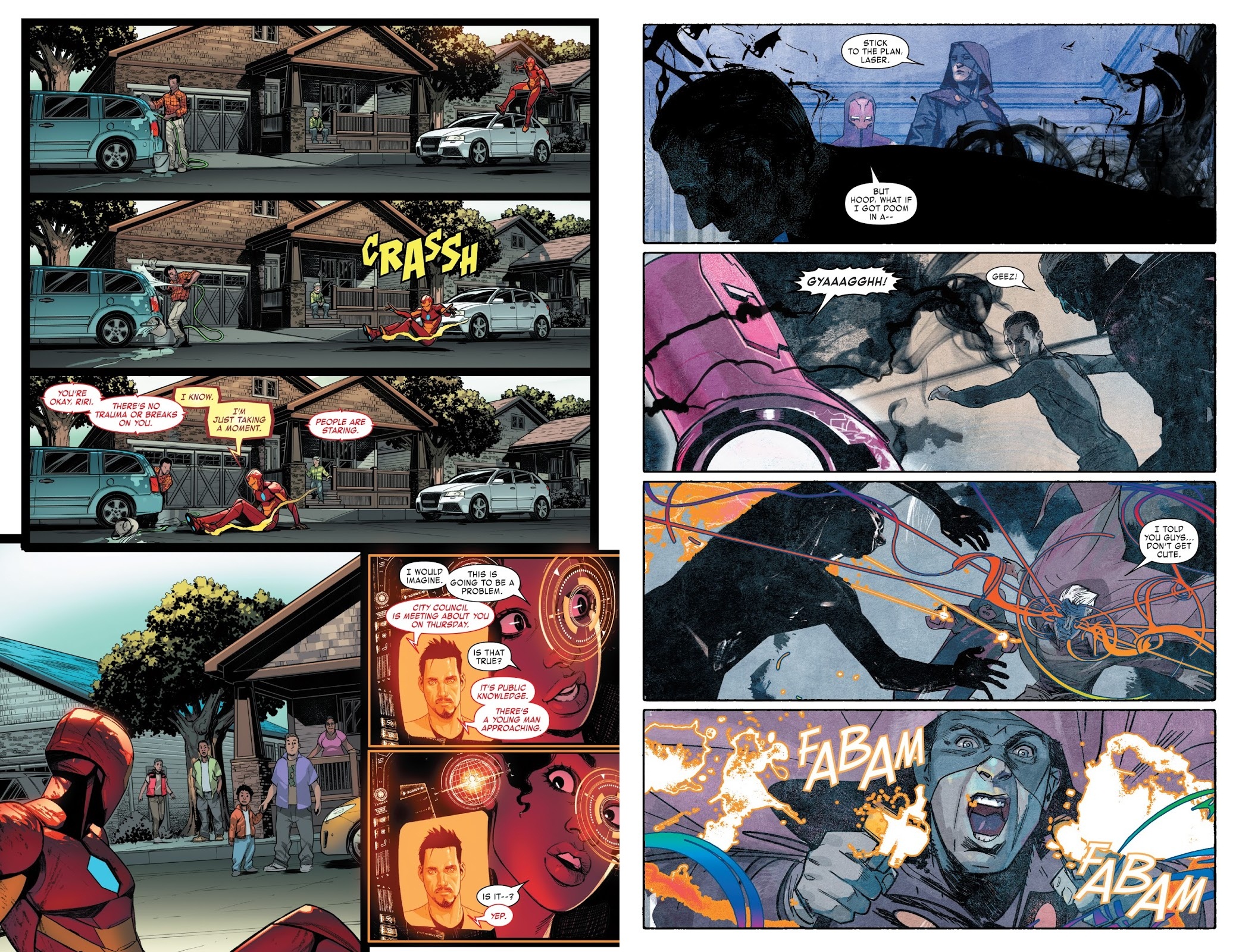 Brian Michael Bendis has taken a long-term and structurally ambitious approach to Iron Man. It started with a look back at Tony Stark’s youth in International Iron Man, continuing with a conventional reboot in Reboot. Tony Stark then went missing, to be replaced with two substitutes, Riri Williams and Doctor Doom, respectively in Ironheart and Infamous Iron Man. The Search for Tony Stark brings Bendis’ plots to a close.

He begins with a little joke, disclosing exactly where Stark is and why, although that quickly becomes more complicated, before introducing four main plot strands. A conniving executive is attempting to take control of Stark International, there’s a search for Tony Stark as per the title, a bunch of villains are chasing Doom down and every now and then the plot jumps back to Stark himself and his internal discussions and fantasies. The thematic thread is presenting two men used to absolute control and with complete confidence in their abilities having that stripped away from them. While entertaining enough, the plot threads individually don’t connect for some considerable time, until in the final third they coalesce into what the title’s told us all along.

Visually this isn’t a graceful looking book, as disjointed as the story. There’s nothing wrong with the individual styles of Stefano Caselli and Alex Maleev until they’re forced into alternating pages of the same story, when Caselli’s more naturalistic approach on the majority of pages clashes with Maleev’s stylised methods on pages featuring Doom. For the finale many other artists become involved in a chapter structured to incorporate pin-up pages showing them at their best. David Marquez, Daniel Acuña, Leinil Francis Yu, Jim Cheung, Mike Deodato, Mark Bagley and Andrea Sorrentino contribute and rise to the occasion.

Bendis’ writing style has become more and more leisurely over the years, and at times here there’s too great a concentration on the cast at the expense of any plot. For some readers that will be fine, as the enjoyment he invests in the journey means as much as the resolution, while others may consider there’s too much padding along the way. Everyone should agree that the Thor joke is a magnificent piece of writing, but Leonardo Da Vinci may be a large leap to anyone who hasn’t read Jonathan Hickman’s S.H.I.E.L.D. story. One revelation in the penultimate chapter is cheesy, melodramatic manipulation, never properly explained and eventually of little relevance, but that’s countered by a good finale to Doom’s story, although elements of that have never really convinced either. Bendis has bequeathed a decent situation to someone else, though.

The Search for Tony Stark is Bendis’ work on Iron Man in microcosm. A lot of clever elements accompany a story that seems padded with dead ends to ensure the finale occurs in what was Iron Man’s 600th issue overall. On balance there’s more that’s good than not, but it could have been better. 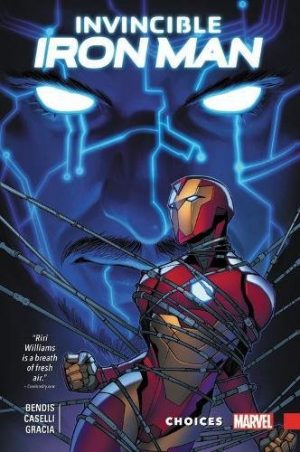