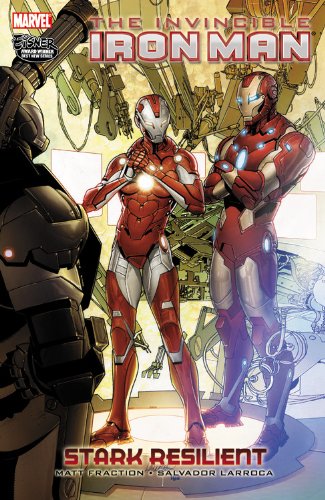 There was rather a dearth of Iron Man in Stark Resilient volume one. Well, that’s rectified here as the new armour and all its wonders receives quite the extensive test run.

The previous volume established the ambition of Hammer Industries to take over the military hardware contracts vacated by the now recovered Tony Stark, who’s instead concentrating his energies on manufacturing a fuel-efficient car. There is something decidedly suspect about Hammer, though, and Stark links a threat with an earlier attack.

This leads into what is possibly the weirdest Iron Man battle produced to date. As displayed, excellently as usual by Salvador Larroca, it’s two people flinging energy at each other, but the seductive set-up is brilliantly pitched, and the technology behind the conflict is equally astonishing.

Matt Fraction has toyed with elements of extrapolating present day technology in the series to date, but nowhere near as completely, and frighteningly, as in Stark Resilient. In one sequence Iron Man is attacked by a succession of deadly drones controlled via phone ap by a bunch of eager geeks who believe they’re beta-testing a pre-release flight simulation game. That’s some great imagination, and nothing that’s ever been seen in a comic before. Given the nature of the threat, Larroca responds with some stunning visuals deliberately designed to resemble screen shots from a video game

There’s an awful lot of foreplay both here and in the previous book, but when Hammer’s Detroit Steel armour and Iron Man finally clash it’s stunning.

There are also two bonus sequences nicely illustrated by Jamie McKelvie. The better of them hones in on Pepper Potts at a point where she needs to consider her life and relationship with Tony Stark, and this occurs via the subconscious manifestation of her now dead husband. The other is a more trivial wordless tale detailing 24 hours in Stark’s life.

The Invincible Iron Man Omnibus volume two collects this book in hardback along with its predecessor and Stark Disassembled. The continuity continues in My Monsters.