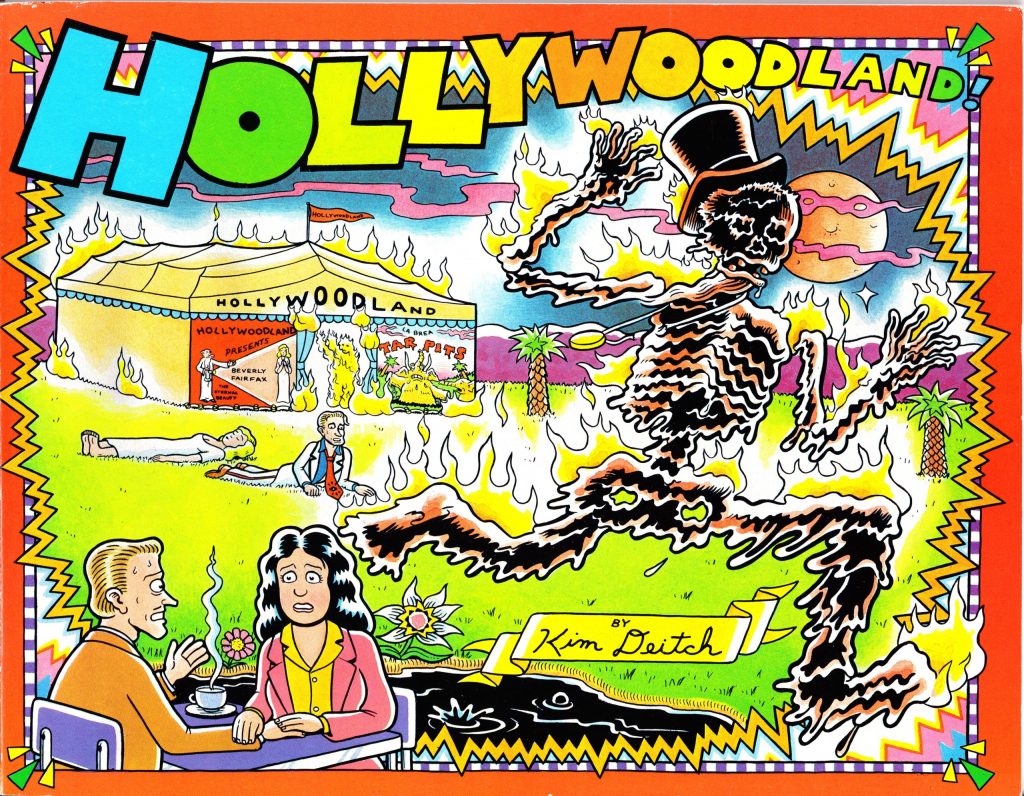 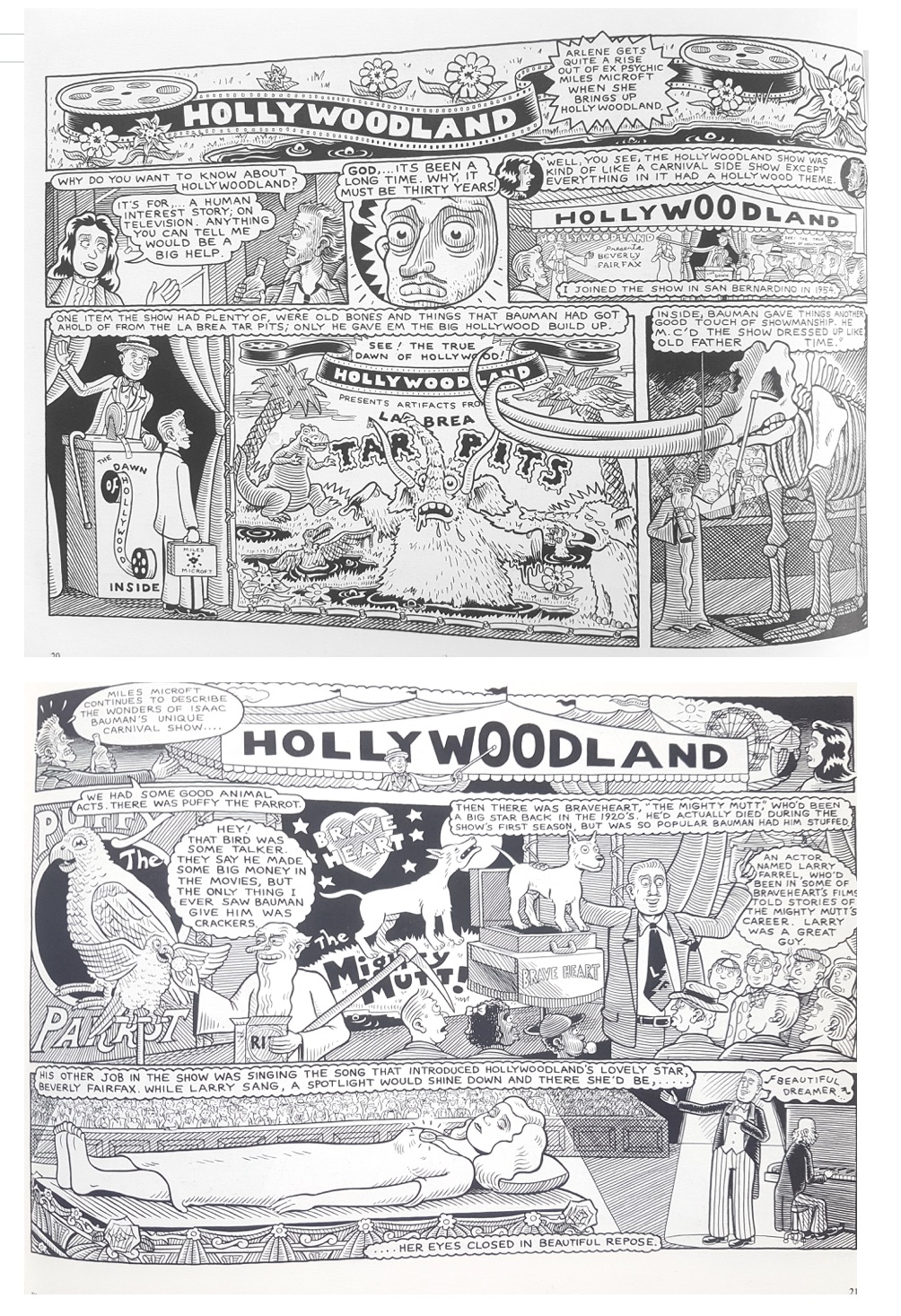 Hollywoodland is both a fictional tourist attraction, and an apt title for this multi-character novella of generations of local personalities connected by the titular attraction.

Deitch was a key figure in the 1960s American underground comix movement, though he never entirely fitted, pursuing personal content beyond the staples of sex, drugs and anti-establishment politics. Moreover, Deitch’s art didn’t come to fruition until the mid-1970s, when the ‘underground’ comix phenomenon petered out. One of the few remaining potential outlets was alternative newspapers, and Hollywoodland, with it’s recognisably local setting, and fascination with cinematic legends, found a fitting home in L.A. Weekly. It was serialised in half-tabloid pages, then gathered in this landscape format collection. Today, it seems slim at sixty pages, though that was typical of the first wave of trade paperback ‘graphic novels’.

Hollywoodland opens with has-been actor Larry Farrell, as he strolls and croons round his usual circuit of Boulevards and Avenues. As he goes, he attracts a motley collection of local denizens: first urban youth Sammy, who trails him on roller-skates, while reporting through his boombox radio to memorabilia trader Alonzo; then a “wild-eyed” drinker, who turns out to be Miles Mycroft, Psychic Detective; next Dr Isaac Bauman an old pal of Larry’s who invites him to check into his “one-patient sanitarium”; finally, and driving the action is Arlene, a TV reporter, chasing a story she hopes will save her career.

Deitch plunders the films he loves, and which we’ll never see: 1920s B-movies, and serials rotting on their celluloid. Bauman was the owner of the eponymous Hollywoodland, and married to black and white era starlet Beverly Fairfax. Beverly is an apt emblem of Hollywood, her stage name referencing local thoroughfares, and her inanimate ageless state embodying the lifespan challenge for leading ladies. This is later revealed to be of magical origin: a kind of Faustian pact, not for knowledge, but for enduring beauty. This slim book is bursting with vivid details, dizzying turns, and esoteric twists. The characters are archetypes: Bauman as Alchemist, Alonzo as Guardian, and Arlene as Entrepreneur, yet Deitch breathes quirky life into this motley band of losers and dreamers. The plot is fanciful, involving magic amulets, secret levers releasing hidden riches, and ever more improbable stories within stories, building, as it must to a pyrotechnic climax, and positive denouement.

From the cheap seats these pages may look like shoddy sideshow souvenirs, but those in the VIP area will appreciate Deitch’s artistry. He discards humdrum realism in favour of elegant artifice. Just look at the (lower) featured page where he creates depth-of-field by varying the weight and spacing of his feathering, and modulates tones, to make the recumbent Beverly positively luminous. And just look at the fond detailing of the flowered dais. Twin spotlights ensure focus and create the effect of two panels in one. The figures are reduced to essentials as Larry’s hammy showmanship plays to the gallery. The mastheads are also a delight – each is joyfully unique, and elegantly catches-up latecomers. Deitch choreographs every element like a savant director from the dawning golden age of Hollywood.

Deitch, in a mere year’s worth of weekly pages, takes us on enchanting tour through the shadowy corners of showbiz lore, and the love just shines off these pages. An illuminating afterword, shares the story of the book’s creation, and it’s roots in various real-life characters Deitch met during his own time in Hollywood. His next book was the similarly serialised A Shroud for Waldo, though he’d soon return to his Hollywood heritage in Boulevard of Broken Dreams.