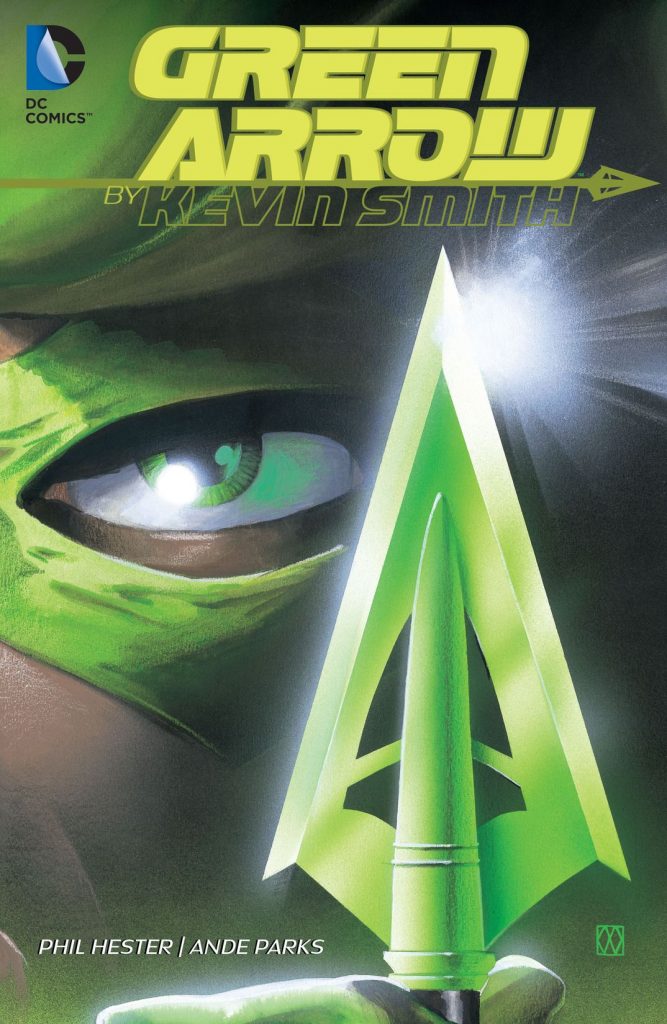 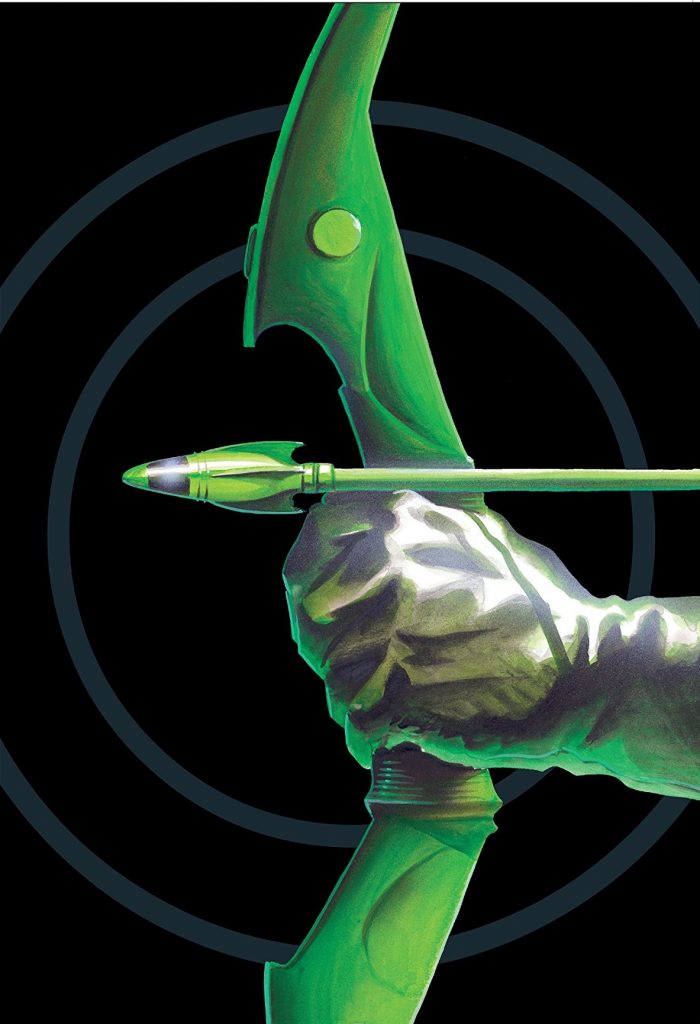 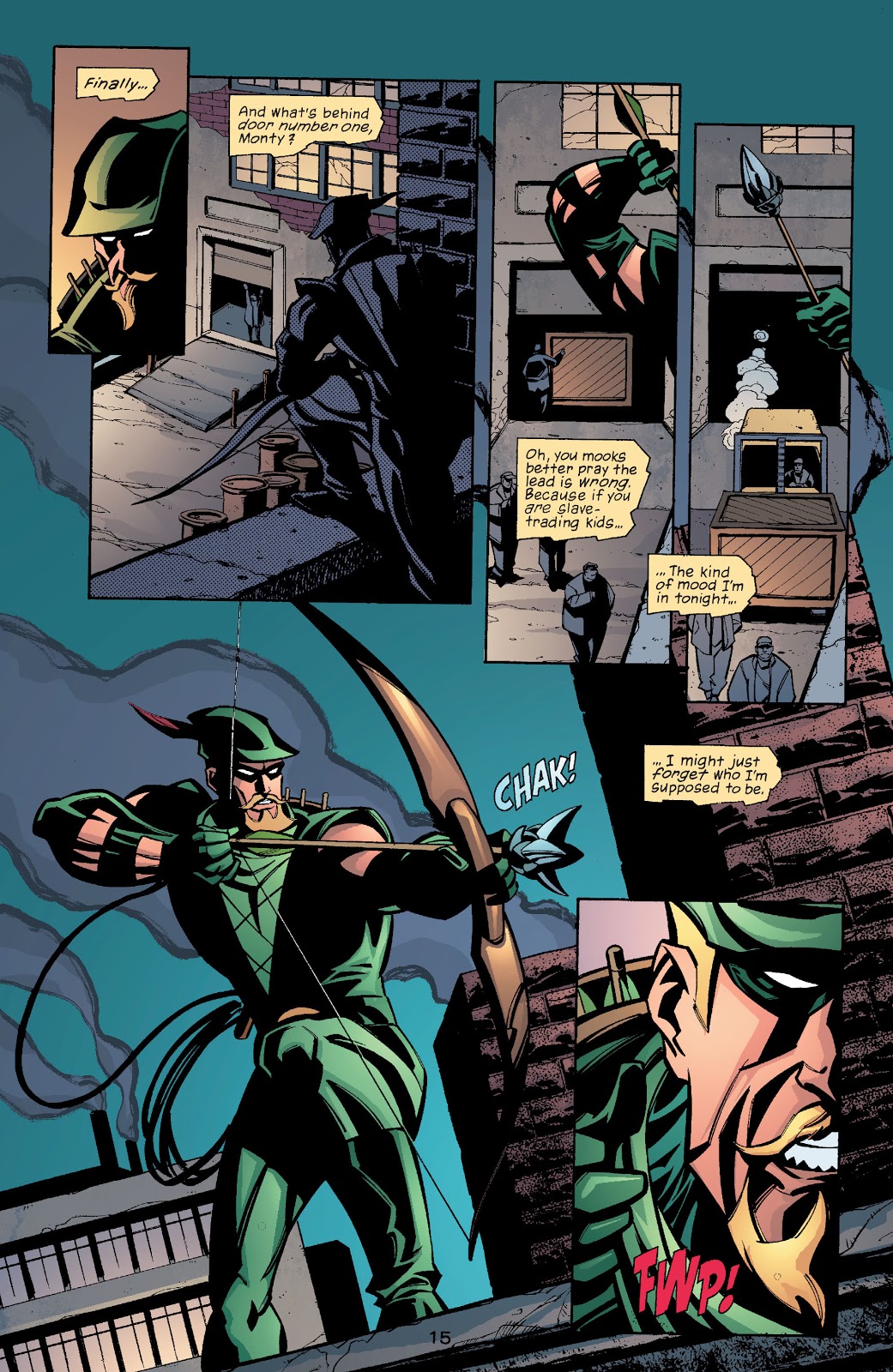 No, you’re not going to see page after page of Kevin Smith artwork. He wrote these stories, but every single one of them is very nicely drawn by Phil Hester. The minute cover credit would be disrespectful even if the drawing was poor, but it’s a very important part of the package, Hester’s jagged cartooning a novel step away from the standard look of superhero comics at the turn of the century. It was a signifier that something different was going on, and now has a timeless noir quality.

Back in 2001 when this Green Arrow material was first published as comics Kevin Smith was a writer still excited by the opportunity to transfer his talents from film, and this was a big project, the mission being to restore Oliver Queen from death and rebuild his world. Smith does this with good humour, includes the substitute Green Arrow Connor Queen rather than sidelining him, features Black Canary well throughout, and broadens Oliver’s world with the introduction of two new characters. Mia Dearden is rescued from a life of abuse and exploitation, and Stanley Dover is a rich old man given a new lease of life by meeting Oliver.

When last seen before this work, Oliver Queen died in order to let Connor take over the Green Arrow role. It was a suitably heroic death, and seemingly definitive. Smith just returns him without any explanation, and stretches out the mystery tantalisingly and amid some good jokes. Oliver doesn’t know he’s been dead, and in fact doesn’t remember much since his 1970s tour of the USA in the company of Hal Jordan. “Dead? Nope…”, he responds to one white collar criminal, “Just been on the road seeing what a blight power-hungry baby-kissers like yourself have made of America”. Over ten chapters Smith meticulously pieces together what’s happened amid reunions, reconciliations and a lot of really good dialogue. The solution to the mystery is nicely conceived, making good use of a more controversial transformation of the era, and other aspects of the DC universe manifest as Smith flows in one character after another. His Batman and Superman are good, the rhyming dialogue for the Demon excellent, and two encounters with Hawkman are especially well conceived.

While definitely a quality read, not everything works. Smith frequently gets carried away with the dialogue, causing the word balloons to overflow, and a jarring switch of tone and a chapter moving the focus from Green Arrow to set it up doesn’t fit overall. The worst intrusion is a villain who repeats sound effects. It’s a concept that only works on the printed page, and then only for the small amount of time it takes to make the connection and think about it logically, after which the surreality shreds any credibility the assassin has, no matter what he does. Packaged alongside the remainder of Smith and Hester’s work, however, Onomatopoeia’s presence is only intrusive as a minor blip at the end of what has otherwise been a still thoroughly entertaining selection of stories.

This same content is also available as the oversized hardcover Absolute Green Arrow, or split over two paperbacks titled Quiver and Sounds of Violence.