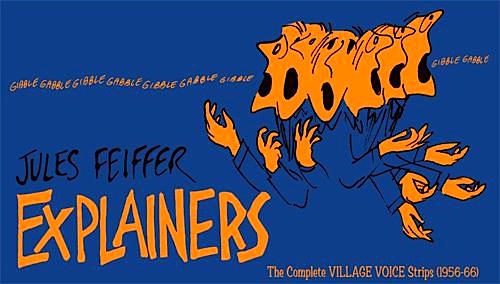 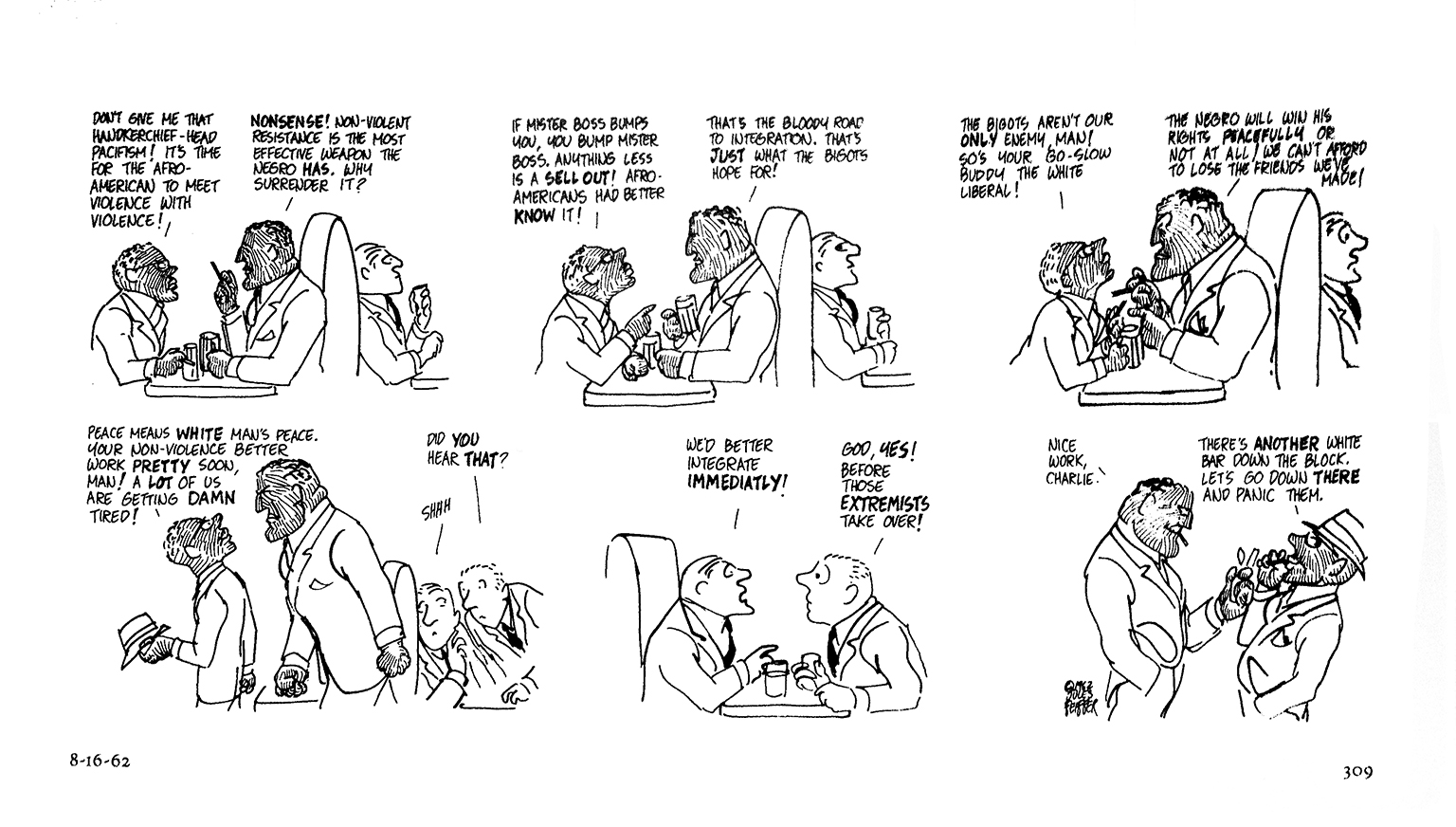 Explainers is a landscape format hardcover book, reprinting in date order every one of the strips made by Jules Feiffer and published in the Village Voice, New York between 1956 and 1966, and in The Observer, a Sunday newspaper in the UK. Some of these strips were also published in Feiffer’s first book collection, Sick, Sick, Sick (1959) and his second, The Explainers (1961), reconfigured for a standard upright paperback format, but they have never been systematically reprinted before.

Editor of the collection Gary Groth supplies a detailed intro that describes the context of the late 1950s and the strip’s beginnings, including many quotes from Feiffer himself about his objectives, and how he arrived at the unique combination of political and psychological satire that became his distinctive style.

Feiffer’s cartoons put the people of New York under a microscope and examined their fears and neuroses, their desires and obsessions in monologues and conversations that unfolded like tiny playlets. The protagonists were all recognisable ‘types’ of men and women talking about their relationships with each other, arguing about political ideas, social constructions, sexual situations, cultural and racial problems, trying to justify themselves in psychoanalytic terms, trying to convince others of the rightness of their beliefs, or desperately commenting on their own shortcomings in unexpectedly hilarious ways.

Feiffer’s drawing emphasised movement and postures, revealing character through observation of body language in scribbled lines that did just enough to describe a personality. The minimal but highly expressive drawings float in white space, anchored by the clouds of words that spill out of their busy mouths. His layouts have no backgrounds, no panels or panel borders, which focuses all the attention on the people and what they are saying, taking it for granted that you will know the kinds of places they go, and what their circumstances are likely to be.

Nobody was presenting work like this in newspapers at the time. “What really made the break was when the Observer in London picked me up, thereby blowing away the conventional wisdom that my stuff could only work in the Village. I was actually far more popular in England at the time. I became a craze over there, the way I wasn’t yet over here.” Feiffer changed the idea of what newspaper cartooning could be, especially when he combined his caricatures of people with political commentary to criticise Presidents, civil rights, the military/industrial complex, Vietnam, and television’s role in pacifying the nation. In 1986, he received a Pulitzer Prize for political cartooning.

This collection of his first of four decades of strips has dated far less than you’d expect outside of the obvious topical references to Presidents Nixon, Johnson, and 1960s pop culture. It’s a huge book, but read a few at a time and they’ll slip by so easily you’ll barely feel them sting.