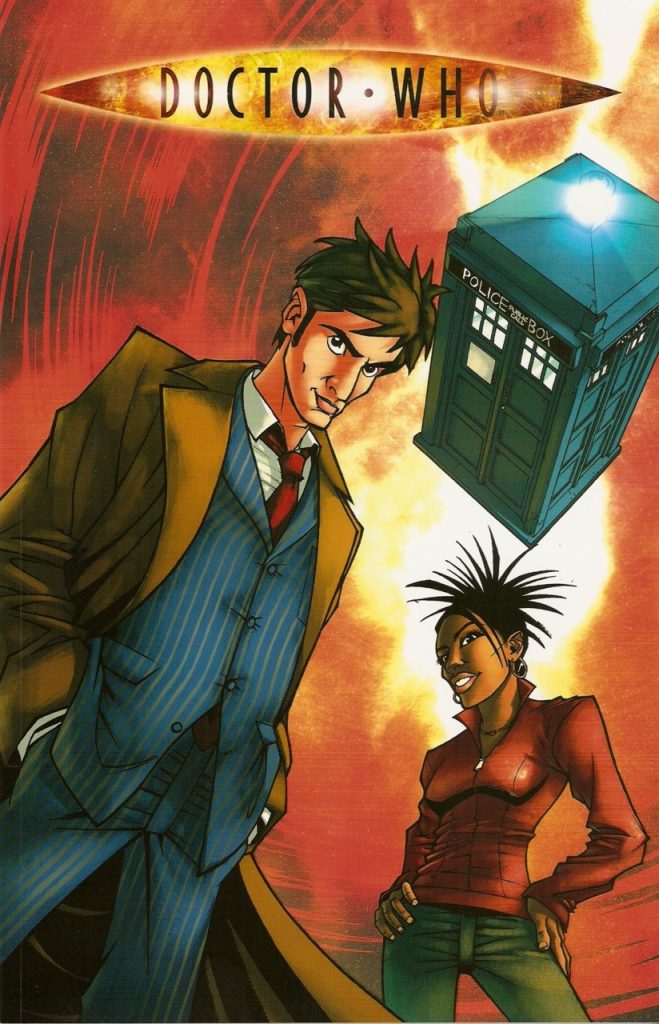 Agent Provocateur was a landmark when published as comics, being the first Doctor Who material commissioned for the US market. Rather than employ an American writer, IDW went for the safe hands of Gary Russell, once editor of Doctor Who Magazine, and with many Doctor Who novels under his belt. Bets were hedged via a concise single page synopsis starting the story explaining who the Doctor is, and the background of Gallifrey and the Time Lords, just in case someone unfamiliar with the Doctor and his world picks this up.

There’s a professional tidiness to Russell’s plots, as he provides single chapter adventures during which the bigger threat gradually manifests. It’s clever. In the opening story the threat is an alien gathering the last surviving member of different species, but with no real indication that what happened to their races becomes the overall plot. As the Doctor investigates people turned into sand we see the entire population of planets disappearing, and a trip to a world of humanised cats ties in also.

Detail and busy movement characterises Nick Roche’s cartooning, but what first catches is the eye is the manic, gurning expressions he so frequently gives the Doctor and Martha Jones. Comedy moments have been integral to Doctor Who over the years, and David Tennant’s interpretation thrived on a sardonic responses to threats, but Roche tips the cast into pantomime and was the wrong choice. Jose Maria Beroy and Sefano Martino (sample art left) continue the style while toning down the exaggeration for a more acceptable balance, with Martino’s final chapter spreads hitting the spot. Mirco Pierfederici (sample art right) is very much the contrast by opting for a form of naturalism instead. A few odd faces betray a talented artist at the start of his career, but his is the style that works best on what are essentially serious science fiction adventure plots with a few jokes rather than comedy with a few thrills.

Russell’s good at leading us into believing one thing (along with the Doctor) when something else is actually the case, good at presenting the Doctor and Martha as per their TV personalities, and good at those moments where the Doctor reveals he’s actually completely on top of things. At the halfway point Russell shifts gears to focus on the primary plot, which escalates matters to saving the entire universe, with a nice complication thrown in.

Agent Provocateur is an ambitious plot that plays out well, with both the scope and the small moments expected, although it does require a lot of expository final chapter dialogue to keep everyone up to speed and it still ends very abruptly. Was an additional chapter really that far beyond the bounds of possibility? Still, a fun read overall, but the art doesn’t always do the story justice.