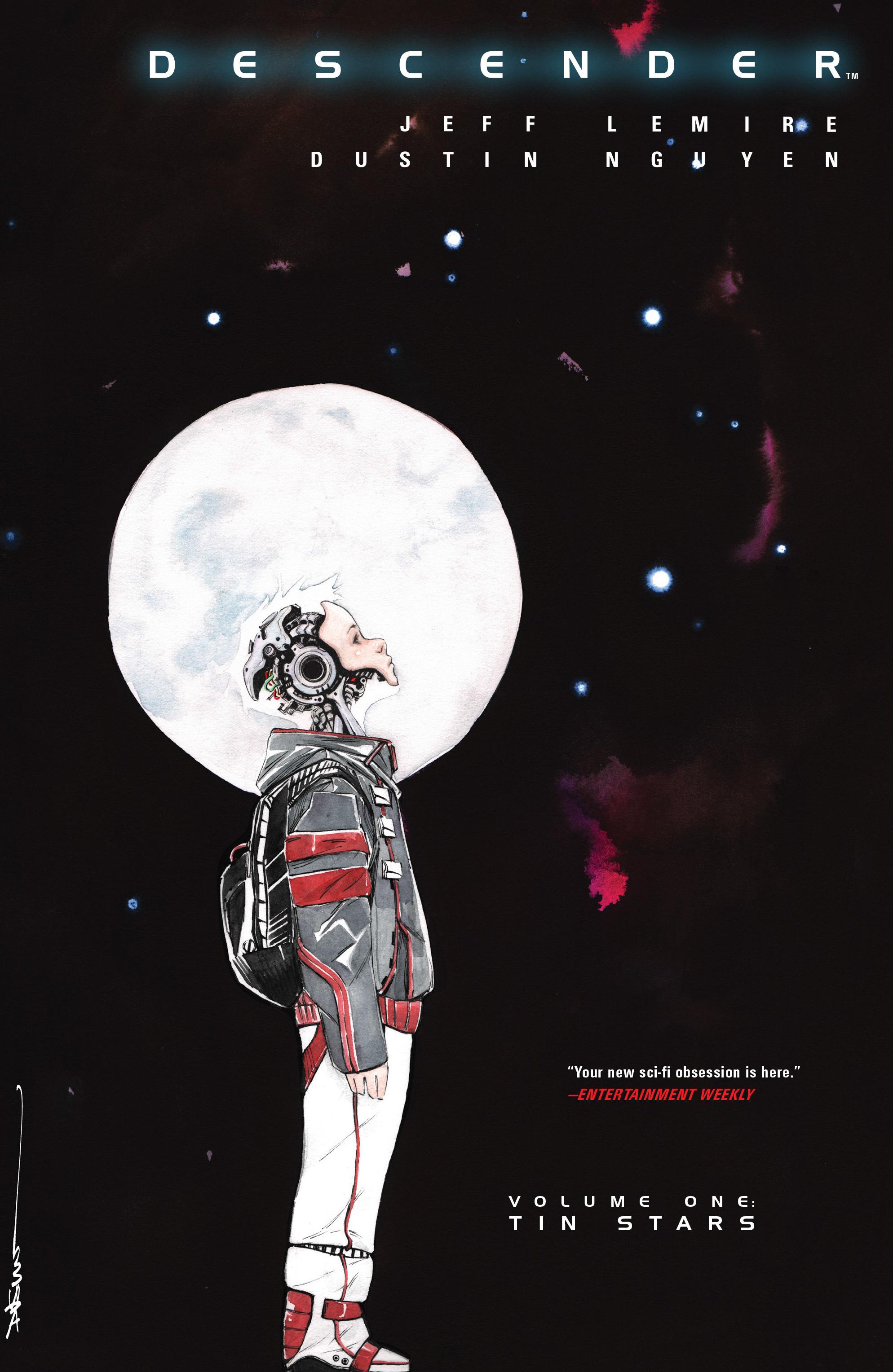 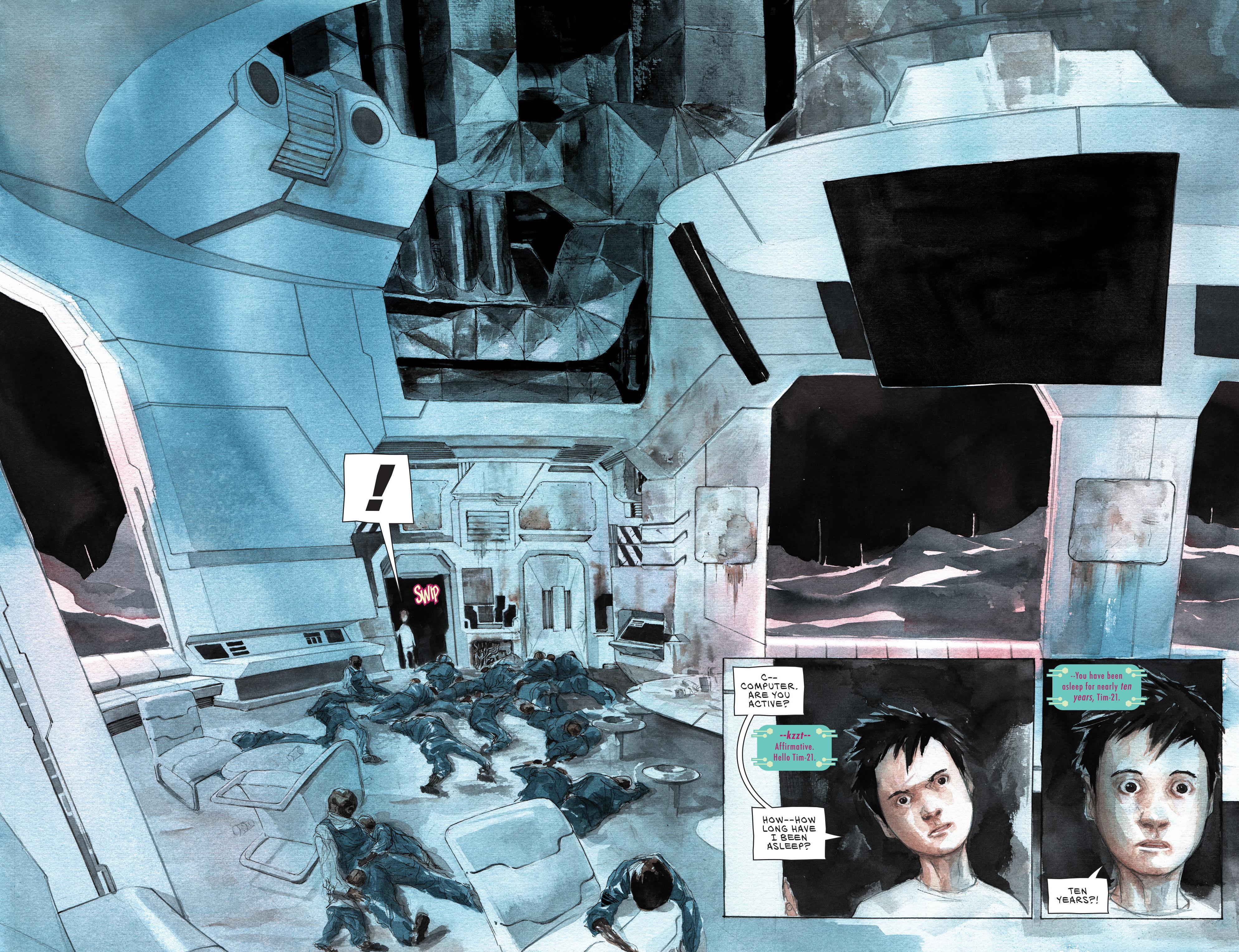 “Ten years after planet-sized robots called Harvesters appeared and wreaked havoc among the galaxy, a young android named TIM-21 wakes from an induced sleep protocol to find that all robots have been outlawed. But TIM may hold the secrets to the Harvesters in his machine DNA and he quickly becomes the most wanted robot in the universe. With bounty hunters and threats lurking at every turn, TIM embarks on a mind-blowing adventure through the stars along with his robot dog, Bandit, and the lumbering mining droid, Driller.”

The blurb on the back cover sums it up, but inadequately. There are far more than three characters here, with far more to Descender than just robots. In a short while Jeff Lemire and Dustin Nguyen’s space opera with a delicate and clever twist has gathered a growing cult following among comic readers and creators alike. There are many reasons for this. Nguyen’s art is attractive, beautiful and startling watercolours mixing on the page. By contrast Tin Stars lacks the usual garishness of science fiction. It’s relatively no frills and yet still looks gloriously futuristic somehow. It certainly looks SciFi but the artful way the story is written means it doesn’t feel like SciFi either. Despite his cast being robots and aliens, they feel very human with their individual personality quirks. Lemire’s characters are varied, the planets intricate and diverse, Nguyen providing the individuality they need. His artistic style reinforces the notion that this is altogether different. Gentle tributes to classic films and stories in the genre are noticeable in the background and dialogue but never blatantly ripped off either. Descender remains impressively unique and very enjoyable. The premise of robots oppressed by humes (humans) is a neat genre reversal that opens up new areas to explore. That potential is un-mined at this point but is magnificently realised in the following books.

Tin Stars, like TIM-21, has soul. Nguyen and Lemire infuse the pages with emotion, character and passion. This ends on a cliff-hanger that leads nicely into Machine Moon but you’re likely to be hooked way before then. For those already with a feeling that this is special there’s the hardcover Deluxe Edition encompassing the first three paperbacks. 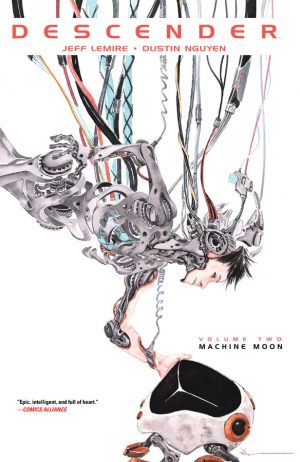 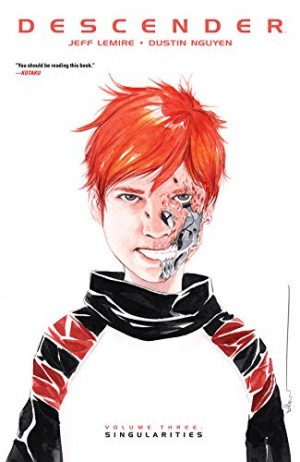 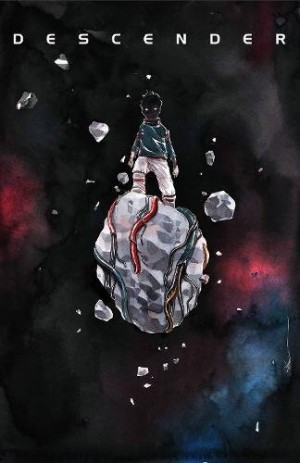