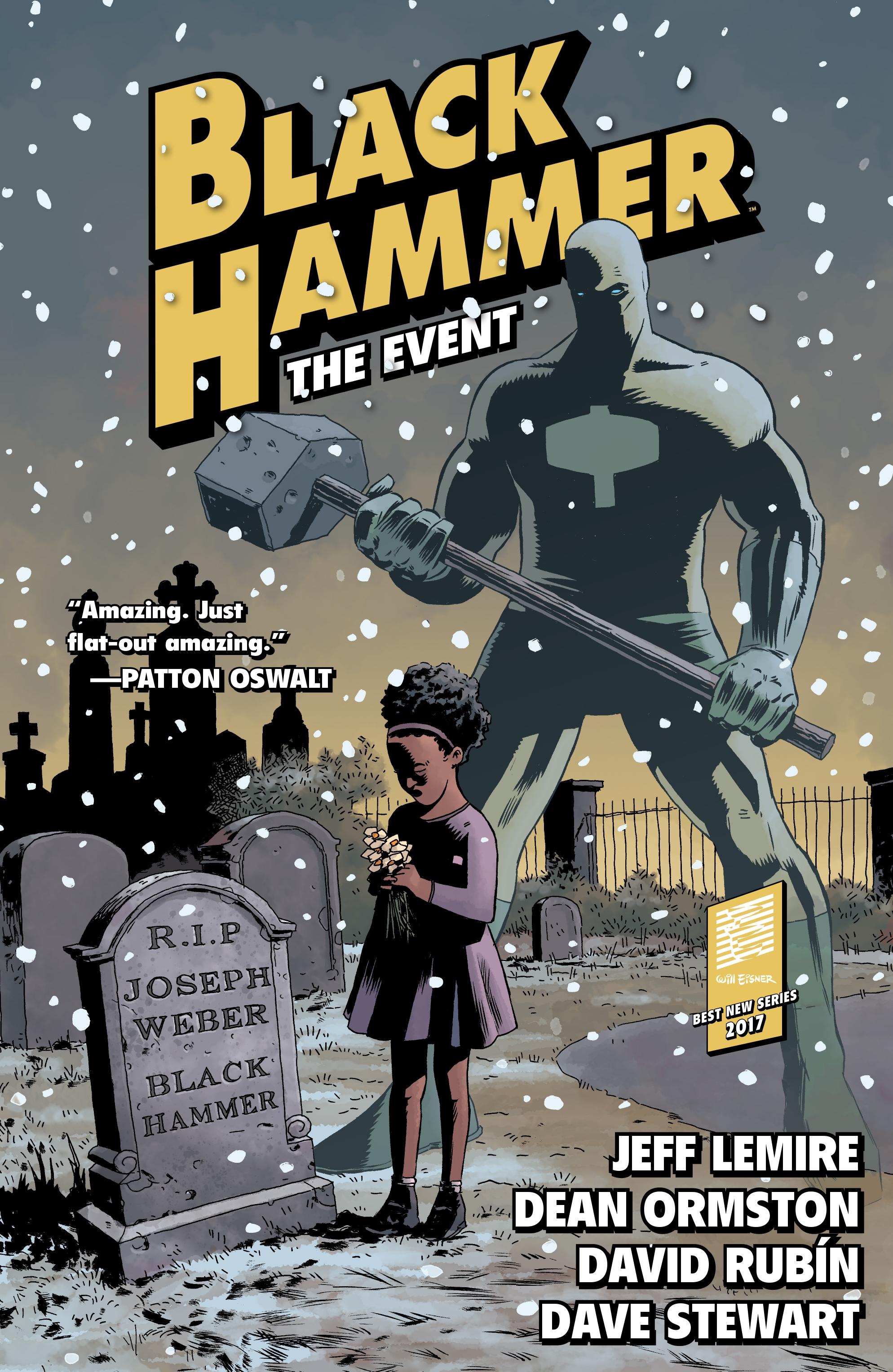 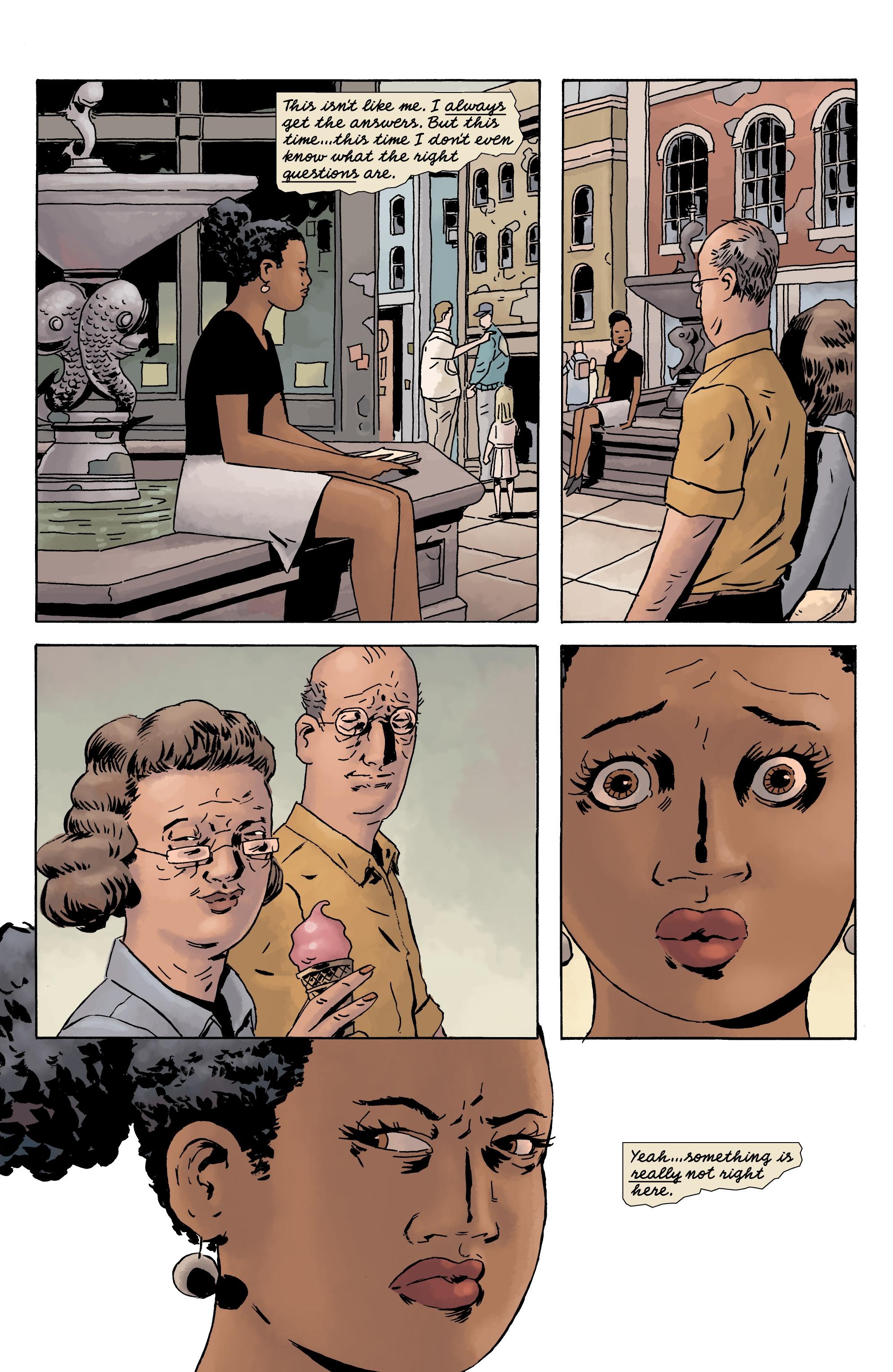 A bunch of superheroes from another world are trapped in a remote farming community on Earth, unable to breach a force field. We learn early that Black Hammer, after whom the series is named, attempted to do so and died, and in ten years none of the remaining crew have worked out a way of avoiding his fate should they try. It’s led to a form of apathy, with those able to mix with the locals doing so with greater or lesser success, and those whose forms prevent fraternisation remaining hidden and becoming ever more embittered. The exception is Colonel Weird, once a space explorer, now perpetually detached from reality. Their way of life has been upturned by the arrival of Lucy Weber, Black Hammer’s daughter, now an adult, and somehow also drawn to their location.

There are numerous fantastic aspects about Black Hammer, the perpetual melancholy, the self-loathing, the frequent surprises, but an extra joy for anyone who’s read a lot of superhero comics is the extrapolation of familiar characters. In Secret Origins Jeff Lemire didn’t conceal that he’s based many of the cast on well known superheroes, mixing and matching from Marvel and DC, and it’s fascinating how he twists their personalties. Barbalien is a gay Martian shapeshifter, Golden Gail is an adult stuck in the body of a nine year old and Abe Slam was once a superbly honed athlete, but failed to come to terms with ageing and we see another of his past embarrassments. For all the super powers, the key character proves to be Lucy Weber. She’s a journalist, so her first inclination on arrival is to start asking questions, and she rapidly notices details that have eluded everyone else. We learn along with her, both via further glimpses into the past lives of the lead characters and their more mundane present day existence. However, there’s enough drama about that to ensure that while it may be ordinary, it’s also compelling because of who’s involved.

As previously Dean Ormston’s art is a gloomy extrapolation of classic 1960s superhero comics, impeccably laid out, stylishly drawn and character rich. Again, there are very few smiles, but tragic eyes tell their own story. Ormston doesn’t draw everything, with David Rubín taking over for a chapter detailing how Colonel Weird first met Talky-Walky. He also works in a deliberately retro style, this echoing the wilder science-fiction comics of the 1960s, effectively creating an alien world.

Black Hammer is a series that invites speculation. Lemire is slowly dropping hints, and The Event ends with a big revelation after an investigation of the prevailing faked mood around town. It remains a compelling series, toying with the familiar, but twisting that very satisfyingly into strangeness. It’s masterful. 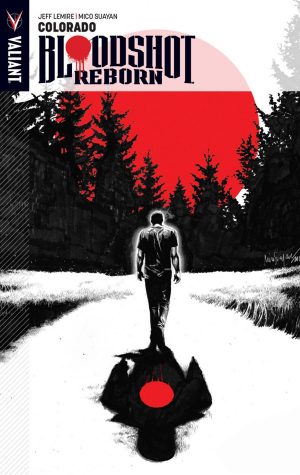