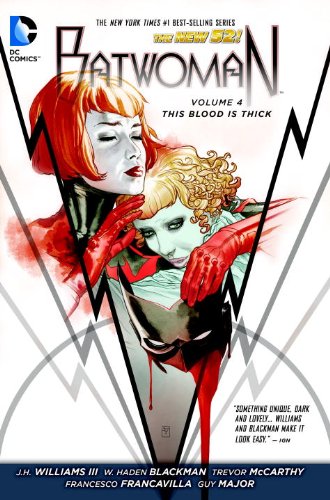 Once again J.H. Williams III relinquishes the art on Batwoman, and once again Trevor McCarthy takes over. Unlike To Drown the World, though, beyond the first chapter there’s a deliberate policy not to emulate Williams III. This may remove a layer of magic for some, but McCarthy’s art is still very accomplished and often decorative without being beholden. The Batwoman magic remains. Well, up to a point, but we’ll get to that.

Two rather surprising elements concluded World’s Finest. The first was Kate Kane as Batwoman simultaneously revealing herself to Maggie Sawyer and proposing. The second was that someone believed dead after the events of Elegy, is alive, if not well, and in the custody of the DEO. This is revealed to Batwoman early and dangled in front of her as both an additional element of control and an inducement to complete a mission that Director Bones really has a bug about.

A simultaneous thread tracks the remainder of the Kane family. Bette is now being trained by father and daughter separately, and there’s also a specific mission in mind for her. The single-minded manipulative methods of the DEO have previously been borderline, but were there any doubts as to their real concern for ordinary people all is laid open here.

There’s a fine intervention scene, an indication of just what a relationship means to Kate, and a chapter drawn very nicely by Francesco Francavilla. That’s another attempt to redefine Killer Croc after his previous participation in this series, and to reconcile his constant changes of appearance (in reality due to artistic interpretation). It doesn’t convince due to Croc never being portrayed sympathetically enough to induce any empathy. It’s a rare lapse on that front.

Controversy surrounds the material reprinted here. The writing team of Williams III and W. Haden Blackman had views about the progression of the cast that clashed with the editorial vision. Unable to compromise, they resigned, intending to finish their plots more rapidly than intended, but in a manner that would still satisfy anyone who’d read the series to date. DC apparently had other ideas, and their tenure ceases with the final page of this book mid-story.

Prematurely dismissing creators due to depart anyway and intending to conclude their would seem a callous contempt for the readership, and leaves a sour taste all round. Whatever the merits of replacement writer Marc Andreyko, his rushed conclusion in Webs pleased no-one.

For most of its run to this point Batwoman has been extremely impressive. What could have been exploitative has been treated with respect and compassion, and despite the derivative title Batwoman is very much her own character. It’s a shame the story being told didn’t reach a satisfactory conclusion, but that doesn’t invalidate what’s here, which is very good.