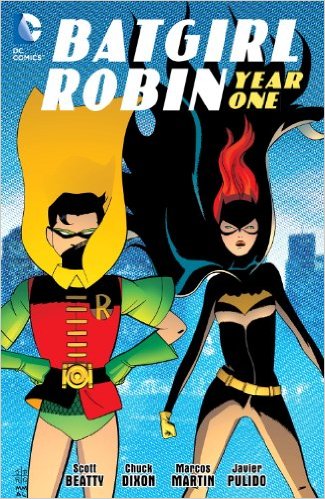 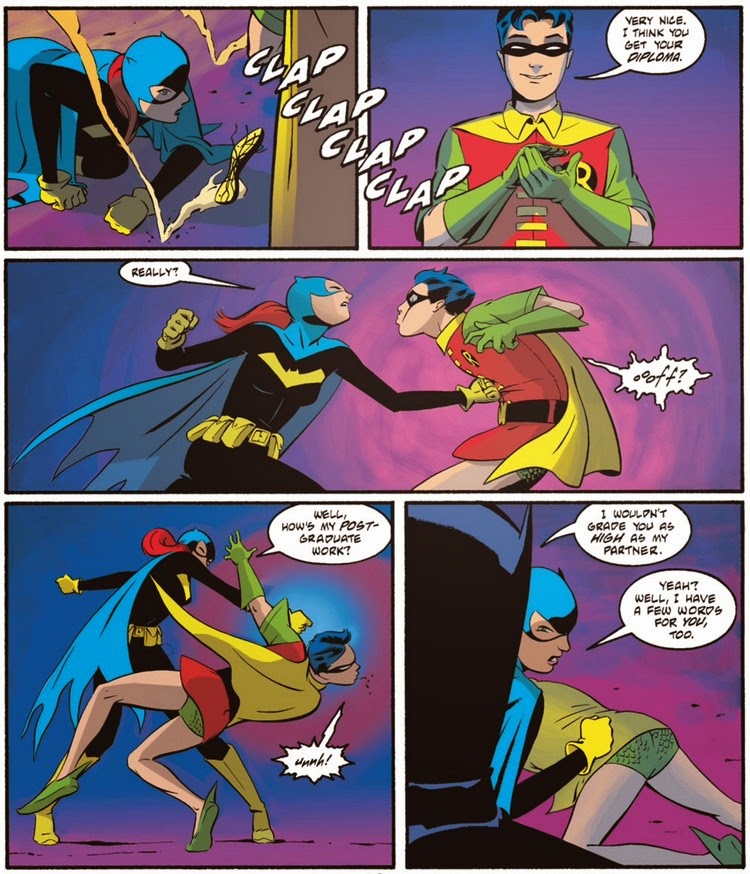 This combination package brings together two tales from early in the millennium spotlighting the first twelve months of Gotham City’s junior crimefighters, previously released as Robin Year One and Batgirl Year One.

Both are deliberately set in a nebulous time zone. Robin, for instance, heads out roller blading with a girl (soon to be kidnapped by the Mad Hatter), yet the Batmobile visible in the Bat Cave is the classic 1950s sedan with large bat mask bonnet ornament. A minor variation on that Batmobile recurs in the Batgirl story, yet Robin is now experienced and Batgirl is able to purchase a personal electronic stun device.

The pairing of stories makes sense, not just due to the shared writing team of Scott Beatty and Chuck Dixon, but because Batgirl’s introduction is very much a progression of elements from Robin’s story. Commissioner Gordon’s relationship with Batman has a greater trust, and Killer Moth has progressed from villainous joke to life-threatening challenge. For a novice at least. And Robin plays a large part in Batgirl’s earliest days, covertly assigned by Batman to monitor her, equip her properly and to tag along to help with her training.

It’s as well the stories are presented in publication order. Javier Pulido’s art on the Robin material is very good indeed, signposting the story in an appealing cartoon style, but were it to appear after Marcos Martin’s work on the Batgirl tale it would disappoint in comparison. Martin’s work is light, delicate and with the appeal of a cold beer on a hot night. His layouts are interesting, and he somehow always manages to generate the idea of space without skimping on background.

Robin’s introduction is very good, but it’s the Batgirl sequence that really shines, and this isn’t just down to Martin. Beatty and Dixon build on the mood instilled in Robin’s story, and progress it, but whereas Robin always knows he has Batman to fall back on, or Alfred at the very least, Barbara Gordon’s Batgirl is a covert operation from the very start. She’s thrilled when she accrues allies, offering some excellent cameo sequences, and despite being provided with equipment by Robin, or Pixie Boots as she endearingly refers to him, her development is primarily her own.

The choice of villains provided is appropriate. The writers steer away from Batman’s heavy hitters and we’re presented with Killer Moth, Firefly, Mad Hatter and Blockbuster. The one exception is Two-Face, responsible for an anomalous step into brutality out of keeping with the overall approach.

Some like their superhero art to be more realistic, but for anyone else who enjoys a generally good-natured superhero story, this is a worthwhile book.