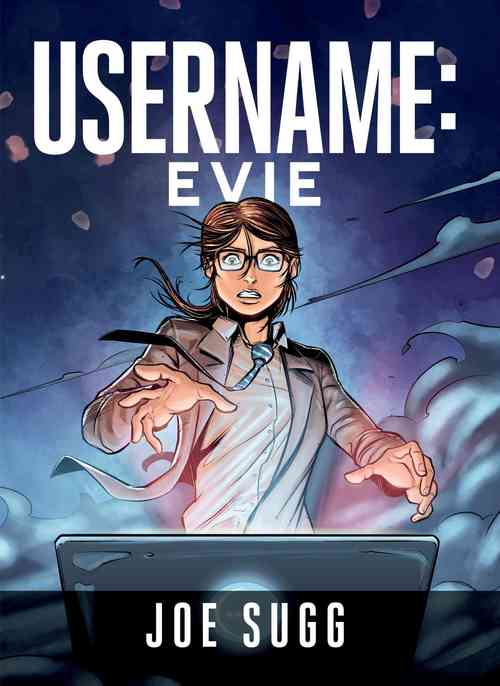 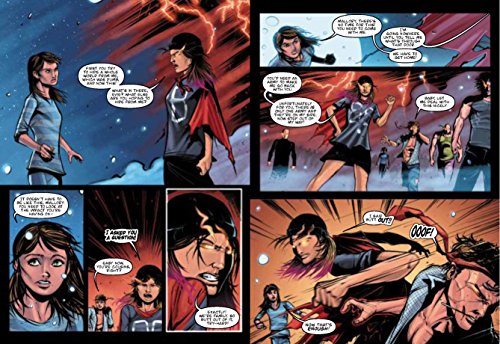 Username Evie is the debut graphic novel of Youtuber Joe Sugg. However, he’s not the only creator despite his name alone on the cover. He conceived the storyline and characters, but there were separate artists, writers, colourists and letterers. They are credited on one of the first pages under the ‘Sugg’s Squad’, but this is easy to miss and would be better suited on the front cover alongside his name so as not to mistakenly assume Sugg single-handedly created the graphic novel.

The premise concerns a dying father who creates an online system for his bullied daughter to escape into. In theory the plot is cool, technological and contemporary, however, in practice it fails to impress.

The main let down is characterisation. No one is particularly memorable or likeable other than the father and Unity, who act more as omnipresent figures than relatable protagonists. Evie is a supposedly bullied nerd, but aesthetically is a generic hot girl once her glasses are removed. She is bullied by her cousin Mallory who is characterised as the attractive, popular girl. Strangely, and confusingly the two characters look really similar, the only difference being Mallory wears a hat. Mallory’s contribution to the story is rather vague and she seems to be mean just for the sake of it, until the finale in which she has a personality overhaul in the space of a panel.

The digital world of E.Scape turns into more of a nightmare than a safe haven as Mallory’s cruel influence manipulates the world leading it into a chaotic and destructive revolution. She even picks up a cape on her journey to evilness so you know she means business. Evie must fight to save it, but in doing so risks losing her only chance at a perfect world, and her last connection with her Dad.

The biggest criticism is that Amrit Birdi’s art and Matt Whyman’s text don’t often work together well or the creators simply do not trust each other enough to let one guide the storytelling. For example there is a particularly annoying scene where Mallory is mad, which we know from the narrative and art, however rather than trust the reader to follow the story, a pointless thought bubble with ‘fume’ is added. This overwriting and such overload of information occurs several times throughout the graphic novel.

Overall, Username Evie is far from compelling, but includes some noteworthy parts. Despite difficulty distinguishing characters, Birdi’s art is gorgeous. It is bright, colourful and bold and highlights both the beauty of E.Scape and the darkness and destruction threatening to consume it, however this alone isn’t enough to save the overall reading experience. Username Evie is neither terrible or fantastic. It’s okay. Evie should maybe crawl back into her fridge for a bit (yes she genuinely climbs into her fridge when she is upset) and chill out before this gets another read.

Despite misgivings, this has proved popular enough to spawn a 2016 sequel, Regenerated, again neglecting to cover credit the people who wrote and drew the graphic novel.