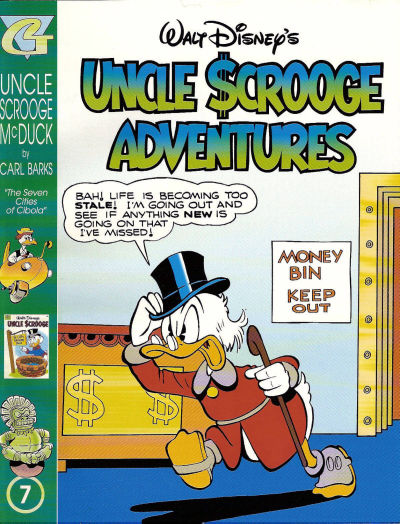 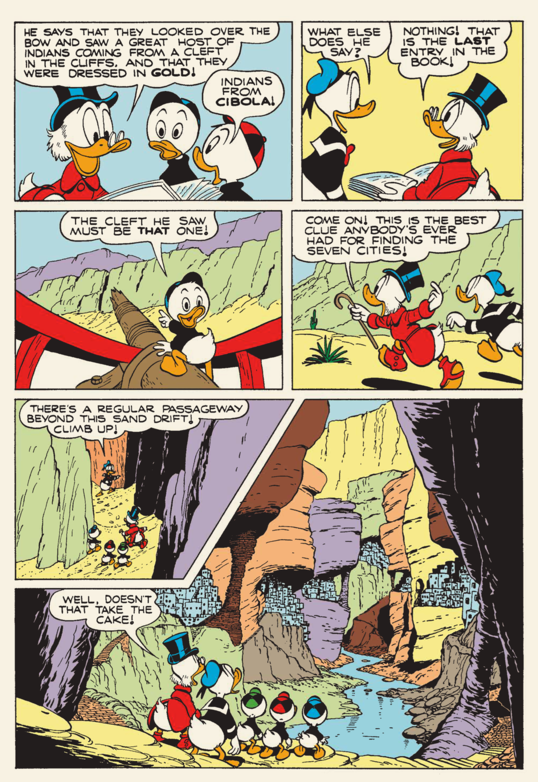 ‘The Seven Cites of Cibola’ is a highly regarded story among Carl Barks aficionados, and with good reason. While there’s a case to be made for the previous ‘Tralla-La’, this, from 1954,  is the first of the great Uncle Scrooge exploration stories. To this point Barks had produced notable adventure tales, but this has the full package of an exotic location, a quest for treasure, villainy afoot, and bravery and resourcefulness throughout. There’s an even a cameo for wacky inventor Gyro Gearloose, who’d have his part to play in later Uncle Scrooge stories.

Matters are set in motion with Scrooge seeking a new challenge. Everything in Duckburg already relates back to him, and so efficiently is his business run (although it’s depicted as being maintained by a single man with a phone and a ledger) that it’s purchasing patents before he can do so personally. Donald Duck with nephews Huey, Dewey and Louis chance upon him in his misery and brighten his day by asking him to join them on an expedition searching for Indian arrowheads. From that introductory trip a far more expansive tale emerges with Barks weaving together two Arizona legends and throwing in the Beagle Boys for dramatic purposes.

It’s been claimed that a well set-up sequence toward the end of the tale inspired the opening of the first Indiana Jones film, which may or may not be true. Certainly George Lucas and Stephen Spielberg are both fans of Barks’ work. More important is that it works perfectly in situ. From the moment the fiendish mechanism is introduced and explained we’re all waiting for it to activate, and sure enough…

A rarity is the inclusion of a recognisable human being not requiring the black round nose Disney usually insisted on. This is Al Koch, who at the time managed an Arizona welfare office, and in a nod to his informing Barks of the legends and historical background, Barks depicts him booting the Beagle Boys off welfare.

Anyone who’s never sampled one of Barks’ Uncle Scrooge stories is directed here. If this isn’t to your taste, it’s unlikely many others will be. Those able to awaken their inner child, however, will still be impressed by the tight plotting, good gags, great cartooning and solid conclusion.

It’s possible to locate this as an individual album, along with accompanying trading card, but the story is now better purchased along with several others in the 21st century Fantagraphics collection The Seven Cities of Gold. There it’s contextualised and that volume is available at roughly the price this slim album now fetches.